Twelve years ago, just a few weeks after we got married, Craig and I got our first dog together. Despite him eating through our floor, walls and multiple dog beds, Sam was truly loved.

He was still a frisky puppy when Aidan came along two years later. By the time Ry was born he had settled and was content just to quietly hang out and play fetch and shake a paw. He was the ever-dependable watchdog when the boys were in the pool and never far when they were out in the yard. A constant companion that you imagine will always be there.

Flash forward to this past February. After taking him to the vet for a lump on his throat we found out he had cancer. Within a few weeks we’d be faced with the excruciating decision of when to put him down. 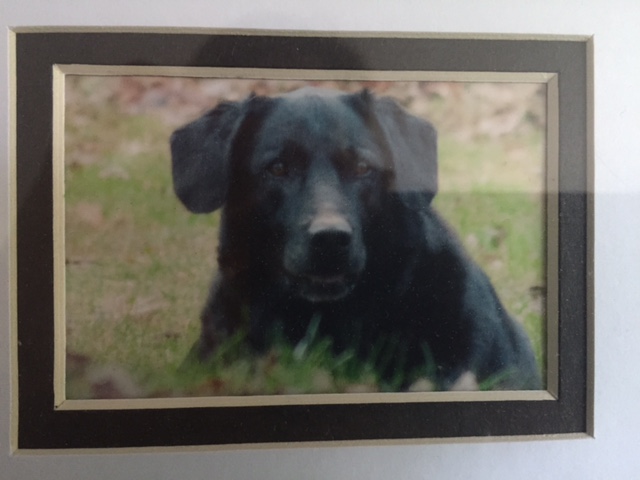 What would we tell the boys? I felt this immense pressure to get it right as if it would forever shape the way they dealt with death. We decided to just be honest with them and explain that there was no medicine to make him better and that we were only going to have him for a little while longer. There were lots of tears (mostly mine) and lots of tough questions like “what do you mean you’re going to kill him?” (dagger to heart). The next few weeks were hard as we tried not to think of losing him and how quiet it would be with him gone. The boys worked through their feelings by making cards for Sam, lighting candles around his picture on the mantel, and asking for special photos to be taken with him to help them remember him. He was showered with love, extra treats, and snuggles. We even dug through 10 feet of snow to find his favourite rocks for him to lick and drag around.

When the day came to say goodbye, I was a basket case. We made the appointment for the afternoon so we could spend the morning with him and say our goodbyes. The boys were sad but did great and seemed to accept the fact that we were doing it out of love. We gave them the option to come with us to the vet but they decided to stay home with my Dad and make what I thought was going to be a small discreet white cross for Sam. The finished product measured over 5’ tall! Now that’s love!

A few months have gone by now but he still comes up in everyday conversation and it’s obvious he is still on our minds. The eventual arrival of spring was hard as the melting of the snow revealed lots of reminders of Sam in the yard with his collection of rocks and sticks. We’re still getting used to people arriving at our door without his welcoming bark to announce them. Recently at our annual Relay for Life cancer fundraiser the boys even decorated one of their luminaries “In memory of Sam, our loved dog.” 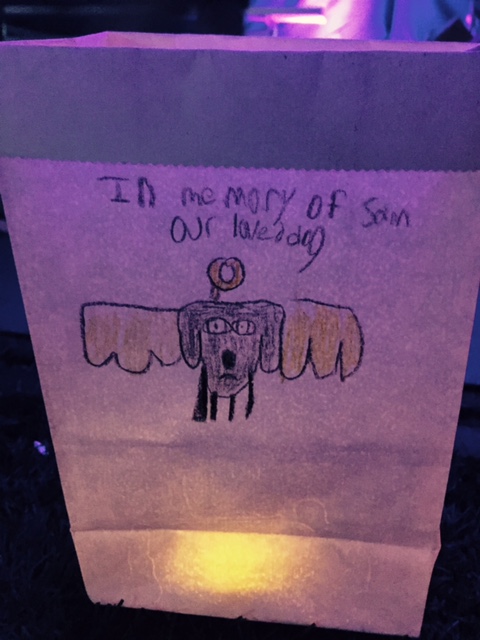 The topic of getting another dog comes up every once in awhile, but I’m not ready yet. The truth is kids are much better with grief of any kind than adults. I’ve heard grief be described like a boulder and that kids are much better at picking it up and carrying it around for a while, putting it down to enjoy life, and then picking it back up again. After me worrying how to guide them through the loss of their first pet, it seems they naturally may have had more to teach me this time.

Tracy is a self-employed Mom of two boys, trying to get it right the first time. By day, helping companies tell their stories through words, media and events. By night, navigating the world of Lego, Minecraft and Harry Potter.