I finally had a chance to watch NBC’s new singing show The Voice over the weekend and I have to say, I’m really impressed.

Obviously, this was a preemptive strike from NBC and Mark Burnett to compete with Simon Cowell’s upcoming show The X Factor as well as with American Idol. It’s too early to tell how well The Voice can stand up to a show like Idol – after all, we’ve only seen one episode – but the two-hour long premiere was exciting enough to pique my interest. I’ll definitely be watching the judges round out their teams of eight tonight. 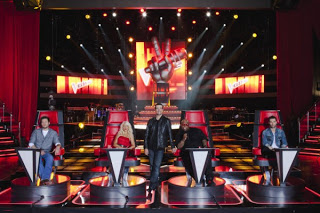 I love the premise of The Voice. The four judges coaches sit in giant, awesomesauce chairs with their backs turned to the singer auditioning. This is the first really cool thing about The Voice – it’s a blind audition. The coaches all have actual cred, too – Christina Aguilera (you must know her), Cee-Lo Green (Gnarls Barkley, “F— You”), Adam Levine (Maroon 5) and Blake Shelton (country music). When the coaches hear something they like, they buzz in and their chair swivels around. The anticipation to see whether someone will buzz in was surprisingly intense, and it was kind of heartbreaking when no one did.

Considering how I usually hate audition shows, I was surprised how quickly The Voice drew me in. These were call-back auditions, so there were no cringe-worthy awful auditions that American Idol has always thrived on. I know a lot of people watch Idol specifically for those, but I’ve never been a fan. I liked watching the coaches as they tried to decide whether to buzz in for a singer or not. Not only was the anticipation great, as Christina’s hand would hover over her button only for her to change her mind, but it was great to recognize that moment, that stylistic choice a performer would make, that would cause you and the coaches to think “Yeah!” So often the judges would buzz in at essentially the same moment, because of some interesting choice the performer had made, or an incredible note that was hit. It was fun to watch.

My only complaint was that the talent was good, but not outstanding. Hopefully as the competition continues and we see the coaches help develop this performers, I’ll become invested in a few of the ones who shone with potential. Tonight we’ll see another audition episode, and at the end of the two hours each coach should have eight people on his/her team.

Then, the show will shift gears. This will be the test to see if The Voice can really stand up to American Idol. The singers will battle it out by singing the same song in a cheesy boxing ring so that the coaches can whittle their teams down from eight to four. This could be fun to watch as there will likely be some difficult choices for the coaches. Then it gets turned over to the voters, and I’m hoping the competitive spirit among the coaches will really heat up there. Not only will one performer win, but the coach who mentored that singer wins as well. Glory, at least. None of them need money.

Are you watching The Voice? What do you think of the show?

Catching Up on The Voice
https://haligonia.ca/catching-up-on-the-voice-37248/