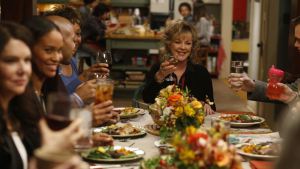 It’s been a while since I’ve written about Parenthood, mostly due to scheduling. But I’ve been watching it all season, and I still love the show as much as I always have.

The episode from two weeks ago, “Limbo”, was one of my favorites. I always love when there’s an excuse to bring all the Bravermans together, and a christening was as good a reason as any to do it. In fact, it was perfect because having christening-related events spiral out of control (a dinner, the actual christening, and a brunch) was a good way to poke fun at how ridiculous the Braverman family can be sometimes. It was summed up well when Sarah, working under a looming deadline, sighed at the craziness of it all when she was invited to the night-before-the-christening dinner.

This was the first big family event since Joel left Julia, and I felt like that delivered a lot of strong material. Although at this point, I think the pendulum has swung too far towards Julia being the victim and Joel being the villain.

I got a laugh out of Amber and Drew showing up high to dinner, particularly because they just played it so well. It added some nice levity to an otherwise heavy episode.

There have been some great storylines this season – Sarah figuring out her professional life, Joel and Julia’s failing marriage, Zeek and Camille debating whether to sell the house. But with only four episodes left in the season now, I’m hoping we get a little bit of movement on some things.

In “The Offer”, I had a few more problems with the episode even though it had a really strong (and incredibly sad) Max storyline. I usually like Amber and Drew storylines so much (although Drew’s love triangle has gotten a little too much screen time this season if you ask me), but this week it kind of rubbed me the wrong way. I liked Amber taking in Drew, and I liked when she became annoyed at him taking advantage of her coolness and hospitality. Skipping class and smoking a joint at 11am doesn’t seem like something Amber would put up with from her baby brother. I thought she was too sympathetic when he whined that he was sad about Amy, and the vibe got weirdly romantic when Drew played Amber his crappy song. The scene definitely didn’t have a brother-sister vibe.

Two other storylines – Joel and Julia’s marriage, and Zeek and Camille’s house sale – felt kind of stalled in this episode. They were featured, but there was no movement. So that wasn’t my favorite.

But really, the episode was about Max. I haven’t been completely thrilled by the Adam, Kristina and Max storylines this season. Too often, I think Kristina, particularly, comes off as an entitled bully. She expects Max’s more difficult behavior to be just accepted by others, rather than focusing more on working with Max. I thought that was the worst it had been in “Limbo”, when Max and Sarah had an argument at the photography store. Max was out of line, and faced no consequences. The whole family was mad at Sarah instead. 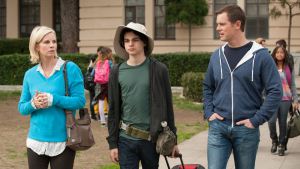 But then the writers come up with a storyline like Max’s field trip, and none of that matters. It was so heartbreaking to see Max so aware of his isolation, without being able to really understand why he’s treated so poorly by his peers. (Because they’re assholes, basically. Because teenage boys are assholes.)

Even when I have mixed feelings about aspects of Parenthood, I still love the show overall. I have concerns over the previews for next week – I mean, Jason Ritter? Again??? Just let that relationship die already. What do you guys think? Has Kristina been a little insufferable at times? Did you get a weird vibe from Amber and Drew this week?

Checking in on “Parenthood”
https://haligonia.ca/checking-in-on-parenthood-91157/