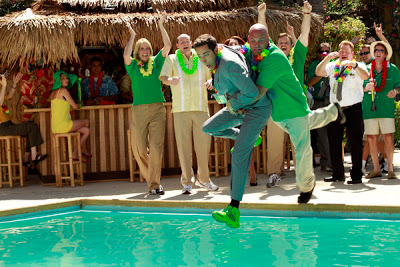 I was worried that the fifth and final season of our beloved Chuck was starting off on shaky footing, but it was only the first two episodes that had me feeling nervous. As I said in my last review, the third episode “Chuck vs. the Frosted Tips” felt like a return to the show I know and love, and Friday night’s “Chuck vs. the Business Trip” redeemed any less than positive aspects about the season so far.

I worried that Morgan having the Intersect in his brain had changed the tone of the show, but since the Intersect is now gone and we basically have the real Morgan back, I like where that storyline took us. The CIA called off the hit on Morgan, but one assassin had been hired who couldn’t be called off. So Chuck and Sarah devised a plan to take down the assassin, someone who’d never had an incomplete mission.

They attended the Buy More Employee of the Year convention, with Chuck posing as Morgan Grimes. As they searched the crowd for a disguised assassin, they also realized how nice it was to hang out with normal, friendly people. They joked about how Jeff had been suffering from carbon monoxide poisoning all along and was now a normal person (by far, my favorite Jeffster storyline to date, by the way) as they sipped margaritas poolside. Chuck thought they caught the assassin, who was disguised as a bartender, but that turned out to be a decoy. The real assassin was a woman who befriended Sarah, and she got dangerously close to killing both Sarah and Morgan.

This storyline hit all points of the Chuck trifecta – comedy, action and heart, but the real payoff was where it led us.

It was interesting, because at one point during the episode I wondered to myself “Once upon a time, people did get killed on Chuck, right?” I mean, I remember Chuck himself not wanting to use a gun, but other than that people died. And there seemed to be a noticeable lack of bloodshed so far this season.

And then, as everyone gathered at Awesome and Ellie’s for dinner, we saw Casey with a sniper rifle, spying on the assassin and her crew. Even though the CIA had confirmed with her that the hit was off, she wanted anyone who knew her real identity killed. That meant Sarah, Chuck, Morgan, Casey, and Casey’s daughter Alex – Morgan had called her to the Buy More so he could apologize right before the assassin showed up. Decker, our scary CIA enemy, confirmed that she could take out all those people except Chuck and Sarah. Interesting – veeeeery interesting. Casey was spotted by the assassin and her pals, but it didn’t matter. This is John Casey we’re talking about. He took them all out before they could even blink. It didn’t even cross my mind that without the protection of working for a government agency, Casey and the rest of Carmichael Industries couldn’t legally kill anyone.

Casey joined his friends at Ellie and Awesome’s apartment, where Sarah made a warm toast about how she realized she really did have friends, ones she could be honest with. Awww. Except half the people in that room were lying. Awesome was pretending he couldn’t handle paternity leave when really he knew Ellie hated being back at work. Casey lied to everyone about the mission he’d just been on, and knowing what would happen, he told Morgan to move back into the apartment and even gave him a gift. (Some lies are for the best though, I’m glad Casey only gave Morgan the first three Indiana Jones movies.)

And then the cops showed up and arrested Casey for murder, and I was shocked. How did I not see that coming? Casey sacrificing his freedom in order to save his daughter’s life and the CIA wanting Chuck and Sarah kept alive have set up Chuck for a very exciting journey to the finish line. I can’t wait to see how they’ll save Casey and take Decker down.

There were a lot of other things I liked about this episode that I haven’t mentioned, too. I love Jeff’s new, normal persona and how it’s brought Lester to such a place of desperation that he tried to poison both Jeff and Big Mike. Jeff’s a levelheaded dude now, so he reported Lester for attempted murder. He was also quick to pick up on the fact that Ellie was miserable being back at work instead of home with Clara. But can this clarity last? I’m a fan, but I have a feeling the writers will reunite Jeffster before the series concludes. It was really sweet to see Awesome pretend like he was the one who wanted to change roles, instead of making Ellie have to admit she wasn’t ready to work yet. I was also happy to see Alex forgive Morgan, even though learning the truth about the Intersect and how it melted his brain meant that she doesn’t want to get back together with him…for now. Alex may think she doesn’t want a spy for a boyfriend, but I think those crazy kids will be back together before the series finishes.

So what did you guys think of “Chuck vs. the Business Trip”? I liked the episode a lot, and I think it has set up some interesting questions that the show will need to answer before it’s gone forever.