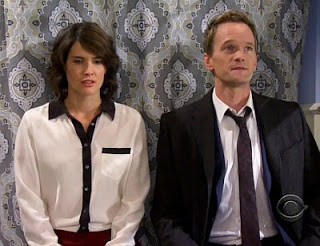 Last night’s episode of How I Met Your Mother seems to be incredibly divisive. I, for one, loved it. I loved the whole episode, and I am completely on board with (and was totally shocked by) the bomb dropped at the end: Robin is pregnant.

I immediately tweeted about the episode (spoiler free, for the West coast-ers) and Facebooked my fellow TV lover Allison, and the reactions I heard in my social media circles were all positive. Like me, y’all were psyched. However, I’ve read a couple of reviews by other TV critics and they weren’t happy with the development at all. One called it a soap opera twist, and another looked back at the first episode (I think it was the first episode) of the series when Robin told Ted she wanted her life to be an adventure, and said she wanted to live in Argentina and Tokyo, and wondered how we got here.

I’ll tell you how we got here: the characters grew up. You know what? I used to want to be a for reals journalist. I thought I was going to go to Africa and report on poverty or war or rebellions. But I didn’t, and now I’m older. I have a job I enjoy and a blog that I love, I have friends and family and a boyfriend and someday soon I’ll want a baby. People grow up. And that’s what this whole episode was about.

Marshall and Lily revisited the idea of moving to Long Island, this time clear of pregnancy brain. It was a much less obnoxious storyline this time around, and was actually incredibly funny as Marshall and Lily returned from the suburbs to find their apartment had shrunken to an unbearably small size. Robin was trying to convince them not to go, but with even the smallest hand gesture she’d knock over yet another lamp. 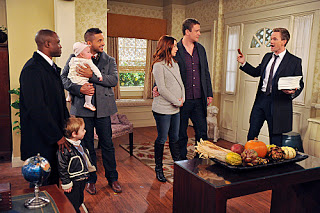 Meanwhile, Ted and Barney drunkenly decided that it would be a great idea to “bro-parent” – to adopt and raise a child together as two straight, single dudes. The plot was played equal parts funny and serious, since the guys started off drunk but still liked the idea when they were sober the next day. Sure, they knew it was crazy, but as ted reiterated a few times, they were both in very dark post-breakup places. Barney even borrowed his brother’s baby to prove to Ted what a good father he’d make.

Everyone convened at house in Long Island for Thanksgiving dinner, where Robin threw a fit over the idea of her pals really moving and locked herself in the bathroom, and James showed up with his adorable husband and older kid to reveal that he was the father of Barney’s mystery baby. (LOVED that Ted and Barney named the baby Hurricane.)

Marshall went to talk to Robin and knew her antics were about more than just he and Lily moving, but she didn’t open up to him completely. She simply told him that maybe she needed them more than they knew. I liked seeing that moment – Marshall and Robin have never been BFFs (remember, they only pretty much talk about hockey, right?) but he is still a supportive friend and he knew something was out of whack. It was when Barney came to check in on her, and to ask if they were still friends (awwww) that she told him. She’s pregnant.

And the episode was over. Oh, how I wanted it to be back-to-back episodes. I want to know what happens! Since I doubt Kal Penn is planning on doing too many more episodes of HIMYM, I don’t think the baby is Kevin’s. I hope this means it’s Robin who Barney is marrying in that scene we saw. If it’s not, then I’ll break up with this show forever. But more importantly, I’m impressed that HIMYM was willing to go here. Marshall and Lily are married now, and it took the show years to decide to let them have a baby. It knew that while the couple would at some point have to take the plunge that most married couples take, doing so would also change the tone of the show. Robin’s pregnancy suggests that they’re really ready to do that. HIMYM is becoming what Friends probably would have been once it finished – a group of friends who have gotten married and are having kids settle down outside the city. Sure, with two babies around it means the gang will spend a lot less time at McLaren’s. But maybe this is also a sign that the show is getting ready to put Ted in a relationship with The Mother, and I’ve said many a time that I’m ready to see that courtship unfold.

And for that reason, I’m excited about this new development. I like that the show is pushing characters forward rather than keeping them in a constant, stagnant place and I can’t wait to see what happens from here. These past few episodes of HIMYM have been so great, I’ve almost even forgotten about Zo-you know what? I’m not even going to say the name.

OK, this episode was a big one so be sure to let me know what you thought in the comments section below! And check out this list of my favorite quotes and moments from “The Rebound Girl”:

How I Met Your Mother: Brave Baby Bomb
https://haligonia.ca/how-i-met-your-mother-brave-baby-bomb-49331/