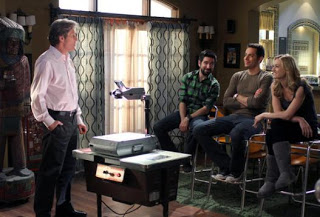 I know this season of Chuck has felt a little scattered (for example, no Ellie and her magic laptop this week) but I don’t think you can deny that “Chuck vs. The Wedding Planner” was all kinds of fun. I really like Gary Cole as Sarah’s dad, and I really like what he brings out in Sarah and Chuck.

When Sarah and Chuck got scammed by their wedding planner for over $25,000, they went rogue on the CIA to track her down. Chuck faked a flash and accidentally faked a connection between the wedding planner and a super dangerous villain. They were caught, suspended, and left to try and catch the real villains Chuck later flashed on all by themselves.

The show was chalk full of hilarious moments. Spy high five? Yes! And Morgan telling Chuck that Casey probably wouldn’t attend the wedding because their invitations looked like socialist literature. And Sarah’s dad inviting himself over to Awesome’s apartment. And though Sarah doesn’t always get the most comedic moments in this series, Yvonne Strahovski had be cracking up with her impression of Chuck flashing.

But it was a sweet episode, too. I loved the flashbacks to Sarah’s childhood when she was a con artist in the making, and I cannot be the only person who had a sudden allergy attack and got all sniffly when Jack left the piggy bank on Sarah’s bed, with a note saying that he’d never taken any of her childhood savings – only added to it.

My one complaint is that I think Casey got shortchanged on his storyline. To jam his reunion in with Kathleen in the midst of all of Chuck and Sarah’s drama was unfair. No wonder he tried to join a different team. I’d been looking forward to the two of them reuniting, but it just felt rushed and undercooked. Maybe if Kathleen had been able to think for a little longer that Casey had left her and Alex for a lousy security job and moonlighting at the Buy More, then her realization that he is the hero Alex had described would have more of an impact. I hope this storyline gets fleshed out a little more before the season ends.

The fake wedding that Sarah, Chuck and Morgan put together with the help of Jack was fun, and I was glad that he ended up saving the day when the chips were down. I really hope he shows up for the wedding.

We only have three episodes left in this season, and it looks like next week Ellie will make some sort of breakthrough with her dad’s computer. I’m a little worried that we won’t have time to do Ellie justice AND have a wedding in just three episodes, but Chuck does have a history of ending with a bang. And since the season finale is titled “Chuck vs. The Cliffhanger”, I really hope this show gets picked up for a fifth season.

Chuck: Father of the Bride
https://haligonia.ca/chuck-father-of-the-bride-36629/