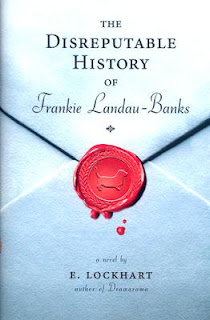 Do the famous quotations, “Carpe Diem” and “O captain, my captain” take you beyond their literary references and straight to Dead Poets’ Society? Does the phrase “In omnia paratus” instantly conjure images of Gilmore Girls’ Rory and Logan, dressed to the nines and jumping from a scaffold with parasols?

The commonality here is the atmosphere of the boarding, or super elite, school, as well as the secret group that unites people together in excitement and enjoyment of life. These are merely the screen references that kept running through my head while reading The Disreputable History of Frankie Landau-Banks; the books are coming below.
In E. Lockhart’s wonderfully clever YA novel, Frankie is a sophomore at a prestigious prep boarding school in Massachusetts. For most of her life Frankie, so named for the son her father wanted, has been overlooked or dismissed as just a pretty girl: kind of scrawny, not too smart, and altogether unremarkable. Now, however, she’s filled out, she’s realized that she’s actually pretty damn smart, and possibly a whole lot more trouble and diabolically creative than her male counterparts. So she infiltrates their secret society, stages elaborately conceived pranks, and proves to the boys that they never should have underestimated her.
The setting, the mood, the strong characters, and the intelligent writing and storytelling are reminding me of a few other titles.

I think it’s primarily the school setting, but also the humour and the feminism that remind me strongly of my favourite John Irving title, The World According to Garp. There are also setting and thematic similarities to Zadie Smith’s On Beauty, especially in terms of the intellectualism and activism of some of the characters. Frankie’s intelligence, tenacity, and spirit also remind me very much of the young heroine of The Sweetness at the Bottom of the Pie. 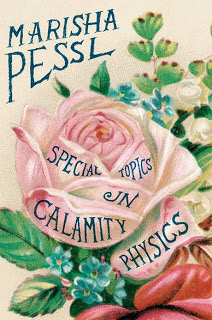 Most strikingly, I think The Disreputable History has much in common with Special Topics in Calamity Physics by Marisha Pessl. In the latter, Blue van Meer, the daughter of a college professor, is incredibly literate and practically has the vocabulary of a dictionary. She falls into a friendship with an eccentric and secretive group of students and participates in their daring lifestyle until the stakes become too high. What starts off as a tour of classic literature and the life and times of students at an exclusive school becomes a twisty turny mystery as well as a coming of age story for Blue.

Both Lockhart and Pessl have created collegiate worlds filled with interesting and complex characters who engage in thrilling and daredevil escapades that might be fun but most of us are probably much better off reading about than actually doing ourselves.