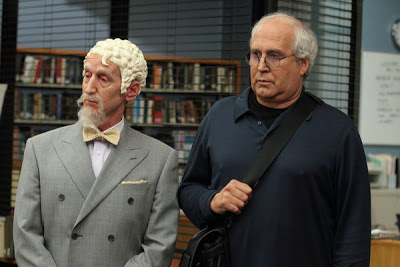 After a few fantastic episodes that also highlighted the dysfunction within our favorite little study group, Community delivered an episode that reminded us these kooky folks also enjoy each other’s company. “Advanced Gay” wasn’t the most creative episode of Community I’ve ever seen, but we’ve gotten enough of that lately. This was just plain funny.

My favorite storyline was actually the B-plot, in which Troy was recruited by Greendale’s rich and powerful air conditioner repair school. Turns out the jock-turned-nerd has a natural knack for fixing things, and that meant he was coveted not only by the intimidating Vice-Dean Laybourne played by John Goodman, but also by a friendly plumber. It was funny to find out how gifted Troy is at repairing things, but it was also an interesting addition to the progression of everyone starting to discover their majors. Britta has chosen psychology and is horrible at it. Troy is talented and can go in two directions, but ultimately decides to put off the decision and just watch TV with Abed. At some point, he and everyone else in the group will have to choose.

The main storyline with Pierce and his dad wasn’t my favorite, but pretty much worked. Pierce discovered that Hawthorne Wipes had become incredibly popular within the gay community and, because of the extra sales this brought in, embraced the idea. But then his weird, racist, homophobic dad stepped in and put the kibosh on Pierce’s pro-gay initiatives. In a reflection of his own daddy issues, Jeff stepped in and stood up to Pierce’s dad since Pierce wouldn’t do it himself, and kind of ended up killing the old bastard.

Since we saw Pierce have a difficult time accepting his mother’s death in an earlier episode, it was interesting to experience the other side of the coin in how he reacted to his father’s death. It was mostly just a relief, and Pierce’s eulogy was, shall we say, a little less than tender. He told his dead dad to suck it.

Even if I didn’t love the whole “Jeff and Pierce both have daddy issues” plot, it did provide a lot of jokes and, frankly, that’s why I tune into Community in the first place.

What did you guys think of “Advanced Gay”? Are you into this air conditioning repair school annex plotline? And of course, check out my favorite quotes and moments from the episode and share yours.