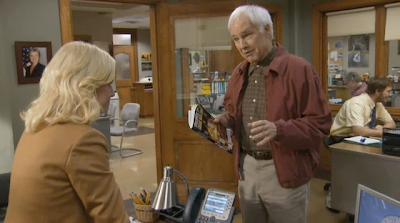 There was once an episode of Parks and Recreation where Leslie Knope listed all of the town’s slogans, and one of them was “Hail Zorp”. She briefly explained that the town had been taken over by a weird cult for a time, and then she moved on. I am so glad they returned to this.

One of the best things about Parks and Rec is the wacky small-town humor that comes with setting the show in Pawnee. So devoting a whole episode to the remnants of this cult and how they keep predicting that the world will end was right in line with that. I felt like all the characters were so well used in this episode, and it was just really, really funny.

I mean, can we talk about the way Ron Swanson annually capitalizes on these lunatics (who call themselves “The Reasonablists” – definitely “weirdly brilliant”, as Ben said) by selling them his hand whittled wooden flutes at insanely high prices? They don’t care that flutes cost $85! The world will be kaput in about four hours! And so Ron rakes it in. Brilliant. I also loved how Chris Traeger earnestly listened to the crazy Zorp leader’s theories about reincarnation, but then was turned off when the conversation shifted to talk of Zorp melting your skin off.

Since you know how much I love me some Ben and Leslie, I was obviously psyched to see the two of them forced into a situation where the sexual tension and awkwardness between them was palpable. Leslie was so jealous when she saw Pawnee reporter Shauna Malwae-Tweep hitting on Ben that she freaked out and did whatever she could to prevent him from going to a party with her. It was bittersweet, because Leslie knew that if the world was ending she’d want to be with Ben. But the world’s not ending, and she wants to run for council. I think the obstacle of Leslie running for office is a really good obstacle to put between her and Ben, but it kind of makes me wish they hadn’t previously introduced the less interesting obstacle of Chris’s no inter-office dating policy.

I also really enjoyed how the potential/unlikely end of the world storyline tied into the two also excellent subplots we got this week. While April and Andy’s story wasn’t directly tied in, checking items off your bucket list is definitely an idea you would get when people are saying the world is going to end. Andy’s bucket list was the best ever. Better than the movie The Bucket List even, which I have seen twice and unabashedly love. Holding $1000? Priceless. OK, comes at a price of $1000, but you know what I mean. And the action movie they filmed with Jerry? I burst out laughing when Andy came crashing through the patio door. Ben is going to be so mad. And I know that I will be adding “Make the best grilled cheese sandwich EVER” to my own bucket list. It will be #1, because I don’t yet have a bucket list. They ended up stealing April’s dad’s car and driving to the Grand Canyon, and I can’t wait to watch the webisodes that detail that trip.

Meanwhile, Tom and Jean Ralphio took their remaining $10,000 from the failed Entertainment 720 endeavor and used it to throw one last, amazing party at the business’s empty location. It actually ended up being an incredibly cool party, though I’m pretty sure it would have cost more than ten grand. There was a tiger.

Things might be looking bad for Tom professionally, but they’re looking good personally. Jean Ralphio invited Tom’s ex Lucy to the party (hilariously because he forgot she’d dated Tom and wanted to hook up with her) and before leaving the party she planted a kiss on Tom. Yay! Something needs to go right in the little guy’s life right now.

What did you guys think of “End Of The World”? Did you love it as much as I did? Are you dying for Ben and Leslie to get back together? And of course, check out my favorite quotes and moments:

Parks and Recreation: Keep On Dancing Til The World Doesn't End
https://haligonia.ca/parks-and-recreation-keep-on-dancing-til-the-world-doesn-t-end-47922/