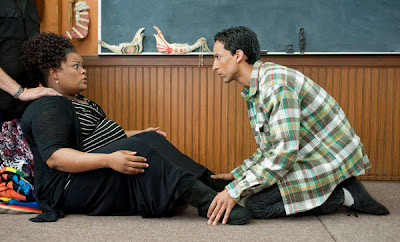 I don’t know about you, but I’m pretty relieved that Shirley’s baby doesn’t have Chang for a father. Shirley delivered her baby in the middle of anthropology class on Community last night, which is about 10 times worse than delivering your baby in Anthropologie. At least then maybe you’d get a free gift card or something.

As the baby was lifted into the air (btw, how gross are babies?) everyone cheered and Andre rejoiced with “And it’s also a black person!”, and Chang revealed that it was probably for the best since all Changs, while very easy to birth, are born with tails.

The episode overall was a delight, with Shirley being forced to deliver the baby at Greendale thanks to a world food festival related race riot, and Britta overcoming her disgust to help deliver the baby. There was so much going on that I didn’t even notice that it was a bottle episode until the very end.

Shirley hasn’t gotten a lot to work with this season, but I thought she really shone in this episode. I hardly ever like Chang, but watching him comfort Shirley with stories about how Changs have thrived despite coming into the world under less than ideal circumstances was pretty funny.

What did you think of the episode? Were you hoping that Chang would be the baby daddy?

Best exchange of the episode, and possibly ever:

Jeff: “Look, backseat birther. Shirley’s on her third kid. She doesn’t need a thirty-year old slacker with two one-eyed cats governing her body.”
Britta: “First of all, together my cats can do anything. Secondly, you disqualified yourself from this conversation the moment you decided to grow a wang.”
Jeff: “I regret nothing.”
Britta: “I feel sorry for the airhead you’re gonna knock up at the age of 70. You’re gonna be sitting in the waiting room playing solitaire on your BlackBerry while a life is created ten feet from you.” (Meanwhile, Shirley’s water breaks)
Jeff: “Oh, and you’re gonna squat in a babbling brook and a beautiful starchild is gonna slide out on a ray of sunshine while your cats each half watch because you’re so natural. “

Other great moments and quotes:

Community: Chang, you are NOT the father!
https://haligonia.ca/community-chang-you-are-not-the-father-37074/