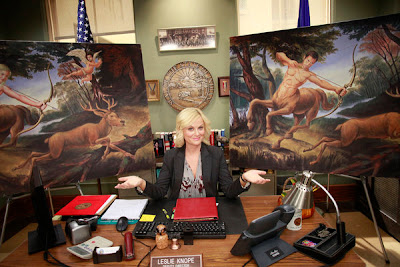 You know what the second-best thing about Steve Carell’s final episode of The Office was? (The first being, obviously, Steve Carell’s awesomeness.) An extra long episode of Parks and Recreation! OK in actuality, it wasn’t that much longer than a regular episode. Maybe five minutes, plus more commercials. But considering how freakin’ funny “Jerry’s Painting” was, I’ll take whatever I can get!

Jerry produced a painting of a centaur for a publicly funded art show, and the centaur looked exactly like Leslie. Topless. Which made Leslie feel great, since she was feeling a little powerless over the rule preventing her from dating Ben, and the centaur was powerful and sexy. Plus, the fat baby cherub in the corner had Tom’s face. Comedy gold!

Honestly, I don’t think I’ve ever laughed as hard as I did within the first ten minutes of the episode. It was the perfect follow up to Michael Scott’s bittersweet goodbye.

Things got ugly when Marsha, the uptight Pawnee soccer mom, deemed the painting offensive, and Chris looked at the whole matter as yet another example of Leslie’s insubordination. I wonder when he’ll let her “affair” with Tom go? Maybe once she starts sleeping with Ben? I love that Chris, who seems like a boss Leslie would get along smashingly with, has become something of a nemesis.

The subplot this week was equally funny. Ben moved in with April and Andy since the motel he’d been staying at for seven months was hit with a bed bug infestation. Though after getting a glimpse of April and Andy’s empty, filthy apartment, that almost seemed more appealing. Ben tried to teach our favorite newlyweds how to be adults, but it wasn’t an easy lesson. Mostly because Andy is clueless, despite being about 28, and April thinks adults are boring. You know, with their stupid cutlery and stuff. It was really sweet when Andy told April that they could still be adults and buy stuff like forks, and still be fun and cool – by also purchasing a marshmallow gun, clearly the coolest item among the piles of “As Seen On TV” junk they’d piled into their cart at Bed Bath & Beyond.

I can’t say this was the funniest episode of the season, because I feel like I say that about every single Parks & Rec episode. But they are all so funny! Here is a giant list of everything I loved: