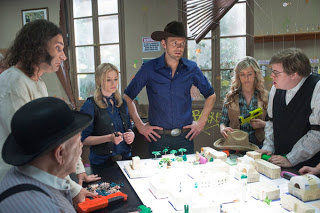 What a season finale, right? Community’s two-part paintball extravaganza was epic, and while I do think I preferred last week’s Western themed episode, this Star Wars tribute was almost as awesome.

We picked up where we left off – the school was under attack by a giant ice cream cone. Yes, you read that right. It turned out that the whole paintball tournament had been an evil plan executed by the dean of City College, in an attempt to get the Greendale students to destroy their own school.

That meant everyone at Greendale had to band together to defeat them and win that $100,000 prize money to help pay for the damages.

Now, I don’t know much about Star Wars having never seen any of the movies, but I did love how Abed immediately claimed the role of Han Solo before Jeff could, and it was pretty crazy to see him making out with Annie just because he was in character. 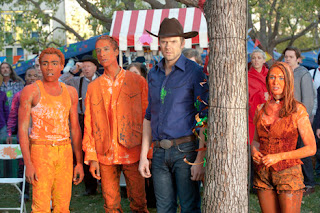 I loved how Troy tried to step up as leader rather than Jeff, and they both ended up executing failed plans. Troy’s brilliant plan to lure the enemy into the library and then turn on a sprinkler system filled with paint was foiled by a fat kid getting stuck in the escape route, and Jeff’s plan to storm the ice cream truck was just bad. It felt like everyone played an important part in this episode, and it was good to see Jeff be the first to get taken out.

I loved the double-psych, too. It looked like Shirley had won after she and Britta epically took everyone out in a golf cart, but they missed a couple City College players and got shot. There was another twist, though – Pierce had successfully faked another heart attack, dressed up as the competition so he could take them out, and won the whole thing.

I’m not sure that these episodes redeemed Pierce, but I do think they were the first to do him justice in a long time. His two faked heart attacks showed how he was willing to do anything to win, but they also helped keep things light – after all, it’s only paintball. No one will ignore a potentially dying man to win it. Pierce took advantage of that – twice.

Pierce won the money and donated it to the school, and everyone decided to let him stay in the study group. He says he’s done with them, though, and can you blame him? He’s been a jerk all year and deserved to be kicked out of the group, but being a part of the group is also quite the emotional rollercoaster. You’re in, you’re out, they love each other, they hate each other. It’s dramatic. I also really liked the extra bit of character background, that Pierce has been attending the school for twelve years. It helped humanize him. 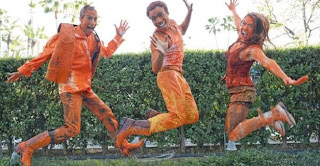 I’m glad the show ended the season on this cilffhanger, rather than another romantic one. I’m honestly not sure if Pierce will return to the study group next season or not – but I feel pretty confident that Community will make it funny either way.

What did you think of the episode? Did you like it more or less than Part One? And as always, here are my favourite quotes and moments from the episode: