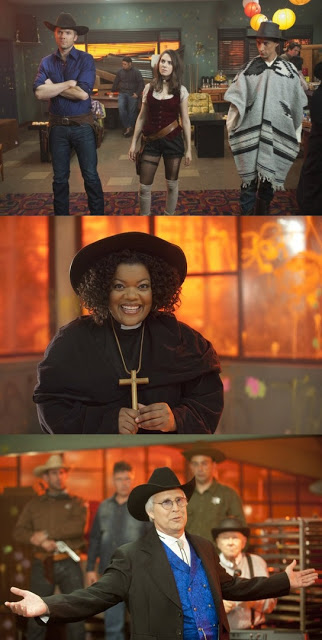 How amazing was that? I wasn’t sure Community could top the epic paintball war of last season, but after watching the old Western style paintball episode on Thursday night, I’m pretty sure they did it.

I whine a lot about how Annie hasn’t gotten enough material or screen time lately, so it was nice to see her take the lead in the episode. Alison Brie is such a diverse actress, pulling off roles on Community and Mad Men and it was awesome to see her show off more skills. Who would have thought she could make such a great Lara Croft type? I want her to win the whole thing.

The half hour flew by, because it was packed with lots of action, jokes, and great interactions within the gang. I loved that within the paintball game the writers managed to address Pierce’s unlikable nature this season.

For the second part, next week, the genre switches gears from Western to alien invasion. I can’t wait to see where they go with this. Now, check out these highlights – there were so many!