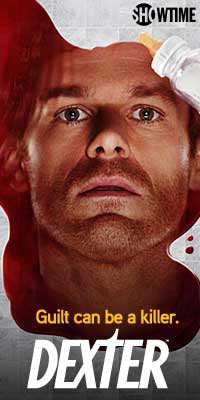 I know this is wrong, but I kind of hate Astor. I know, it’s not fair. She’s a kid. She’s been through a recent trauma. She’s fictional. But she’s always been a little snot, and she did not handle this whole “Mommy bled to death at the hands of a psychotic serial killer” thing very well.
If she was just mean to Dexter, I might not hate her so much. Sure, I’d find her annoying. But the real reason I hate her is that her little brother, Cody, did not want to leave Dexter. He did not want to move to Orlando to live with the grandparents. And her other little brother, Harrison, is staying in Miami. So she should have sucked it up for her little brothers and stayed in Miami. OK. End of rant toward fictional, damaged, pre-teen girl.
Who else loved that second episode of Dexter? I thought it was really well done.
Things were tense for Dexter and the fam since they were all crammed into Deb’s tiny apartment. Deb had some great moments this week – I especially liked when she vented to Quinn about how exhausting it is to be the supportive sister. Deb’s doing so well, but it’s not easy. And it didn’t help that Astor was being a twerp about the whole thing, from the close quarters to the selection of clothing Dexter brought her from the house. Oh right. I wasn’t going to rant anymore. It’s just that Cody is so freakin’ cute in comparison! 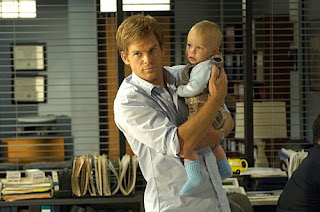 Dexter used a great “put your own oxygen mask on first” analogy to justify hunting down a guy who’d killed a woman in the moving van that Dexter rented. He did a bad job of cleaning up, Dexter’s curiosity was peaked, and he needed the catharsis. It was a little distressing to see Dexter lug Harrison with him to examine the blood in the moving van in the middle of the night. I mean, at some point singing lullabies about murder to the baby could become psychologically damaging. You know. If sitting in a pool of his mother’s blood didn’t already screw him up.
Dex finally went to his FBI interview, and the suspicions of most viewers and blog commenters were confirmed – rather than getting pinned for Rita’s murder, the feds are looking into Kyle Butler, aka Dexter. Quinn’s already piecing together the sketches the family did, so it’s only a matter of time before they realize there’s a connection between Dexter Morgan and Arthur Miller. Trinity might be dead, but he’s not gone.
Meanwhile, Maria and Angel had a stupid fight over money, and Deb admitted that she slept with Quinn. I’m still keeping an open mind about the Deb/Quinn thing, but the Angel/Maria storyline felt like a waste of time compared to the main plot. Maybe the fact that Angel pummeled the crap out of a guy in a bar to defend Mariaa’s honor will spice things up. I did like the stuff about Masuka hating blood spatter work though, and I liked the new cop that helped out on a grotesque gang-related beheading.
We’ve got a couple good questions hanging in the air now – how will Dexter manage to kill the creepy road kill guy? Will Quinn or the feds make the connection between Dexter and Kyle Butler? And how will Quinn’s feelings about Deb complicate that? And what will become of Dexter with Astor and Cody gone?
(Dexter, S05E02, Aired 10/03/10)