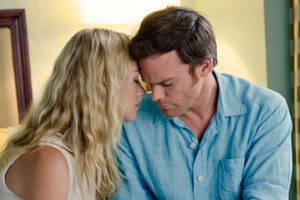 Hannah and Dexter in the final season of the show.

I don’t know why I kept watching Dexter, season after season, not enjoying it. I hoped it would get better. I couldn’t bail so close to conclusion.

If you’ve seen the series finale, or if you quit the show long ago and want to know how it ended, click through.

For a series finale, most of this episode moved at a snail’s pace. Remember when Dexter used to be so exciting you might puke? This was not like that. I didn’t care if Hannah got caught. I didn’t care if Dexter escaped for a happy ending. I barely cared that Deb died. (Yes, folks who did not watch, Deb died.)

For those of you who did not watch the past several seasons:

Basically, Dexter went after this season’s lame-o “Big Bad” while his fellow murderer and girlfriend Hannah tried to escape to Argentina with Dexter’s son. The Big Bad, a stiff and uninteresting man named Saxon, had shot Deb. Deb survived for a while, had a blood clot that caused a stroke, and ended up on life support.

Dexter, despite not-really-anymore working for Miami Metro, went to give Saxon a forensic test. He baited Saxon into stabbing him in the shoulder with a pen, and swiftly grabbed the pen and stabbed Saxon in the neck with it, killing him. He then calmly hit a panic button and tried to claim self-defense.

Dexter took Deb off life support, tossed her in the ocean, and then decided that he ruins the lives of everyone good around him. It looked like he was killing himself, by driving his boat into a hurricane, but he was just faking his own death. We last see Dexter with a ginger beard, working in manual labor. No one ever finds out that he’s the Bay Harbor Butcher, his son lives happily ever after with a pretty blond murderer in Buenos Aires. The End.

I said before that I thought Deb dying would be good for the show, because Dexter would be facing consequences for his actions. I was wrong. Dexter pulling up to a hospital by boat, walking in, taking his sister off life support and carrying her, draped in sheets, back to his boat, was one of the most ridiculous things I’ve ever seen. Almost as ridiculous as Dexter surviving the storm, while his boat does not.

I can’t believe how much of this past season was wasted, pointless material. Aren’t you so glad that Deb and Quinn reconciled before she died? Yeah that was super useful. All so that Quinn could glumly back up Dexter’s claim of self-defense, and lament that he wishes he could have killed Saxon himself. So glad we went through the whole relationship with Quinn and Jamie to get to this point.

And hey, aren’t you so glad that we met Masuka’s long-lost daughter before the series finished? There’s a storyline that really went places.

I don’t know about you guys, but I was so glad when Harrison whispered to Dexter that he loves Hannah. Of all things, I was most concerned with whether Harrison would end up with a mother. I’m so glad the show really took the time to build that relationship, allow us to get to know Hannah, and create some actual stakes so that we cared whether Hannah escaped the country…oh wait. They didn’t do any of that.

The problem with Dexter is that the writers always put too much emphasis on the “hero” part of anti-hero. Dexter was too easily let off the hook for breaking his code, or given outs in situations where, realistically, he would have broken the code – like Lyla killing Doakes for him, and Deb killing LaGuerta. Dexter knows he ruined Deb’s life, but Deb’s last words were to absolve him of that. To wish him happiness and tell him nothing will ever be his fault. It’s the opposite of Breaking Bad, and it’s much less effective. Overall, I’m very disappointed with the direction Dexter took for the last half of its series run, and this last season in particular.