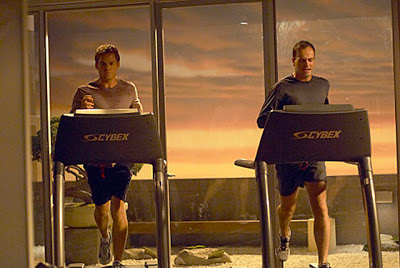 Well, that was a good episode.
I know there are probably still people out there who say this season of Dexter isn’t measuring up. But guess what? It totally is. Do not measure every episode against last season’s spectacular finale. That is ridiculous. Measure it against past seasons, and past characters. I think Lumen is a more interesting and complex character than Lyla and Miguel combined. I think she is even, in some ways, more interesting than Rita because she knows Dexter’s secret. She’s closer to him now than anyone else has been before.
Jordan Chase is not the most intriguing villain we’ve ever seen, but he’s certainly still capturing my attention – especially in this most recent episode. And I’m really starting to like where this Liddy storyline is going. I was worried that Quinn was going to become Doakes 2.0, but Liddy has taken all this in an entirely new direction. I’m even caught up in the politics of Miami Metro now. Will Deb’s career suffer? Will LaGuerta get fired? Or Batista?
This week, Dexter used private counseling sessions with Jordan Chase as a cover to steal a blood sample from a vial of blood he wears around his neck. (Weird fact: The actor, Jonny Lee Miller used to be married to Angelina Jolie, who used to wear Billy Bob Thornton’s blood in a vial around her neck.) But Dexter had a lot on his mind – like a surprise visit from his drunk, scantily clad preteen stepdaughter – and he messed up. He got the blood (it mysteriously belonged to a girl who’s still alive) but left evidence of the operation. Now Jordan Chase knows Dexter’s true intentions.
I’m glad Astor showed up this episode. I’d felt a little bit like her and Cody’s storyline had been dropped. I mean, did Dexter ever call them? Did anyone make plans for them to visit their brother? This episode we learned what’s been going on with Astor since she moved to Orlando (nothing good) and we got some major development in the Dexter department. Astor was drunk, belligerent, and dressed like Deb when Deb worked as an undercover prostitute. She showed up to the old house with a friend, scared the crap out of Lumen and then caused some major problems for Dexter.
Obviously, she assumed Lumen was Dexter’s new girlfriend. I felt bad for Dexter and for Astor, since Lumen is not his girlfriend but is also more than a tenant. Astor could tell he was lying, but he couldn’t actually tell her the truth. (She’s not my girlfriend, we just kill people together!) It didn’t help that when Dex brought Harrison over he seemingly called Lumen “mama” – though it turned out that he was referring to his toy.
Meanwhile, Quinn dropped the L bomb on Deb. Oh Deb. Quinn has grown on me, I’m ready for her to embrace him. Will she? Nothing ever ends well for her, and this seems to be going the usual route. As Deb pondered whether she should return the “I love you” she found out that Quinn had been suspended from work for investigating Rita’s murder…by way of trying to prove that Dexter was Kyle Butler. Deb was mad, but he eventually made things right. With her, anyway. Liddy is furious. He now thinks that Dexter and Lumen were dumping either drugs (wrong) or bodies (ding!) into the ocean, and he’s investigating that with or without Quinn. So now Quinn has a dangerous, psychotic enemy. Hopefully Dexter off’s Liddy before anything terrible happens.
Speaking of terrible, thanks to Deb’s temporary gig in the file room (while she awaits the hearing on her suspension) she noticed that DNA reports showed that multiple people had been involved in the Boyd case. After some serious pushing from Batista and Deb, LaGuerta decided to reopen the case. They know Chase’s bodyguard is involved, and they know Dexter has been getting therapy from Chase…this is dangerous.
The reason they know Dexter has been getting therapy from Jordan Chase? Because Astor and her friend mysteriously went missing while Lumen was out buying Advil. It looked like one of Chase’s henchmen, so Dex had to inform the police, which meant telling them where he’d been. It also meant that Deb found out about his “tenant” Lumen. It turned out the girls had been running away from Astor’s friend’s stepfather, and then it turned out that he was the whole reason they came to Miami in the first place. He’d been beating the young girl in places no one could see (Lumen spotted the bruises on the girl’s stomach when she took off her sweater.) Dexter beat the crap out of the guy and sent him packing. I know violence is bad, but I can’t be the only one (besides Harry’s ghost) who thought that was kind of awesome. Then Dexter took the girls back to Orlando and finally made a connection with Astor. I don’t want to see Astor and Cody move back in with Dex, but hopefully this new bond will open the door for the kids to visit occasionally.
The episode ended on a very chilling note. Jordan Chase called Dexter’s house and left an ominous message with Lumen…and he knew who he was speaking to. Things are getting good!