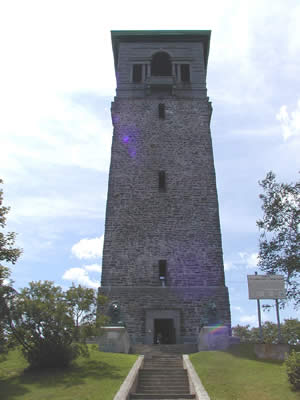 Visitors to the Sir Sandford Fleming Park can once again enjoy the century-old Dingle Tower.  Repairs are now complete.  The site is again open to the public daily from 8 a.m. to dusk until mid-November.

The official spring opening was slightly delayed due to the need for necessary repairs on one of the stair landings of the historic tower and some limited masonry work in its walls.

“The Dingle is a tremendous, accessible landmark.   I am pleased HRM is maintaining this piece of local history for all to enjoy,” said District 17 Councillor Linda Mosher.

To commemorate the 150th anniversary of representative government in Nova Scotia, Sir Sandford Fleming donated his former summer retreat to the City of Halifax for a public park.  Known as the “Dingle”, the park included 95 acres of land.   The tower was added as a centrepiece of the park and celebrations.  Its cornerstone was laid October 2, 1908 to correspond with the 150th anniversary of the meeting of the first Nova Scotia Assembly on October 2, 1758.