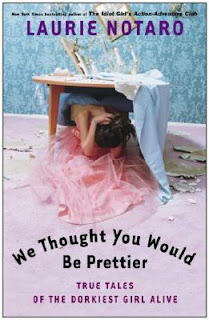 Titles seem to get a fair bit of attention here at the reader: Maureen recently wrote a post about the Bookseller/Diagram Prize for the Oddest Title of the Year, a prize which (as the name pretty much tells you) honours the truly odd in book titling. And back in the early days of this blog, I did a post about books being released in different countries with different titles. I’ll admit to being the sort of person who judges a book by its cover – particularly its title. A well crafted title can really grab me, where as a poor one can put me off of even the most interesting book.

It’s hard for me to pin down exactly what appeals to me in titles. Certainly humour helps. A book that jumped off the shelf at me recently is Horsemen of the Esophagus: competitive eating and the big fat American dream. I like a nice play on words in my titles. Food books seem to be embracing the play on words in their titling of late: The United States of Arugula: how we became a gourmet nation definitely first caught my eye because of it’s play on words, as did Love in the Time of Cholesterol: a memoir with recipes.

Nonfiction titles usually have long subtitles to give you a clue about the book beyond the quirky main title, but fiction titles can be a little harder to figure out. A Short History of Tractors in Ukrainian sounds more like a textbook than a novel, as does a favourite book of mine Special Topics in Calamity Physics. Just so there wasn’t any confusion (and maybe any lawsuits?) Stephen Clarke added the helpful subtitle “a novel” to his debut An Arsonist’s Guide to Writers’ Homes in New England.

I admire authors that take chances with their fiction titles. I can tell you from experience that people have a hard time remembering convoluted book titles, as I’ve seen a hundred times with people looking for books like Extremely Loud and Incredibly Close and The Curious Incident of the Dog in Night Time: but I love it when you finish reading a book and you understand why the convoluted title was perfect for it.

Simplicity in a book title can work for me as well, though. Why Things Break: understanding the world by the way it comes apart struck me when I first came across it as a book that would be interesting and straightforward. Candour doesn’t hurt either: I’m sure that Your Call Is Important to Us: the truth about bullshit owes a certain percentage of its popularity from its title. Sometimes a title doesn’t hit the mark for me though, for example, Fish That Fake Orgasms and Other Zoological Curiosities just seems to be trying to hard.

Memoirs can be a great place for interesting titles, particularly comic ones: We Thought You Would be Prettier by Laurie Notaro, When You are Engulfed in Flames by David Sedaris or Never Have Your Dog Stuffed by Alan Alda are all good examples. Looking back, I have to wonder how much Dave Eggers should take credit and/or blame for this kind of convoluted titling: as I suspect the runaway success of his 2000 memoir A Heartbreaking Work of Staggering Genius made awkward titles seem commercially viable.