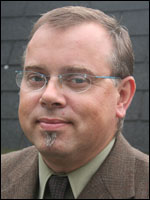 Dr. Thomas Trappenberg is the nominated candidate for the Green Party of Canada in the riding of Halifax West.

Thomas is professor at Dalhousie University and has lived in Halifax West since 1995. He holds a PhD in particle physics and has held research positions in Canada, Japan, and Oxford, England. He has also worked with local industries. Thomas and his wife have two children who attend local elementary schools.

Thomas believes that Halifax West has many opportunities within the Green movement. It is a unique semi-urban centre, combining distinct communities like Bedford, Clayton Park, Tantallon, Timberlea and the Prospect road area, from Pockwock Lake to Shad Bay. Within this community remain unique wilderness areas that must be preserved against polluting industries while still enhancing public services like public transportation, community centres and sports facilities.

While preserving our local natural treasures, at the same time we must strive to strengthen business and employment opportunities in this area. The green movement has already been strengthened in many countries with similar environments in northern Europe – there is no reason why Halifax West could not be a leader in the 21 Century if we put our heart into it.

Thomas has a long history with the Green Party, witnessing the rise of the movements in Germany in the early eighties, serving as inaugural president of two electoral district associations (Halifax and Halifax West), representing Nova Scotia on council in 2007, and co-organizing the foundation of the Green Party of Nova Scotia. Thomas gained experience as the Candidate in Halifax West in the 2006 election.

Thomas Trappenberg is the nominated candidate for the Green Party of Canada in the riding of Halifax West.