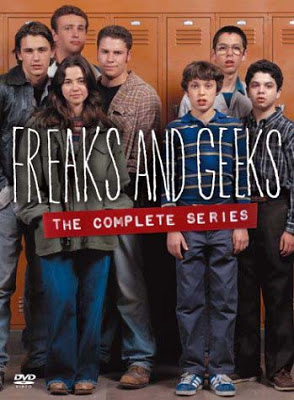 Freaks and Geeks is a special show. The fact that it only aired for one season (A mere 18 episodes on NBC, way back in 1999) is a crime against humanity. The show has so much going for it. It’s smart and funny. It’s emotional without being cheesy. The characters are fantastic and it involved a group of seriously talented, cool individuals.

Let’s talk for a minute about who was involved. Ever heard of a guy named Judd Apatow? The guys behind such smash hits as Anchorman, The 40-Year-Old Virgin, Knocked Up, Superbad, Forgetting Sarah Marshall…the list of hilarious projects that he’s either produced, written or directed goes on and on. He was the executive producer of Freaks and Geeks and continues to work with some of the great actors who worked on Freaks and Geeks.

There were the “freaks”: The show’s star, Lindsay Weir, was played by Linda Cardellini who went on to play one of my favorite characters on a little show called ER. Her friends were played by James Franco (known for Spider-Man, Pineapple Express, Eat Pray Love, and for being incredibly interesting), Jason Segel (known for How I Met Your Mother, Forgetting Sarah Marshall, and hopefully for bringing back The Muppets), Seth Rogen (known for The 40-Year-Old Virgin, Knocked Up, and pretty much anything else Judd Apatow does) and Busy Phillips (also known for ER, and now hilarious on Cougar Town). 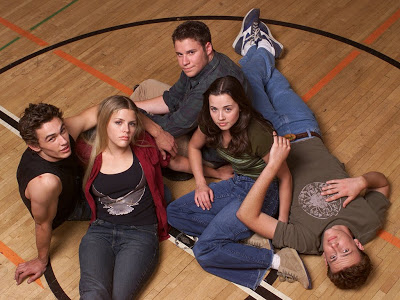 There were the “geeks”: Lindsay’s brother Sam was played by John Francis Daley, who now appears on Bones. His friends were played by Samm Levine (who I’ve seen in I Love You Beth Cooper, Inglourious Basterds, and many TV guest spots) and Martin Starr (who’s been in Party Down, Knocked Up and Adventureland). 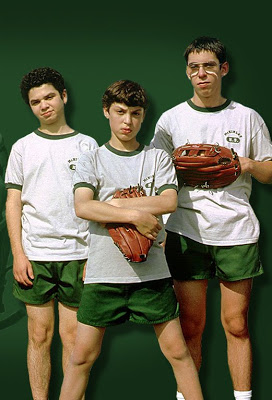 You can also spot Judd Apatow’s wife, the very funny Leslie Mann, as a teacher in a few episodes, as well as Dave “Gruber” Allen as a guidance counselor – he was the town troubadour on Gilmore Girls and is known for the TV show Higgins Boys and Gruber.

The show centers around the Weir family. Lindsay and her younger brother Sam are both attending high school in 1980. The focus of the show is on Lindsay’s recent transition from being a nerdy, brainiac mathlete with nerdy, brainiac, mathlete friends to hanging out with the “freaks” – pot-smoking slackers. But despite the stress and confusion this causes her conservative parents, Lindsay is never overly rebellious or troubled. She’s just trying to find herself.

Lindsay’s younger brother Sam is a classic nerd with even nerdier friends. They’ve entered their freshman year and watching them try to navigate the social hierarchy of high school without turning their backs on things they enjoy, like Star Wars, rockets and Dungeons & Dragons, is hilarious.

Overall, the show strikes the perfect balance of heart and humor. There are some very memorable comedic moments – Lindsay’s party guests getting “drunk” off non-alcoholic beer, Sam’s ongoing crush on a cute cheerleader, Lindsay’s ill-fated experimentation with marijuana, and Sam wearing a powder blue disco jumpsuit to school immediately come to mind. But there are also some complex emotional storylines that could have made this show a great series, if only it had been given the chance. In particular, the episodes where we dive deeper into the home lives of Lindsay’s “freak” friends are what sets this show apart from other, as it exposed how they ended up on the fringes of high school society.

Ultimately, Freaks and Geeks is a show about high school kids trying to figure out who they are in early 1980s America. But the show does it better than anyone else. With only one season, Freaks and Geeks grabs you. It captures your imagination and your heart. The nature of the show – nothing gets tied up with a bow, because producers and writers hoped the show would get renewed for a second season – means when it ends, you wonder what happened to the characters. But still, years later, I find myself wondering what happened to those crazy kids. What happened the following years, as they finished up high school? Where would they be now, ten years later? These questions, and the way the show has gained fans over time, are a testament to how amazing Freaks and Geeks truly is.