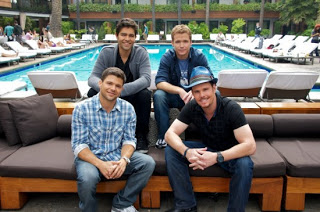 OK, OK, I’m starting to get into this season of Entourage…and it’s almost over.

Since there are only eight episodes in this final season, that means we’ve passed the halfway mark. Just as I was getting interested!

I was on vacation last week and didn’t review “Whiz Kid”, but I did do a fashion review over on You Know You Love Fashion. You should go check it out. I titled it “Urine Trouble” and then giggled like Anderson Cooper.

I thought “Whiz Kid” was a pretty good episode, mainly because the guys’ hijinks in getting Vince clean urine for a drug test (the aftermath of that ugly suicide he witnessed) were pretty funny. Also, Ari’s storyline has been getting really good.

Sunday night’s episode (which I won’t name, in an attempt to keep the blog somewhat family friendly) was the first episode I’ve really enjoyed in a while. Ari’s stuff was great. Watching him unravel as he loses Mrs. Ari has been fresh material for him, but we haven’t completely lost the character we’ve always known. And honestly, I like him and Dana together. I’m kind of disappointed that we’ve only got three more episodes to see where this goes.

While I’m not a big Andrew Dice Clay fan, I also like what’s been going on with Drama. He’s really putting his neck out in order to make his show good, and I think that’s an interesting step for him. Meanwhile, I’m kind of happy that Turtle’s taken something of a backseat. I didn’t love the tequila storyline he had going on for far too long, but his idea to bring a classic New York Italian restaurant out to L.A. seems much more plausible. We still know he has ambitions, but his storyline isn’t grinding the episode to a screeching halt like I felt it was before.

I think this week was the first time I really enjoyed Vince and E again, as well. E seemed more back to his normal self as he screwed up and slept with Melinda Clarke, Sloane’s ex-stepmother (and ex-wife of his ex-boss…so many exes!). E was too uptight for too long, and it was nice to see him actually make a mistake again.

Vince’s storyline this week centered around a Vanity Fair story Shauna had set up. He bombed the first interview with the hot journalist writing the piece by relentlessly flirting with her and evading all the deep questions. The second interview went better, until he asked her out for a drink afterwards and she again declined. Oh, Vinnie. The kid never learns. I’m interested to see what’ll actually end up in the magazine about Vince, and if he’ll actually end up with the journalist he’s so infatuated with.

What did you think of the last couple episodes? Are you disappointed with how this season has gone, or do you think it’s picking up steam in time for the finale?