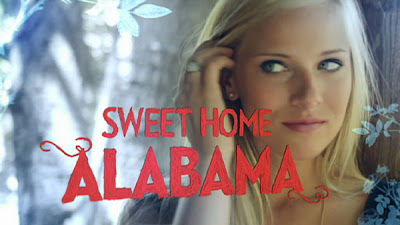 You guys. I am in love with a new show.

Sweet Home Alabama is a Bachelorette-style dating show airing on CMT (US only, but you can watch it online!) with a twist – it’s set in Alabama and a beautiful Southern belle must choose among a group of country boys and city slickers.

Six episodes have already aired (you’ll catch up in no time, I promise) and the series is nearing its end – and I’ve found it absolutely delightful.

There are several key differences that set Sweet Home Alabama apart from The Bachelorette, so don’t be fooled by what sounds to be the same music and voice-over guy.

The guys are vying for the affections of Devin Grissom, a beautiful blonde college student. Yep, she’s only about 20 years old – but you know what? I actually like what the young ages of the contestants has done for the show. I haven’t heard the word “marriage” mentioned once and, let’s face it, marriage hardly ever comes out of these reality dating shows. Instead, it’s about just that – dating. Devin is looking for a boyfriend, and she has two great groups of guys to choose from. I also really like Devin. She seems like a sweet, fun girl with a good head on her shoulders. She’s been surprisingly mature through this whole process, much more so than some of the women I’ve seen on The Bachelor(ette). 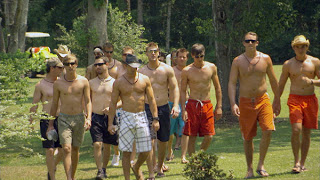 One weird thing that has developed over the course of the show is an intense rivalry between the country boys and city guys. I knew there’d be some clashes, but the us vs. them mentality on both sides is really something else. Personally, I’d like to see Devin choose a country boy, if only for the fact that I don’t think she should move across the country for a guy she only just met – we’ve seen how that works out for contestants on other reality TV dating shows.

On the most recent episode, Devin introduced the five remaining guys to her dad. And it was hilarious. Her dad was a typical protective Southern father, but he wasn’t some redneck cliche. He seemed like a down to earth guy who wants the best for his little girl and knows that a reality television show probably isn’t it. He actually described the experience as “a father’s worst nightmare” and said he knew it was highly unlikely that Devin could find love in such a short amount of time. When he met the group of guys he immediately told them that “Y’all are gonna have to go a long way to impress me,” and better yet he said “I can use the Internet just like anyone else.” Yes, he actually asked every guy there “If I Googled you, what would I find?” And better yet, he actually did Google them! He dug up some unsavory information on one of his daughter’s suitors and she sent him packing. It was incredible.

I won’t tell you which loser had the racy past in case you want to watch the show (if you’re into this kind of thing, you should really check it out) but I will tell you, his reaction to being eliminated was hilarious. The guy did a softcore porn show and couldn’t believe that Devin had a problem with it. “That bothers you?” he asked, like an idiot. “I’ve never met anyone that bothers.” For reals, guy? The show was called Hotel Erotica! As he departed, the guy mumbled “I definitely should have told Devin’s dad that I did a movie that had softcore porn…it was very tasteful and romantic…I had a lot of lines.” Oh, you had a lot of lines? Well then! Yeah, you’re still getting the boot. Gross.

So have any of you guys been watching the show? Who are you rooting for? And if you’re interested, watch the episodes and come back to tell me what you think!