I never in a million years would ever have anticipated what a wonderful 30th birthday I was going to have.  Given my wonderful husband and wonderful friends, I shouldn’t be surprised! My birthday was on Thursday, but the "real" celebration was yesterday.

The Cover Up Story

We worked on Thursday before the long weekend and I was told that we wouldn’t "officially" celebrate until Friday with my cake because Amy and Robert had shift conflicts and we would all be off on Friday.  Amy and Robert are good friends of ours and we share all of our holidays together like a family.  But the husband told me that after work on Thursday we had to go over to his mother’s house so that he could take measurements of her deck because he was making her a lattice enclosure and needed to buy the materials that night so that he could work on them on the holiday Good Friday during the day.  After doing that, we would go out for supper wherever I wanted since it was technically my birthday even though we wouldn’t have cake and such until the next day. Okay good enough I thought.  It was a long day of work after all.

So we did that and it ended up a late, but delicious Chinese food in Lower Sackville.  I hit the sack as soon as I got home because I was a tired Mamma.

I spent the next morning catching up on blogs, had breakfast, took a nap and then took Lucy for a walk.  Hubby was hard at work trying to get this lattice project prepared for his mother because he tells me that Amy and Robert are going to come over for a BBQ and birthday cake.  I was like, "but you didn’t pick up anything to BBQ." And he tells me that Amy was taking care of it all.  Okay well that made sense because that is totally something she would do, she’s a wonderful and thoughtful friend!  Okay so far.  He says that we need to go back over to his Moms to see if they were built properly so that he can fix them if there’s a problem over the weekend.  I’m kind of tired and don’t really feel like going for the drive and say, "Can’t I just stay home and rest until the BBQ? Why do I need to go with you to do that?" Then he says that Robert changed his mind and wanted to go to Boston Pizza instead of BBQ so we were going to meet Amy & Robert after he fit the panels.  That totally struck me as odd because Robert NEVER goes out to eat at restaurants and wouldn’t "suggest" it on his own, especially for MY birthday and BBQ is right up his alley.  I ask whether it was even opened on Good Friday and he said Amy was going to call and find out.  I kind of thought something was up because why would Amy prepare for BBQ and then last minute switch to Boston Pizza.  I still went along with it.

I got out of the shower and could hear the husband running the vaccume around the floor which I KNEW was strange and was a suspicious on its own and thought something was up because, let’s face it, the husband does not take it upon himself to randomly start cleaning things.  It’s usually a series of disgruntled wife discussions prompting such an event! He knew that would set me off so a few days prior, he told me that he would be my "slave on Friday" and would clean up the kitchen after breakfast etc.  I thought it was sweet, but I did kind of suspect it was a coverup, but was giving him the benefit of the doubt.

So we went to his Moms, the panels fit perfectly, and I’m fiddling with my Blackberry and perusing Twitter and I see Tasha has just tweeted:

I laugh to myself, thinking that would be a typical Natasha thing to do of course! Maybe my suspicions were just my wild imagination because surely if there was any sort of birthday surprise planned and Tasha was in town, she’d be there. Tricky, tricky Tasha 😀

After the fact I see there were indeed shenanigans going on:

Then Hubby calls Amy to say that we’re on our way and he gets "the news" that Boston Pizza is closed, so it’s "back to Plan A" to go back to the house for BBQ.  Sure enough as we pull up to the house, the driveway is full of cars and there’s balloons on the front step and the strange Robert story and my suspicions were pretty clear.  So I think how sweet it was to pull off a surprise party for me with some great friends.

I get into the house and see the girls and noticed there was Amy and no Robert, Tasha and no Tim etc., and there were no boys.  Then Hubby says, "Okay, I’m out now" and I’m all confused, like why he would be leaving?  I hug my girls and they says there’s someone in the kitchen who wanted to meet me.  I’m thinking, who in the heck could be in the kitchen and I’m almost afraid to look!

I turn around the corner and there’s a chef standing in my kitchen!!!!!  Ahem! THERE’S A CHEF STANDING IN MY KITCHEN with all sorts of gear and supplies and he introduces himself as Chef Chris Burton.  I’m stunned and cannot believe there’s a chef who says he’s going to prepare us a wonderful meal and the theme was of an "iron rich" nature given my iron requirements for the little peanut in there.  I am sooo impressed and had NO IDEA there was anything like THIS being planned for my birthday! It was an intimate dinner just for the girls.  I seriously don’t know what to say. 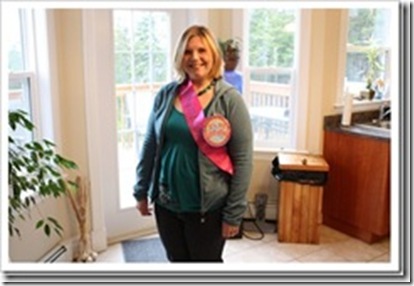 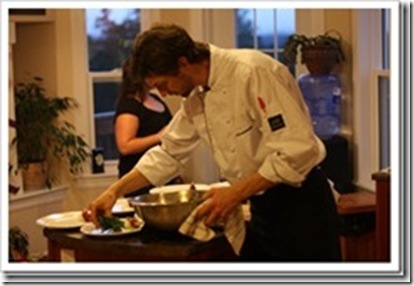 We hung around in the kitchen with him for a bit and he told us a little about his background and his journey from Victoria to Nova Scotia and then I was whisked away to the living room for birthday gifts!  I honestly could not believe there were gifts on top of it all.  I felt a little too spoiled.  My ladies know me well and all of their gifts were so incredibly perfect.  Thank you!!!!

Not to mention I have been immensely enjoying these flowers I received from my bosses (Chandler approved): 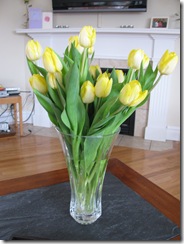 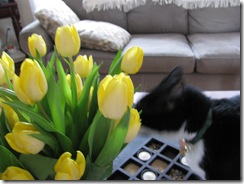 So on to the most delicious meal I think I have ever had, ever… 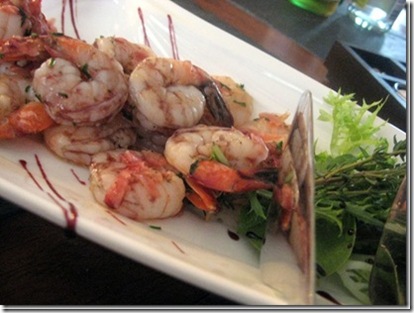 Such an incredible flavour combination and a really nice deviation from the traditional “garlic” shrimp.  So flavourful! 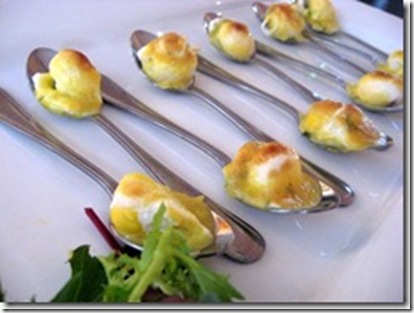 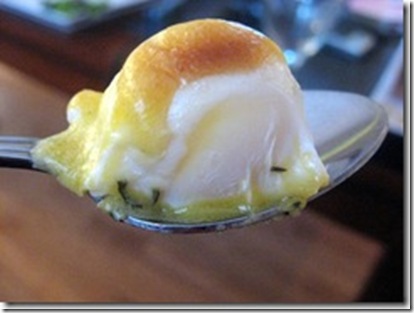 These were so neat! They were like miniature eggs benny on a spoon!

I completely forgot to take a photo of this, so please don’t mind the empty bottles! 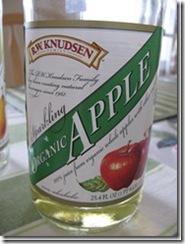 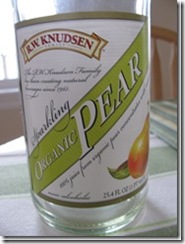 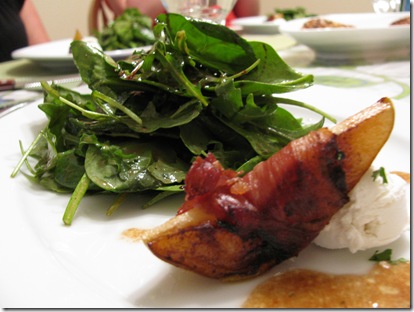 And yummy bread too.  This salad was absolutely incredible!  Loved every single bite!! 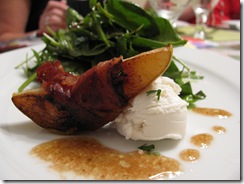 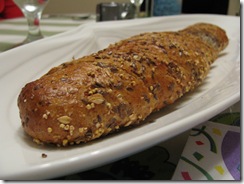 Raspberry & Cassis sorbet with a sprinkle of fresh basil 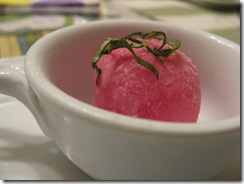 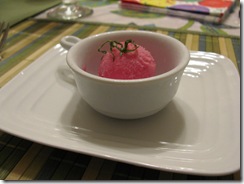 Oh.Emm.Geeeeeee is what this should be called…but fancy food deserves a better description that that! 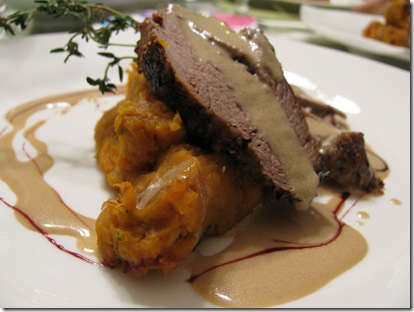 This dish deserved many angles of photos! 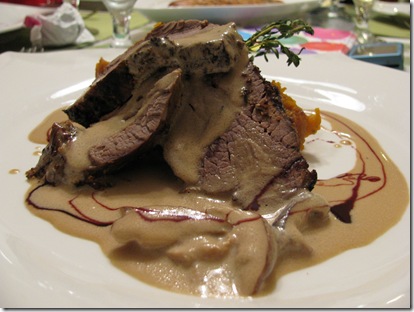 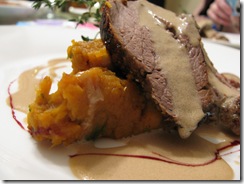 This dish falls near the top of my “best entrees ever” list. I never would have thought to mix a sweet potato mash with chick peas! No to mention there was an Asian inspired reduction in the sweet potato mash as well as the cream sauce served over the beef.  Superb! 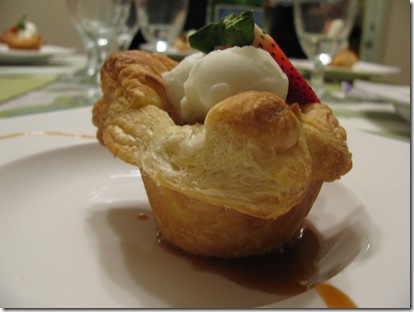 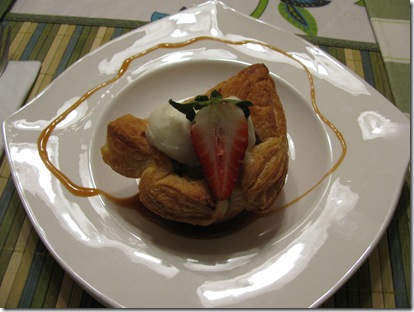 I can’t thank Chef Burton enough for his fabulous food and incredible culinary skills.  It was quite possibly one of the best meals I’ve ever had.  It was all the luxury of a fancy restaurant, but enjoyed in the comfort and ease of your own home with your friends! 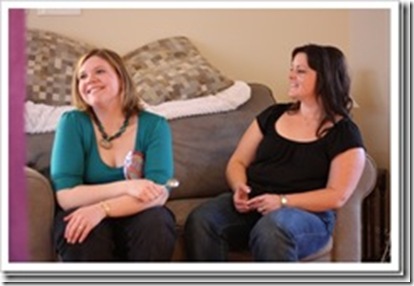 We were all stuffed to the gills and for formalities sake, we of course had to do the "birthday cake" too:

Strawberry shortcake! I had a taste, but that was all I could handle 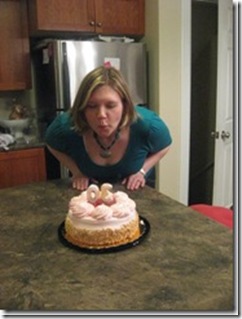 It truly was the perfect way to celebrate my 30th birthday with the little peanut on board.  All of the food was picked local and organic whenever possible and iron rich for the peanut!  What an incredibly thoughtful touch!!

Thanks to my husband and to all of my girls who took the time to celebrate this with me.  Such a unique and memorable night to remember forever: 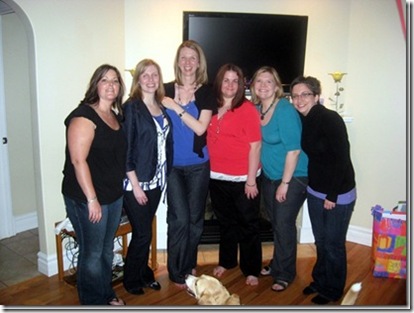 Did I mention that a professional chef CAME TO MY HOUSE and cooked us a gourmet meal???!?!?!