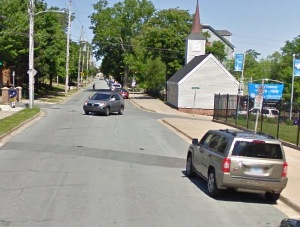 A young girl was hit by a car on Brunswick Street near Gerrish, police recover sawed off shotgun, and a man is arrested after a fight in south end Halifax.


View Larger Map
At 5:20 p.m.  a six year old girl ran out from between two parked cars and was struck by a passing motor vehicle.  The vehicle was driving slowly, and the injuries to the child were not life threatening.  She was taken to the IWK hospital for assessment of her injuries.  At this time it does not appear that there were any infractions under the motor vehicle act.  The investigation into the accident will continue.  There will be no update on the girls condition until tomorrow.

View Larger Map
At 8:30 p.m. Halifax Regional Police Quick Response Unit and East Patrol members arrested a 16 year old  male on Churchill Court in possession of a sawed off shot gun.  He was taken into custody without incident and will appear in court later today to face a number of firearms related charges.

View Larger Map
At 1:16 p.m. Thursday while on routine patrol, an officer observed two men in a physical altercation at the intersection of Inglis and Bland Streets. Witnesses reported that during the dispute the suspect produced a knife but suffered a cut to his hand when a third man intervened and took the knife away from the him. Police were able to locate the knife and arrest the suspect who was found to be in possession of marijuana.

A 36-year-old Halifax man is scheduled to appear in court tomorrow to face charges of drug possession, breach of probation and possession of a weapon.