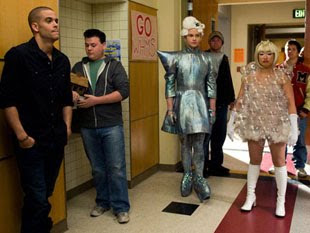 This is Glee at it’s finest. After the epic Madonna tribute a couple weeks ago there was a lot of talk about more artist tribute episodes and I was worried that Tuesday night’s “Glee Gone Gaga” episode would come across as gimmicky. But instead, it was just plain fantastic. It was real and over-the-top, emotionally nuanced and theatrically flamboyant. What I loved was that not all the songs from the episode were Lady Gaga tunes, and instead the show honored the pop queen with the storyline. It was more about the actual kids from New Directions being inspired by Lady Gaga instead of the show paying homage. And it makes sense – these are high school students who are misfits, who are theatrical, who love music. It makes sense that some of them would really love Lady Gaga. And the show portrayed that perfectly, especially with Kurt.
OK, let’s start at the beginning of what was one of the best and most emotional, raw, well-written and well-acted episodes of the season.
It’s so magical, we’d be so fantastical

Principal Figgins called Tina into his office to discuss her perfect attendance record. No, that’s just what Mr. Schue thought it was going to be about. Figgins actually wanted to tell her to stop dressing goth (not even – Tina is just baby goth) because he was afraid of both vampires and Twi-hards. I loved the group of crazy Robert Pattinson fans dressed as vampires almost as much as I loved the fact that Figgins truly believes in vampires. Poor Tina, she wasn’t even trying to copy Twilight. She said she wasn’t even allowed to watch the movies because “My mom says Kristen Stewart seems like a bitch.”

Tina had to come to school dressed in a drab grey hoodie and was on the market for a new look when Rachel came into glee club rehearsal and revealed that their competition, Vocal Adrenaline, was preparing a Lady Gaga tribute. And thus Mr. Schuester came up with the week’s lesson: Gaga! It would teach the kids a bit of theatricality and help Tina find a Figgins-approved look.

For a little…er, background research, Rachel, Quinn and Mercedes snuck into Vocal Adrenaline’s rehearsal to watch Shelby bark orders as the kids pranced around in head-to-toe red lace. When Shelby taught the kids a lesson in theatricality by wowing them with a solo rendition of “Funny Girl” Rachel recognized the voice and realized that Shelby was her mom. It was an emotional scene, but it was only the beginning of the rollercoaster of emotions we experienced this episode.

Rachel told Shelby she was her daughter, and I was surprised at Shelby’s cold reaction. After all, she sought Rachel out. Then Rachel finally figures out that Shelby is her mother and they…sit in separate rows of the theater? Shelby seemed to panic and left Rachel feeling worse-off than before.

Everyone showed up to glee club in Gaga outfits – and by everyone I mean Kurt and the girls – and then Rachel showed up for rehearsal in an awful outfit with stuffed animals stapled on. I love how everyone else had amazing, professional costumes and then Rachel showed up in something that looked like what one would actually wear in real life as a Lady Gaga costume. But in the context of the show, it was pitiful. “You look terrible. I look awesome,” Brittany noted. And they did all look awesome. 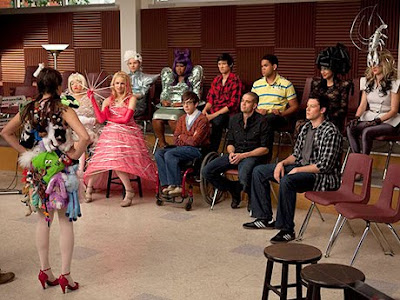 Amid all the wackiness, though, were some painfully real moments. When Kurt and Tina strode the McKinley High halls in their respective space-tin-man and bubble dress outfits, they got seriously picked on by some Gaga-hating (is there such a thing?) football players. They pushed them around a called Kurt a “homo”, which is pretty new territory for television shows. Maybe I’m not watching the right shows, but I don’t see a lot of material out there that tackles homophobia so bravely. I loved how Kurt stood up to them.

Kurt and the girls performed “Bad Romance”, a song I was really excited to hear Glee-ified. For me, the performance surpassed my expectations. It was a fantastic group performance, and I loved how heavily Kurt and Santana were featured because the song really suited them.
Rachel sought help from Shelby with her Gaga costume, and the result was a totally awesome geometric dress. She returned to New Directions rehearsal just in time to see the boys (sans Kurt) perform their answer to Gaga theatricality – a Kiss song. I’m not super familiar with Kiss and didn’t know “Shout It Out Loud”, so part of the appeal was lost on me. It worked as a device to shed some light on the crap Finn had to take from his football buddies – having a couple jocks catch you washing off your make-up is pretty much every high school dude’s nightmare.

I found it kind of hard to believe that Finn’s mom would spring the news that they were moving in with Kurt and his dad on him actually in front of Kurt and his dad. (I can’t say Kurt and Burt because it bugs me that their names rhyme). Finn’s mom seemed like she had a pretty good head on her shoulders, and even though Kurt said “The party was my idea. If you’re going to say something, say it loud,” I thought it would have been more realistic that Finn’s mom would speak to him privately about the move. It was worth it though, for the tension between Finn and Kurt. Poor, innocent Kurt really looked at the whole situation like he was Pollyanna, and only thought Finn was upset about their now shared bedroom’s decor. “Not everyone can pull of Dior grey,” he said and promised to redecorate in a pallet that would better compliment Finn’s skin tone.

Kurt tried to bond with Finn over how they were both getting picked on by jocks, but Finn wanted none of it. He told Kurt he should try and “blend in” better, and wouldn’t accept the moist towelette that Kurt offered him to wipe off the Kiss make-up. Again, poor Kurt. It was clear as he yelled “What’s your problem? It’s just a moist towelette!” that he didn’t get that Finn’s anger was about a lot more than make-up removal aid. Things really came to a painful head when Finn returned to find that Kurt had redecorated the room with an (awesome) Moroccan theme.

I’ve got to give Glee credit for allowing a well-liked character to go to a place that was anything but likable. In a way, you could see why Finn acted the way he did. He’s just a kid. He used to be on top and now he gets bullied at school. He knew Kurt had a crush on him, and he felt uncomfortable changing in front of him. So all that pressure and discomfort manifested itself in a very ugly way. Finn lost it in front of Kurt, and started yelling about how “faggy” the decor was.
Wow, was that whole scene emotional or what? I was horrified watching Finn act that way, and it pained me to see the look on Kurt’s face. It turned out that Burt had overheard Finn’s outbursts and his protective papa instincts kicked in. He lectured Finn on his lack of sensitivity, and was clear that as much as Burt was angry with Finn he was also yelling at himself for how he used to think. He said Finn acted in a way he used to act, but he thought Finn was different. He told Finn that he loved his mother, but Finn couldn’t live in his house. It was a painful scene, but I really applaud Glee for dealing with homophobia in that way – Finn’s attitude wasn’t as outright as the other football players, you could even argue that he wasn’t really a homophobe. It showed the subtle ways homophobia can exist in people, and it was nice to see Burt go to bat for his son. (By the way, everyone who’s seen Yes, Dear – did you ever think Mike O’Malley would make you cry?)

I won’t tell you that I love you, kiss or hug you

Finn tried to apologize to Kurt at glee club rehearsal, but Kurt (rightfully) blew him off. When Puck performed a song for Quinn with the help of some of the New Directions guys, it was nice to see how the lyrics suited Finn as well. Puck had realized what a terrible baby daddy he was being after he suggested that Quinn name the baby “Jackie Daniels”. He performed “Beth” and told her he’d like to be with her when she delivered the baby and suggested she call their daughter Beth. It was a sweet, touching moment that got a little bit lost among the other drama in the episode. 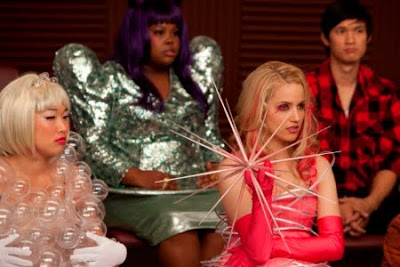 Mr. Schuester had spoken to Shelby about her relationship with Rachel previously in the episode, and the conversation was a little weird. I still don’t understand why there could be no relationship between Rachel and Shelby. Because Rachel isn’t a baby anymore? Because she didn’t want to confuse Rachel? How? For that reason, the final scene between Rachel and Shelby wasn’t my favorite. Even the final performance of “Poker Face” was a bit lost on me. Don’t get me wrong – it was good. Lea Michele and Idina Menzel performed it “marvelously” but the scene fell short for me.

In the end, Finn came to school dressed in a Gaga-Meets-The-Queen red latex dress and stood up to the jocks on Tina and Kurt’s behalf. It was a nice ending that proved what we knew all along – Finn is a good kid deep inside, and can overcome his flaws just like Kurt’s dad did.

Overall, I thought it was a great episode of Glee. The lack of Sue Sylvester was a bit disappointing, but the performances were great and the scene with Kurt, his dad and Finn will go down in Glee history for me.

Other great quotes and moments from “Theatricality”:

What did you think of Glee going Gaga? Are you as excited as I am for the two final episodes?