All of our group has arrived! It was pouring down rain! It was not a very fun Halifax welcome for our girls and their men coming in from Vancouver, Fort MacMurray and Ottawa! We all swore to them that it was JUST sunny and beautiful up until then, but I don’t think they believe us! lol

So our first official day all together was kicked off with a lobster boil at my house! It doesn’t get any more Nova Scotian than that, does it?! Lynn arrived with all of the lobster that she managed to get at an extremely reasonable price! Here in Nova Scotia we are used to paying anywhere between $8 – $11/lb, but we were lucky enough to get this entire load for only $4/lb! I know, right?! I learned later on from Cat’s squeeze Mike that it wasn’t unusual or unheard of for it to be sold at $18 per pound in Vancouver! Wow! The things you take for granted being a Maritimer!

So we get all the lobster unloaded and then Lynn and I are like, “okay now what?” 😀 Even though we are born and raised Nova Scotians, I had only cooked a live lobster myself once just last year and it was only two! 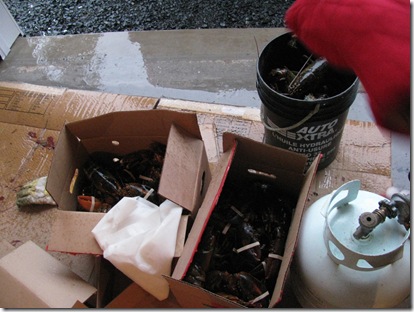 So we fired up the propane lobster pot in the garage since it was raining and well, you guys know what happens.. 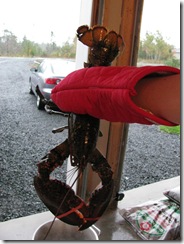 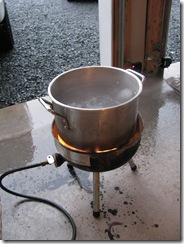 There were soooo many lobsters that we had to fire up 2 more pots on the stove just for lobster and another one for corn and butter! This is what my stove looked like after: 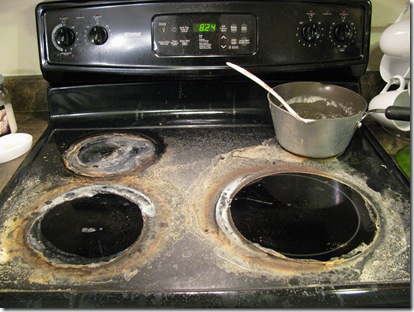 Lynn and I felt like we were working in a restaurant trying to keep everything cooking and timing everything right! We were running back and forth between the stove and the garage cooking up like 4948348 batches of lobster, the stove boils over like 10 times, we got Lesley and her little cutie petutie were shucking corn, and lots of drinks, laughter and excitement ensued: 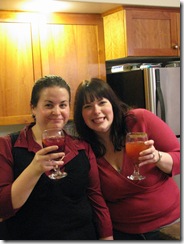 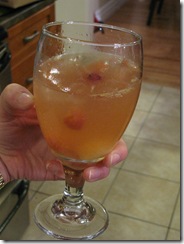 It was a little nuts keeping up with the lobster, but I still somehow managed to get into the sangria! So.worth.it!

And we ended up with a sink full, a huge turkey roaster full and a big huge bowl full of one of the finest delicacies we know: 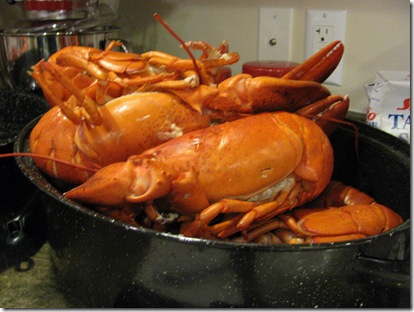 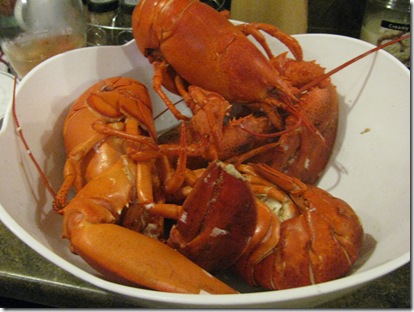 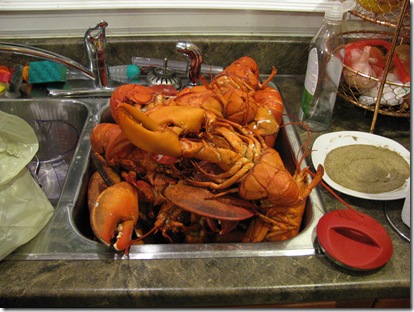 Then 2/3 of us managed to fit around my makeshift large table to feast: 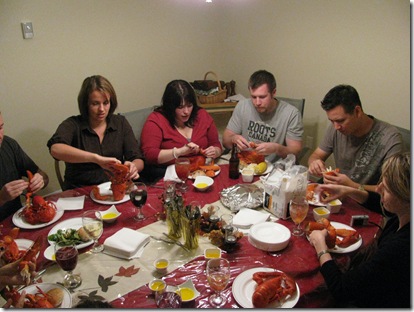 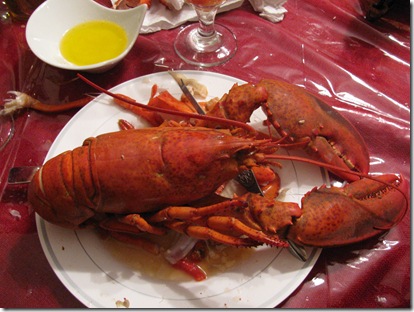 It was Cat and Amy’s first time having lobster! And even though I’ve had it many times, Tasha did not disappoint when convincing 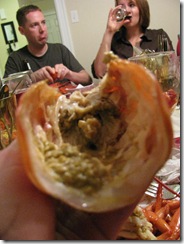 me to try the “green” part on the inside. I had never eaten it in my life because I grew up being told that it was poison! lol Tasha introduced me to escargot many years ago and ever since it has been my favourite “treat” at The Keg and I absolutely love it. So I gave it a try! I can’t remember what she said it was called! I call it “lobster guacamole” “:-D It tasted very creamy and had the essence of lobster and was delicious.

I dunno what Andrew is so sad about, he’s eating lobster! 😉

This was the far the best lobster I have ever had in my entire life! I dunno what it was that made it different, but it was so rich and sweet and amazing! It might have something to do with the company for which it was enjoyed 😉

Lynn was adventurous enough to go for the mother of all lobsters! 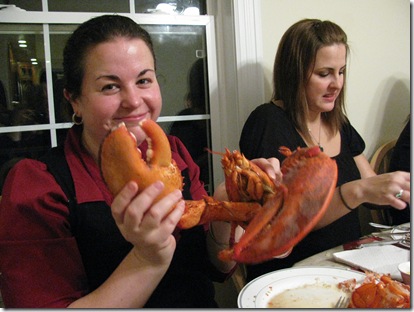 LOOK HOW FREAKING BIG THE CLAW WAS: 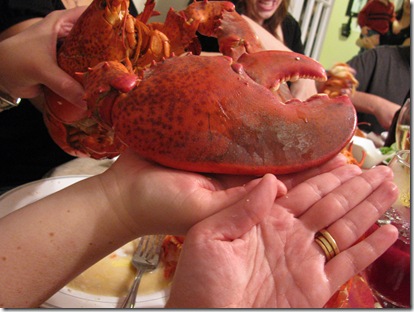 Lucy was behaving relatively good considering that there was about 18 people at the house! She barked some, not too much, but kept scarring Little J 🙁 I did not like that at all!

Jaime got up for something and Lucy thought she’d pretend to be just another member of the table eyeing all that lobster! 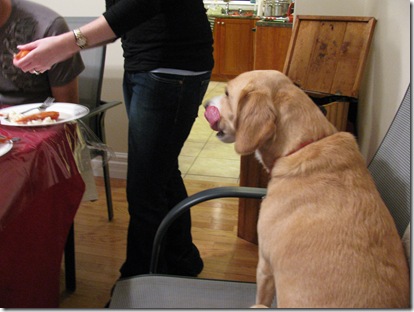 And there wasn’t just lobster (although it was plenty on it’s own!). We had various salads: potato, macaroni, Jaime’s “bigass salad,” rolls and corn: 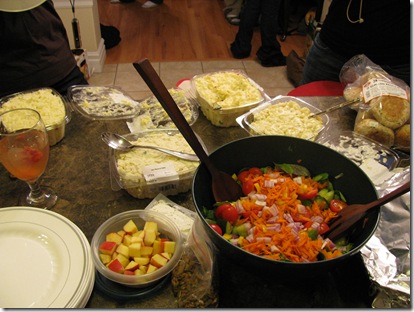 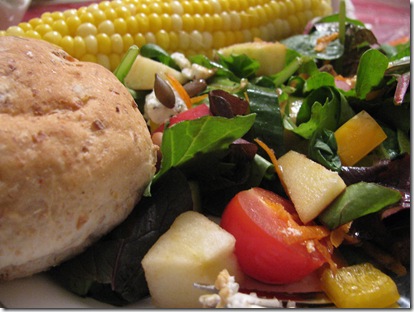 I ended up eating two lobsters and about half of my plate above. I was stuffed!

Then Lesley was my cleaning machine saviour and starting attacking dishes and my poor stove! Les loves to clean! Not a bad friend to have around! 😉

Then after we got some things cleaned up, Lex brought out the most amazing looking dessert of all time: “death by chocolate”: 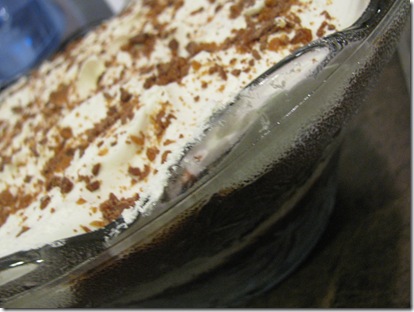 It was a trifle style dessert with cake, pudding, cool whip, kalhua, and scor bits! It was light and an absolute perfect dessert that didn’t weigh you down: 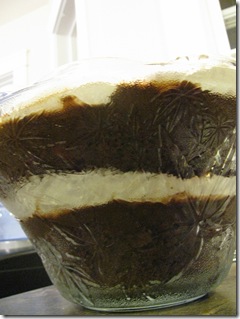 Then the beautiful Lex and her Mister, Dave dove into the dishes too! 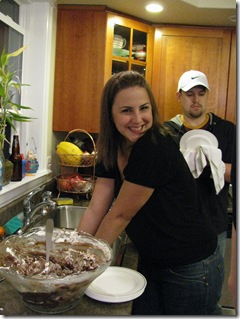 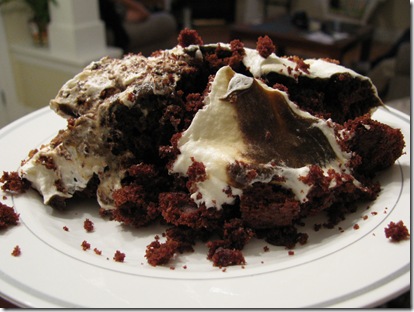 The girls hung around the kitchen and gabbed, gabbed, laughed and gabbed….a little “shop talk” about our favourite “other” bloggers and I could hear the boys laughing at us in the distance listening to us talk “shop” while they watched the hockey game (a few of them caught in action not as enthusiastic as we were) Boys will be boys!: 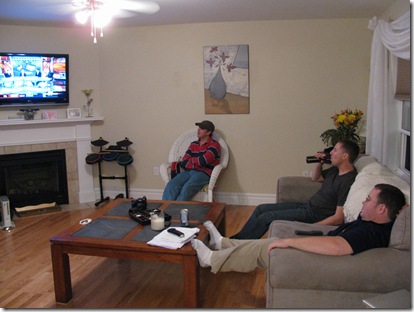 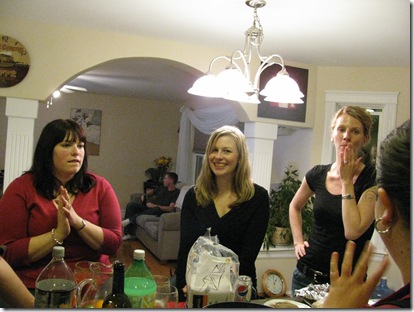 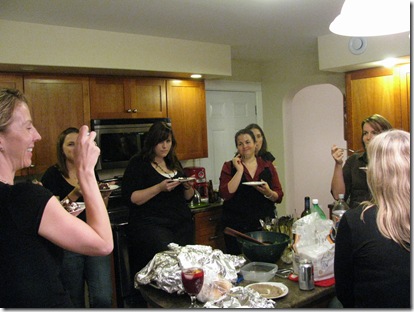 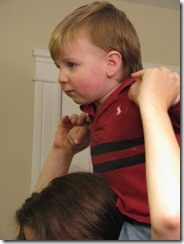 Little J was absolutely adorable and even got up to sing when they hooked up Rock Band and it was the cutest thing I ever saw! Lex got it on video and I can’t wait to see it! I didn’t get very many pics last night, running around like a mad woman, but the other ladies have tons! 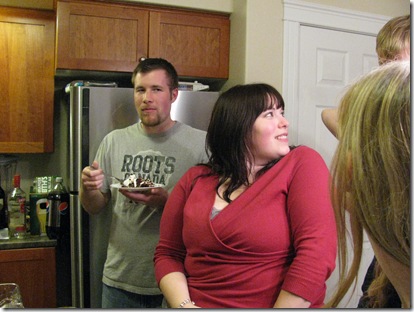 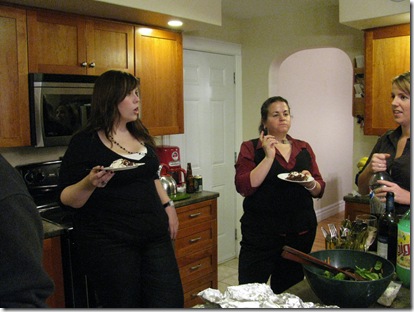 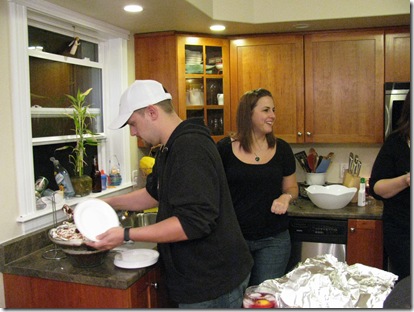 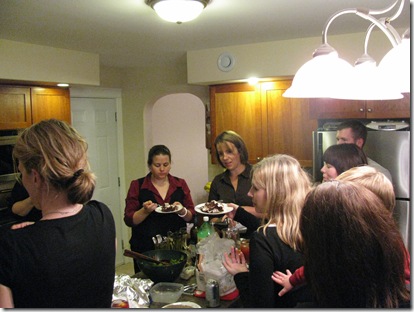 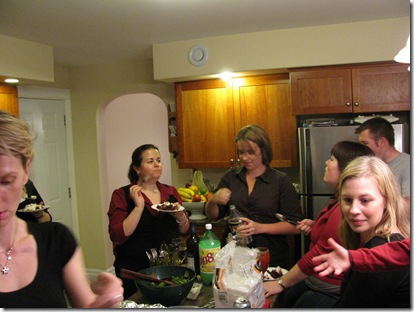 By that point I was really just holding up my camera and snapping just “hoping” that some good ones would be in there somewhere!

Shortly afterward, the girls decided to take “our” party downstairs so that the boys could actually “hear” the hockey game and we gabbed and gabbed and I hated the thought of turning in for the night for a regular work day, but some sacrifices are worth making for amazing friends 🙂

Stay tuned for our next adventure: Keith’s Brewery Tour and down town Halifax on Thursday night! I heard there were a few cruise ships and boats docked in the harbour as of this morning, so down town could be a crazy night!

P.S. Even though you are planning a GTG like this for months and the excitement snowballs, these amazing women completely live up to every single ounce of fun that we had expected!

We are all like old high school friends!!! It’s so natural it’s insane!