The day finally arrived. I put my Ambassador sash on (I won the title of Burger Ambassador after being selected by The Coast), and ventured out into the snow-filled city of Halifax, ready to embark on my week-long burger adventure.

For day #1, I managed to get to 8 different restaurants to try their contributions for Burger Week. Joining me on the first leg was Olivia, Jordan, Savannah, Ryan, Don, Drew, Sacha, Ian, Nadine, and John, and the majority of them have already agreed to join me for most of Burger Week (they have been appropriately named “Team Life of Burgers”).

Burger #1 – The Classic from Bearly’s/Ace Burger 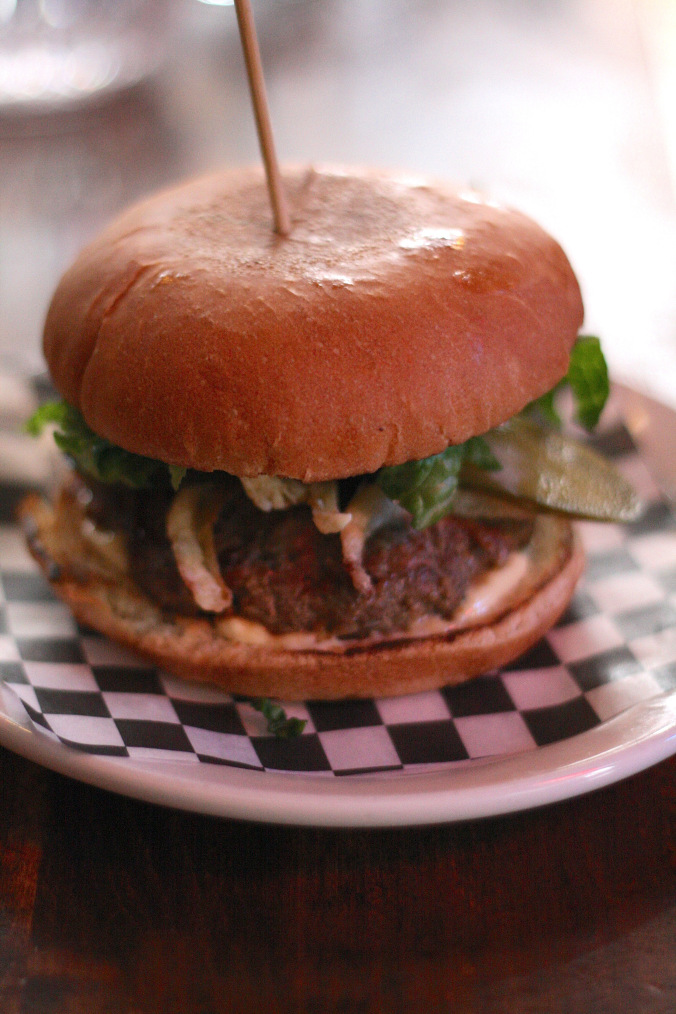 The Classic from Bearly’s/Ace Burger was a great choice for the first burger of the week. The burger was a hit with everyone at the table. The patty was so juicy, and had an awesome flavour to it. The addition of the dijonnaise was great as it really worked well with the patty. The group consensus was that the pickles were delicious and very welcome on this burger. I also really liked the bun because it tasted fresh, and it was the perfect size for this burger. For this burger, we were also joined by fellow Burger Ambassador Vicki, and last year’s Ambassador Lindsay, who runs the Eat This Town blog (look for her post about this meet-up!).

Savannah: “The beef used in this burger is delicious!”

Ryan: “I thought the composition of this burger was great” 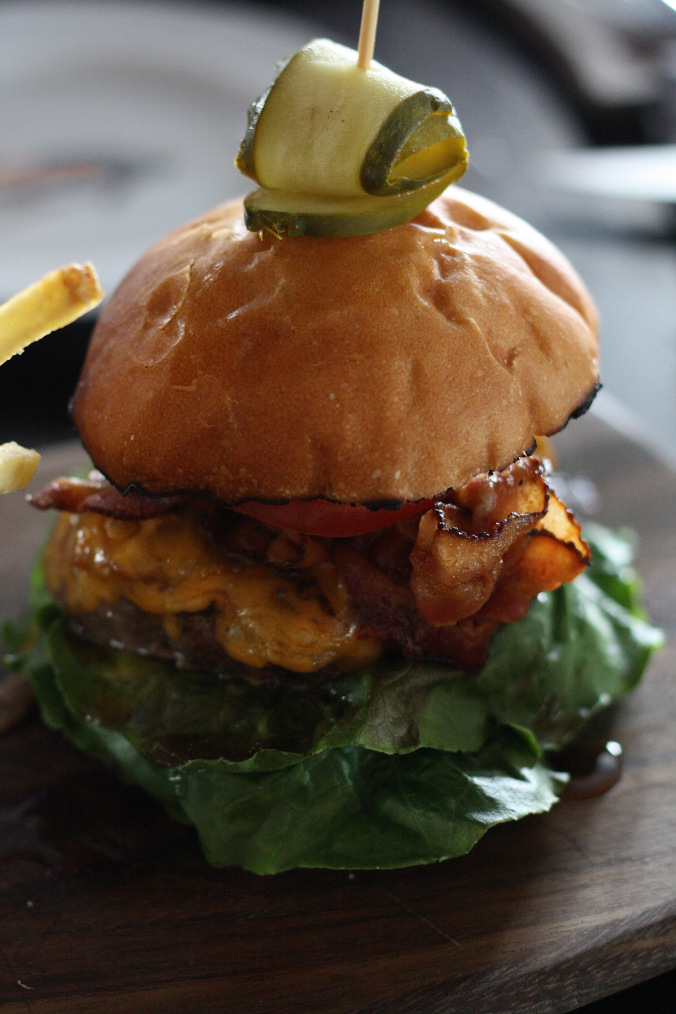 The first thing I noticed about the Tenderloin Burger from The Bicycle thief was the bun. It was so fresh, and toasting it was a great choice on their part. The burger patty itself was super juicy and full of flavour, and it was a top quality piece of meat, not just in my opinion, but in the opinion of the whole group. The bacon was super tasty, and I really enjoyed it on this burger. Overall, this was a very solid burger.

Jordan: “As someone who doesn’t usually like cheese on their burger, I really enjoyed it this time!” 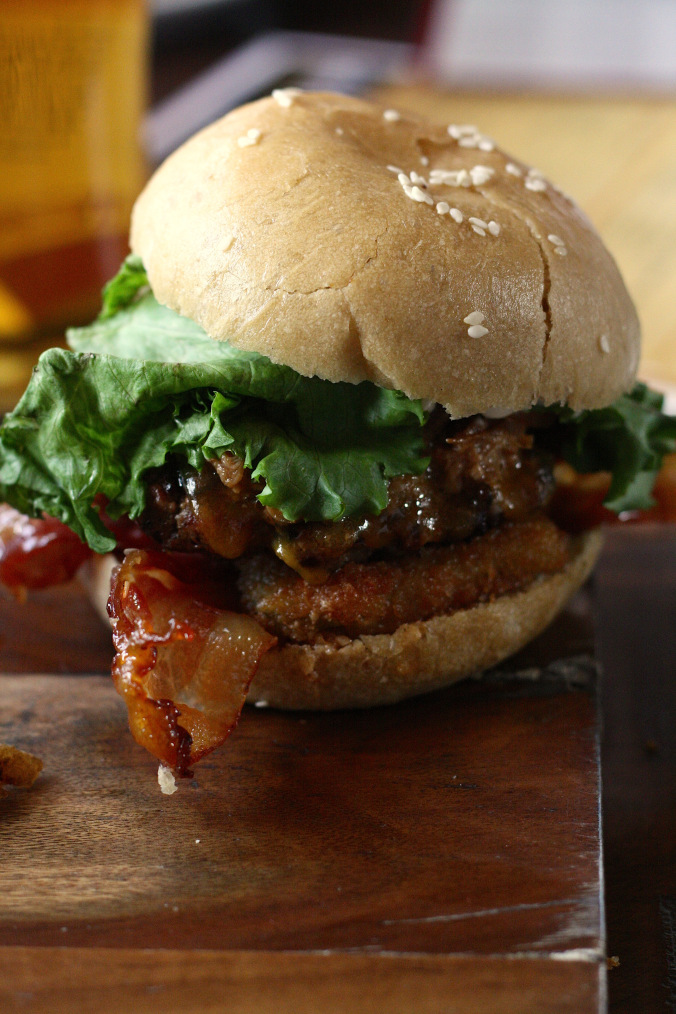 This burger did not cut any corners when it came to deliciousness. The maple candied bacon was so delicious, and I could not get enough of it. However, I think the best part of this burger was the pulled pork. The IPA BBQ flavour was amazing, and it really took this burger to a whole new meaty level! If I had to choose one complaint about this burger, it would be that the bun didn’t exactly hold up, and the bottom piece was pretty much non-existent near the end. This burger killed it when it came to flavour, though.

Olivia: “I really loved the pickles!” 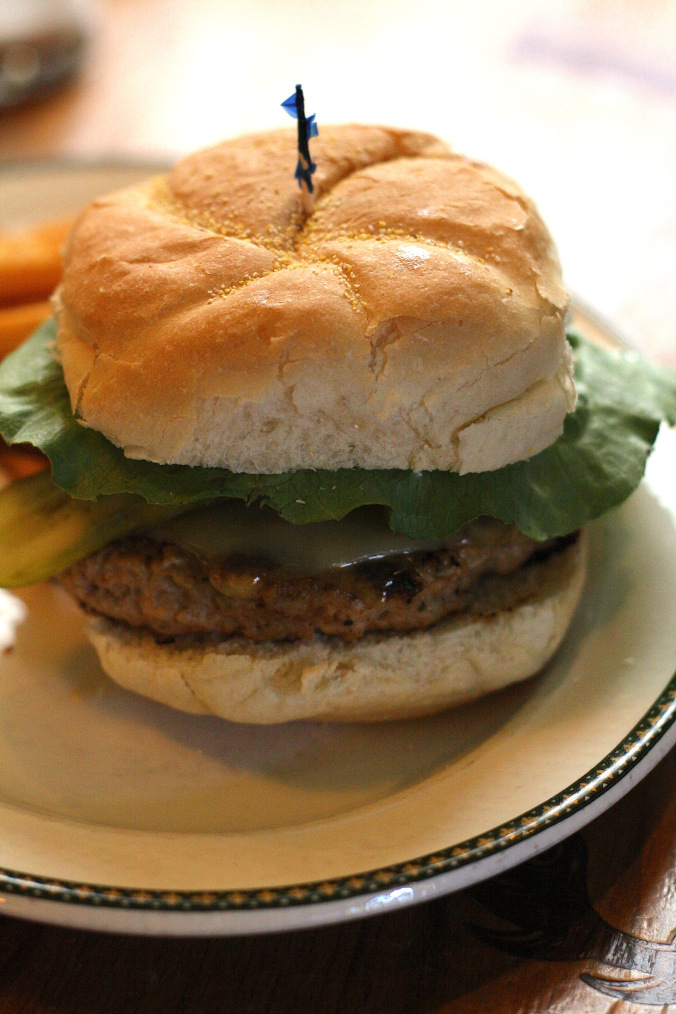 Proving that all burgers don’t have to be made from beef is the Chipotle Turkey Burger from The Old Triangle. The turkey patty was seasoned really well, and it allowed the flavour of the turkey to shine. The chipotle mayo gave the burger the nice little kick that it needed. We were under the impression that this burger was supposed to have guacamole on it, but ours definitely didn’t, so we aren’t sure what happened there. Also, this bun crumbled quite a bit, and sadly, it didn’t hold together very well. Still a pretty decent turkey burger.

Savannah: “The patty wasn’t dry, which was really nice because this can be a common problem with turkey burgers”

Burger #5 – The Big Smoke from Flipburger 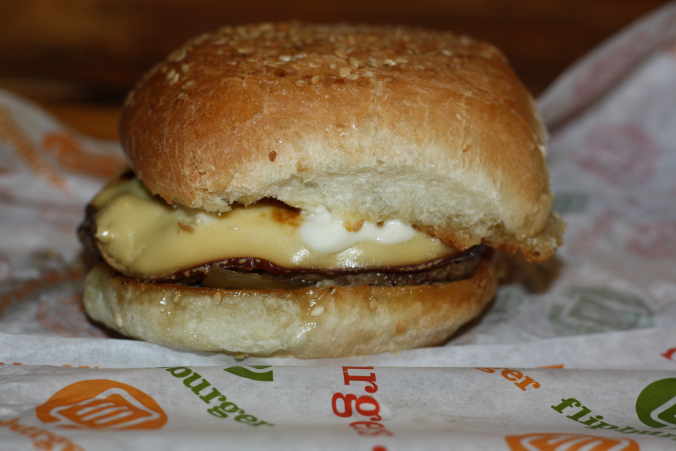 After 4 burgers, The Big Smoke from Flipburger was exactly what I needed. The deliciousness that is this burger was almost overwhelming! The hickory smoke infused mayo was loaded full of flavour, and had a great smokey taste while providing a satisfying creamy texture. The gouda was a great choice on their part, and I could see it quickly becoming one of my favourite toppings. The patty was cooked to perfection, and it had a great grilled taste to it. This burger is an early contender for one of my favourite burgers of Burger Week!

Ryan: “The execution of this burger was great!” 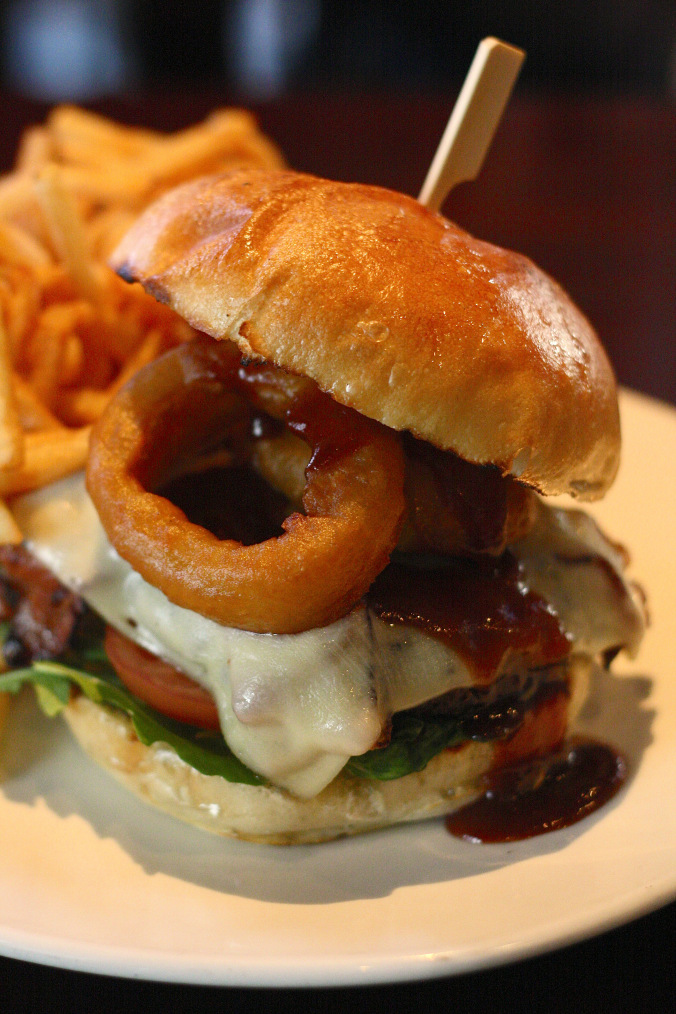 The massive burger that is The Devil Burger was the first one that had one of my favourite toppings, onion rings! As always, they were a very welcome addition to this burger. The swiss cheese was great, and there was a good-sized portion of it. Aside from the onion rings, I think my favourite part of the burger was the BBQ sauce. It was spicy enough to give the burger a kick, but it wasn’t too spicy so that those with sensitive taste buds wouldn’t like it. All-in-all, this burger holds it’s own amongst the other Burger Week burgers.

Burger #7 – The Tempo Burger from Tempo 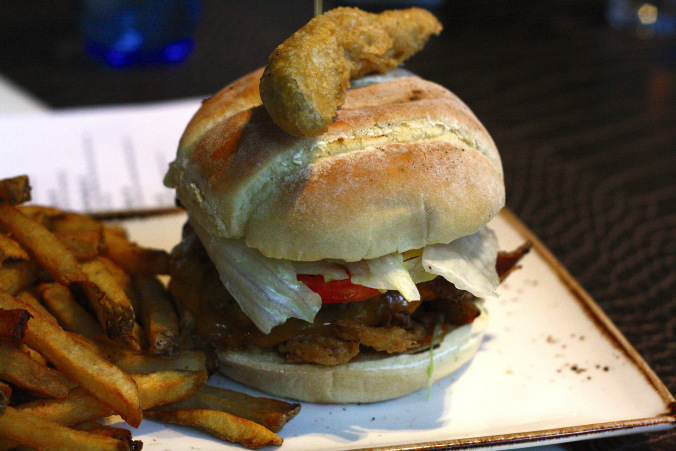 Getting to burger #7, our stomachs were getting full, but our determination wasn’t wavering. My favourite part of this burger was the fried onions as they had a very similar taste to that of onion rings (can you tell by now that I really like onion rings on burgers?). The candied bacon added a sweeter taste to the burger that was nice, but that being said, this burger was lacking when it came to mouth-watering taste. There just wasn’t anything about it that made me say ‘wow’, which was kind of disappointing given the fact that this burger costs $14.

Savannah: “I really liked the candied bacon, but I wasn’t really a fan of the sweet and savoury combination of this burger” 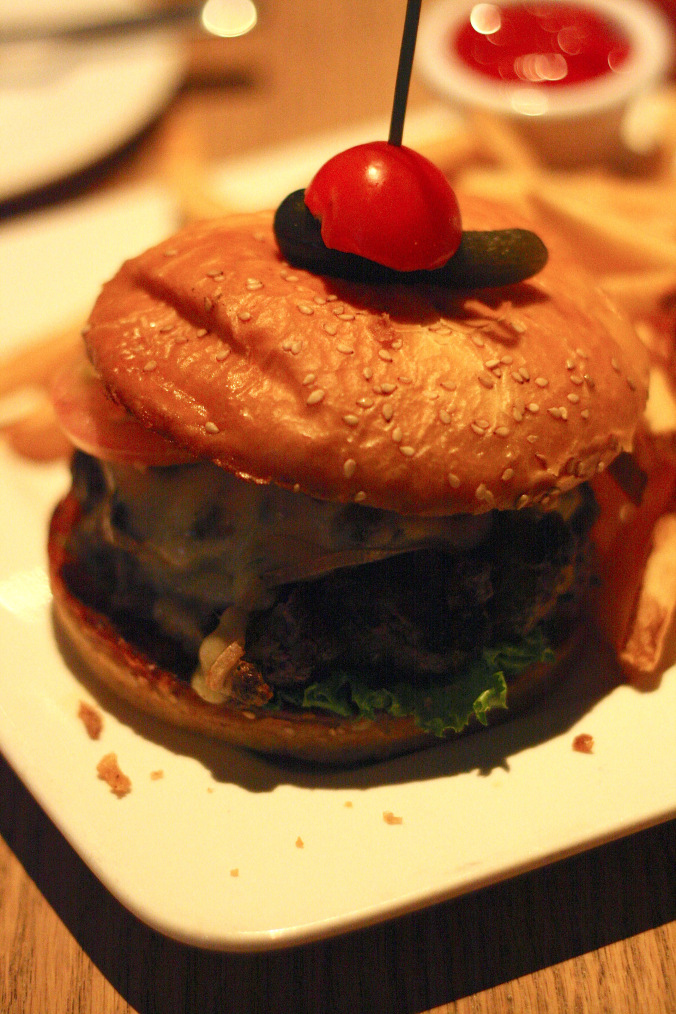 The final burger of the day did not disappoint. After the first couple bites, we were all agreed that there was a surprising spicy element, and it was pretty delicious. My favourite part of this burger was the pork belly jam, as it worked really well with the patty. The bun was a bit on the flimsy side, but that wasn’t a deal breaker. This burger is definitely worth a try!

Be sure to follow me and the Life of Burgers team on Twitter and Instagram (@lifeofburgers) as we work our way through the remaining 6 days of Burger Week!