Day 4 was the big day! I did a big ‘ol burger crawl of downtown Halifax with my friends Em, Talix, and Tinfoil (of Burger Quest 2013). We started at 1pm, forgetting that Halifax practically closes down on Sunday afternoons! We found the Argyle open, and ordered “The Local”: Oulton’s ground beef, shredded NS lamb, poblano peppers, monterey jack cheese, avocado, chipotle mayonnaise and tomato. 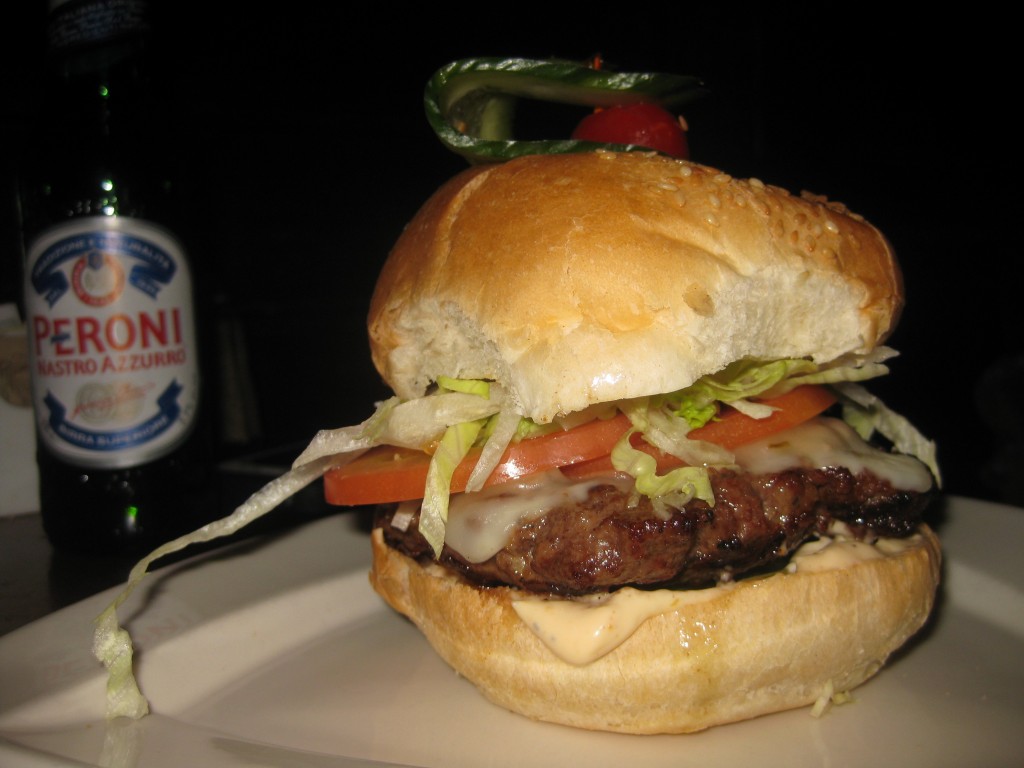 The beef had a nice seasoning to it that coaxed itself into the subtle heat of the poblanos and the chipotle mayo. It was a decent burger, except that there wasn’t much lamb, and the avocado was under-ripe. So onwards we went!

I was lured to The Auction House by the promise of an “Andouille Burger”. Andouille (pronounced “An-doo-wee”) is a Cajun sausage often featured in jambalaya. This burger was a six-ounce ground beef and andouille sausage patty topped with honey- infused goat cheese, chipotle aioli and baby arugula served on cornmeal-dusted artisan bun…. for $5. Yes please! 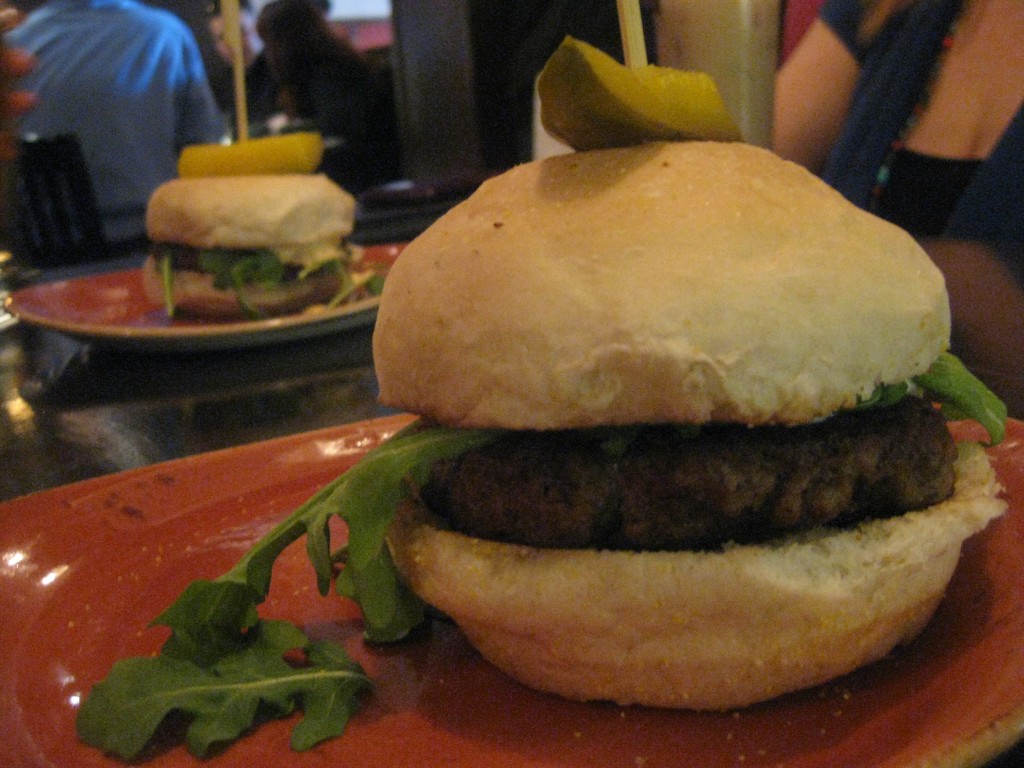 The Andouille from The Auction House: $5

I was hoping the andouille would be spicier. The goat cheese and chipotle aioli kind of overpowered the arugula, and even the meat, though it was still really tasty and a good deal for $5.

Next we trekked up the slopes of downtown Halifax to burn off some burgerfat, only to replace it with peanut butter! My burger comrades had never before tried the legend that is the Darrell’s peanut butter burger, so this was a must. After all, how can you say no to a stick-to-the-roof-of-your-mouth-good $5 peanut butter burger? 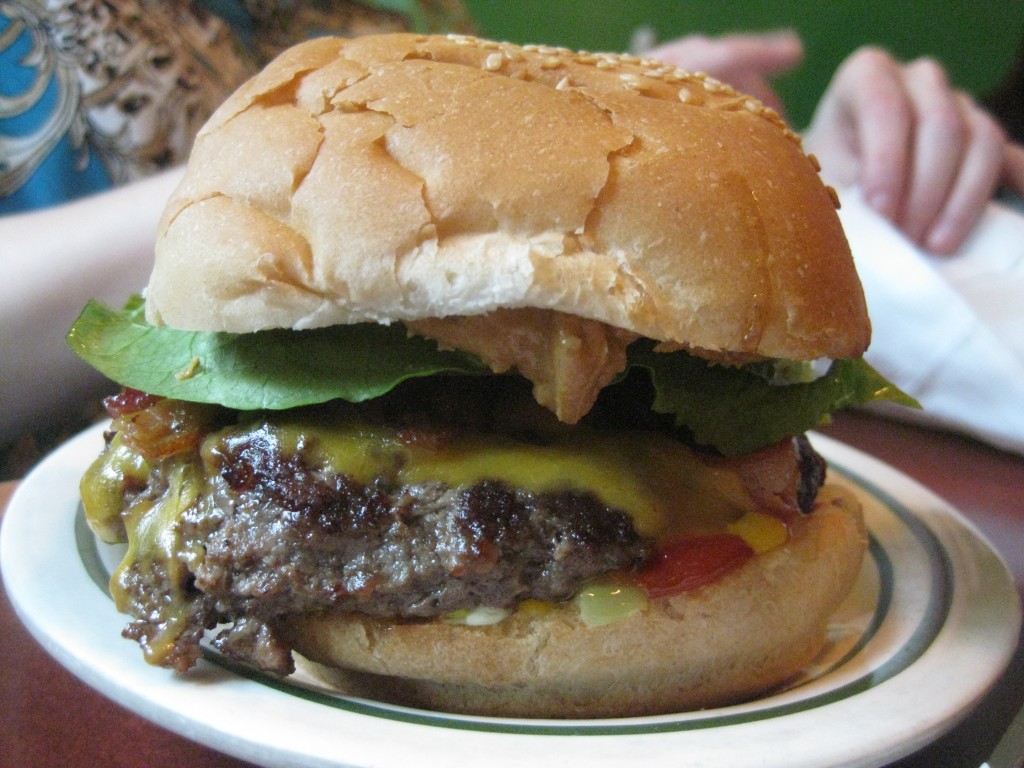 The Peanut Butter Burger from Darrell’s: $5

I always forget how large this burger is! It is big and sloppy and oozing with peanut butter. Ketchup, mutard, and relish balance it out with some tang, but the peanut butter is the central flavour. My burger troop felt that the peanut butter was overpowering, but they were also surprised how this unlikely condiment is strangely complimentary to beef. Mmm hmm, yes it is.

We had to go on a waiting list to get into 2 Doors Down, but it was worth it. Their “Smokehouse” sliders were stacked with flavour: bacon and onion jam, smoked local cheddar, gouda, crispy shallots, chipotle aioli and chorizo BBQ sauce. Wow! 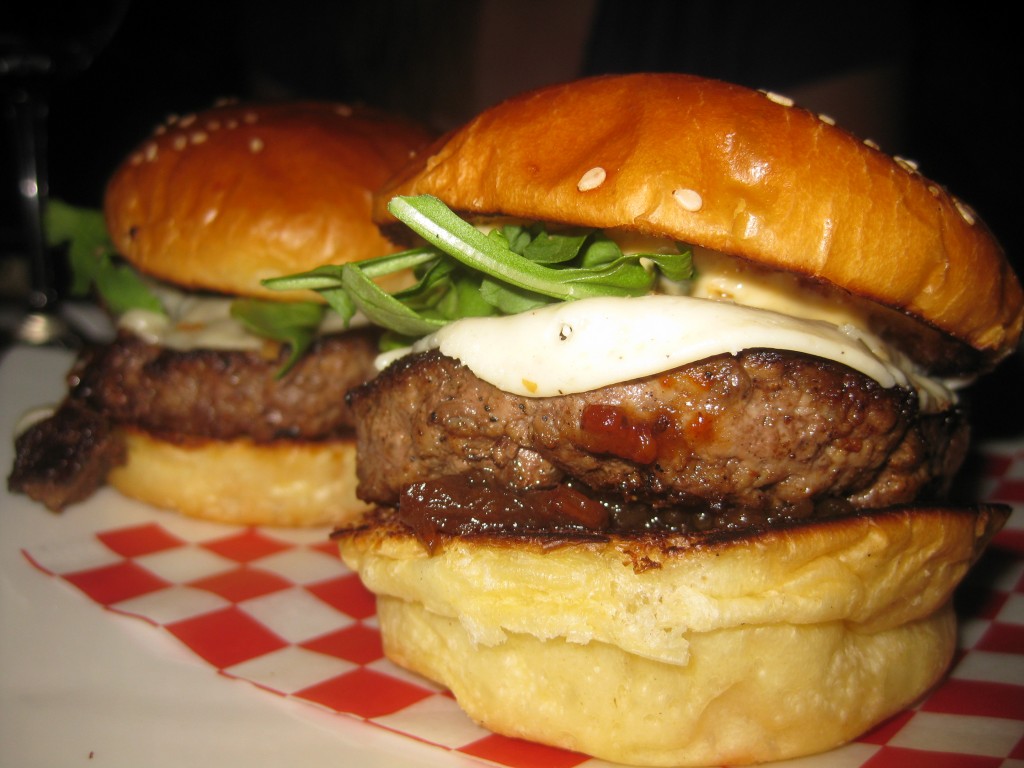 Smokehouse Slider from 2 Doors Down: $5

Now before we get carried away, remember this is a slider. It is a 4oz patty of choice meats on a brioche bun. You will want to eat several of these. I had to settle for one. It was a charming little burger, exploding with flavour and unbelievably moist. Just look. This is how you cook a burger: 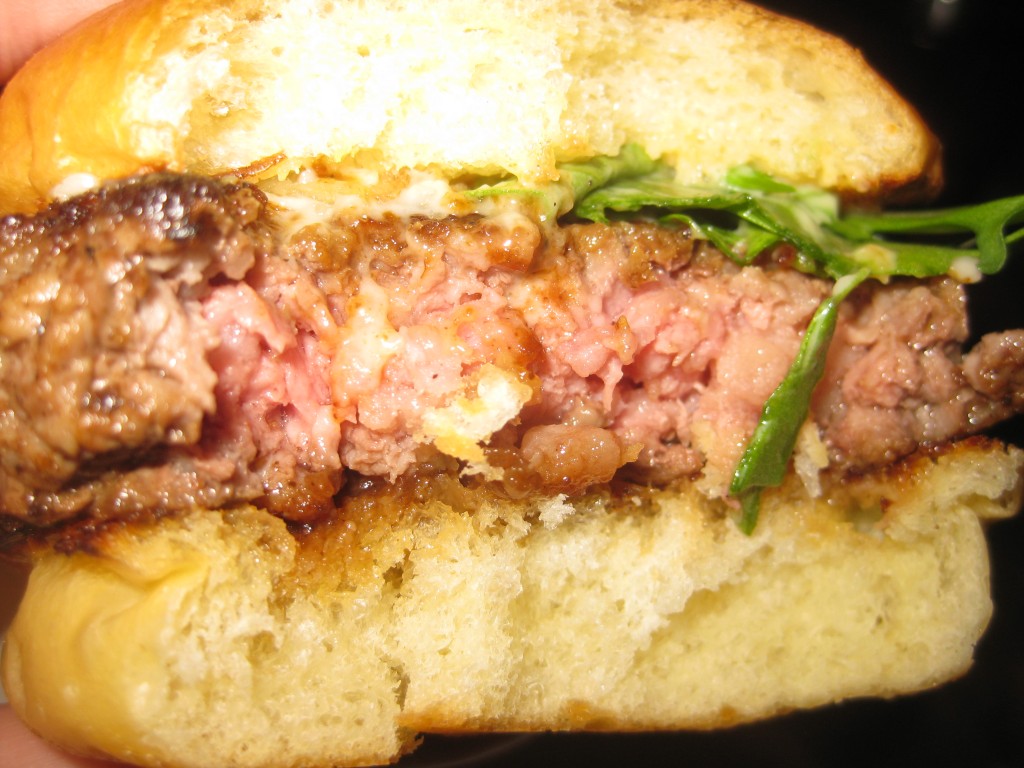 Next up: The Grill at CUT. What a nice little dining room! It is both classy and cozy, not to mention our server was a sweetheart! Our table had sofas and pillows, which were becoming necessary to keep our meatlogged bodies afloat. The “Gangnam Burger” was six ounces of Nova Scotia AAA Black Angus ground beef cooked on a 1,500-degree broiler. It was topped with gochujang aioli and kimchi. FYI, gochujang is Korean red pepper paste and is the condiment of choice for one of my favourite dishes – bibimbap! 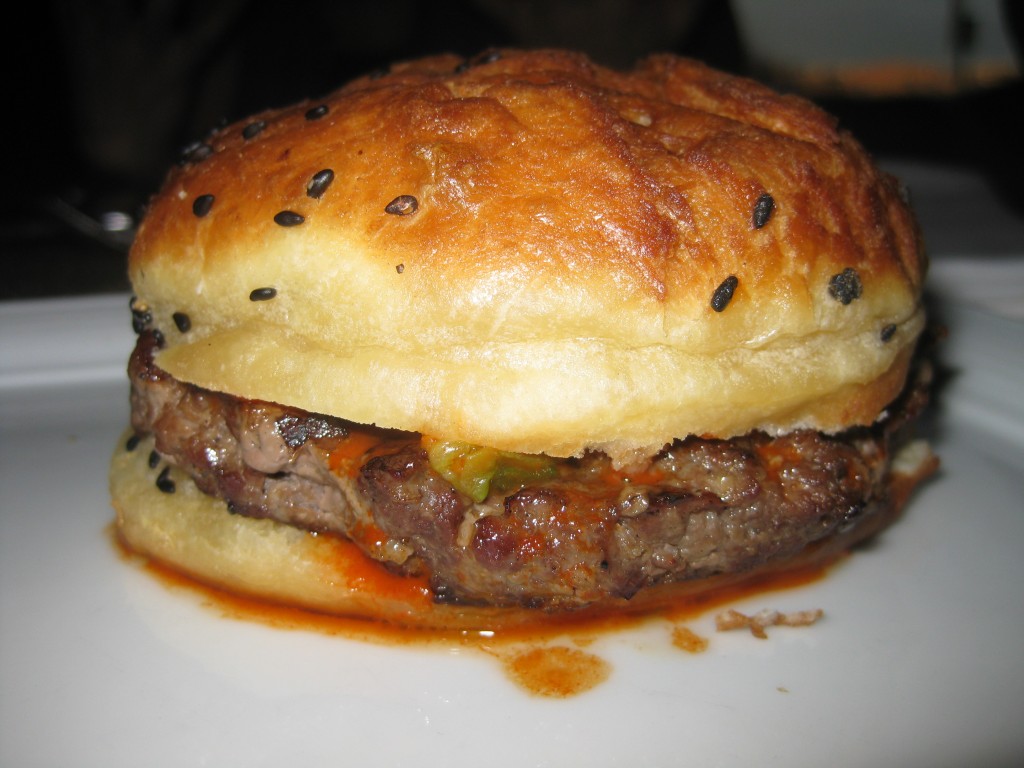 Gangnam Burger from The Grill at CUT: $7 with $2 towards FEED NS

It could just be that I love kimchi, but I thought this burger was swell. The Korean ingredients provided just the spicy punch I’ve been looking for all weekend, and the patty was dense and beefy. Yet perhaps the highlight of this burger was the house-made bun. I don’t know what the folks at CUT are up to, but that was one stellar bun. I could have just eaten the bun slathered with kimchi and gochujang, it was so good. 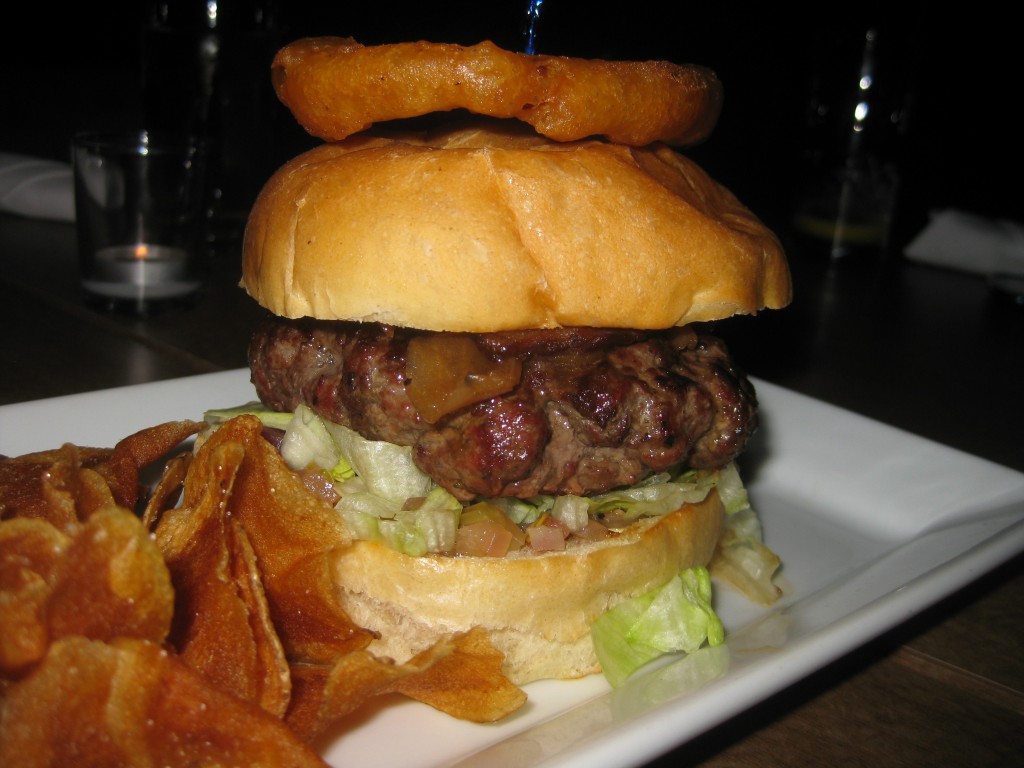 Brisket Burger at Canvas: $15 with $2 towards FEED Nova Scotia

Back when Canvas was “Bridges” I had a burger there that was unexpectedly good. So I thought I would give this one a shot. The “Brisket Burger” was Nova Scotia ground brisket, topped with black mustard, pan-fried onions, smoked bacon, cornichon relish and shredded iceberg lettuce on a toasted bun. This was big beefy goodness, with that classic mustard/fried onion flavour, and good bacon. It also came with kettle chips, and an onion ring. We were brazen enough to order dessert. I’m not usually a dessert gal, nor did I photograph it, but I feel as though I should tell the world that the Napoleon was superb.

Phew! Day 4 of Burger Week was action packed! We tried new restaurants, ate too much, and chatted with other burger questers. It was good times with good friends and good food, and that’s really what Burger Week is all about.