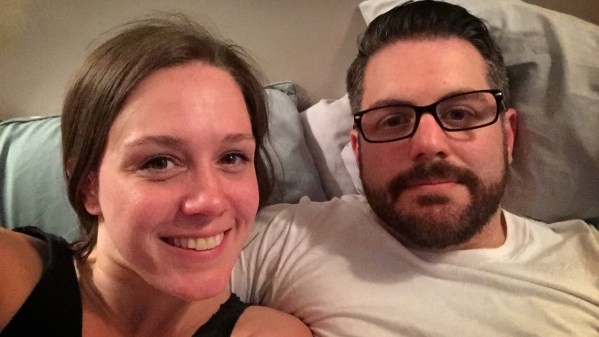 Dan and I have been watching a lot of Netflix this summer. This is because of three reasons:

Now when we turn on the TV at the end of a long day or during the middle of the weekend, we turn on Netflix. It is pretty much our only option. So, we’re trying to find things to watch that we will both enjoy. It isn’t actually that hard. I’m pretty easy going**, so I just let Dan pick and I’m usually cool watching what he wants to watch.

We’ve been drawn to both space and dystopian genres lately. Since Dan is much more likely to turn on a show with absolutely no previous knowledge of it or what it is about or whether it is any good, I have found myself watching things that I never would have thought to choose myself.

I don’t know how we started watching it. But we did. And I couldn’t get enough of it.

Dark Matter is a Canadian space opera*** based on a comic book. It is so deliciously Canadian! I’m prone to IMDB**** whatever I watch and I had to laugh about how much overlap all the actors have on other Canadian programs. Not to mention, I have been following one of the minor actors on Twitter for years, not because of her celebrity but just because. It felt cozy. And maybe that isn’t how Canadian content is supposed to feel, but I kind of loved it. It is as if this country really is small and familiar, but screw it, we can still make good television!

The point is, I’m pretty positive about most things. I’m rarely critical. So you really have to take my reviews with a grain of salt*****. That’s why today I’m launching the first****** He Says/She Says Reviews where Dan and I will BOTH review something we’ve watched together. That’s two opinions for one! You’re welcome.

Once we started watching this one, I didn’t want us to stop. I have a few minor complaints but all in all, it completely sucked me in and held on and I cannot wait for Season 2 to show up on Netflix. In fact, Season 2 is actually airing NOW on cable, making me incredibly sad that we just cancelled it.

Here’s the nitty gritty, though. While the rest of the show does not necessarily feel low-budget, I cannot get my head around the hokey star-static that you see whenever the ship flies through space. This star-static (does it have a proper name?) is also shown during the opening credits, and it really pulls down the whole experience for me. The show is good but this effect doesn’t do it for me. Still, this one effect is incredibly minor and I’m able to suspend my disbelief on everything else.

The storyline, in my opinion, is riveting. Dark Matter has you (and the characters) guessing from episode one and you don’t stop until the final second of the last episode. I connected with the characters and second-guessed their motives and I always wanted to know more.

This show is definitely worth bingeing on. Just accept my apologies in advance for their only being one season (so far). You’ll want more.

Dark Matter starts the same way my review of it does. Nobody remembers anything. The crew awakens from their pods with their memories wiped on a space ship in crisis. My crisis was no less real with Laura saying “Dan! Can you please just contribute a few words to my blog post on Dark Matter? I asked you two weeks ago!”

I hopped onto YouTube to pull up the Dark Matter trailer and refresh my memory on what the heck the show was actually about. Right. Space opera. Blue hair. Some swords. A guy with a big gun. Got it!

What works with Dark Matter is the mystery. I love a show that can keep you guessing. That’s how Lost managed to leech 6 seasons worth of my attention. But unlike Lost, the writers of Dark Matter actually have a direction in mind.

The show dances on the line of campy or predictable. Two traits that we largely left behind in the oughts. It would be well served to add some drama by demonstrating a willingness to kill off a main character or two and raise its level of edginess. [Laura’s Editor’s note: OHMYGOSH, Dan, was THAT A SPOILER?!]

So while I think Dark Matter might benefit from a Red Wedding, it’s worth your time and attention in its current incarnation.

This post was inspired by Netflix. I am a member of the Netflix Stream Team and as such I have been compensated for this post with a complimentary Netflix subscription and a few other perks. I’m honoured to have been a StreamTeam member for the last three years. The stories and opinions are all my own.