One thing that has caught me by surprise is that for some reason, I keep craving “Pepsi” about every two weeks.  Pre-pregnancy, I was more of a diet pop drinker and the taste of full sugar (or should I say, “full high fructose corn syrup”) pop was “too” sweet for my tastes.  But ever since I’ve been pregnant, I’ve decided to stay away from both.

Currently, during the course of a day, I drink:

– 1 cup Tropicana OJ (calcium + vitamin D fortified) with breakfast to take my prenatal & folic acid (this has replaced my morning coffee which wasn’t nearly as bad as I thought it was going to be.  OJ is delicious, full of flavour, calcium, vitamin C & D, AND folic acid, all the while it helps you absorb your vitamins too!

– with my lunch, I usually have 1c skim milk (calcium fortified) and depending on how many other servings of dairy I’ve had that day maybe another one with supper.  Although yogurt has been a regular on my menu of late.

– the rest of my day I”m drinking water, water and more water usually all through the evening.  Pregnancy has brought me thirst like no other.

For a while, I couldn’t even stomach the idea of fizzy anything.  I used to make POM spritzers with POM juice + club soda, but for some reason that didn’t appeal to me.  It could be because that’s what my drink of choice was on New Year’s Eve when I still wasn’t feeling well?  But then all of a sudden I felt like I reeeeally wanted a Pepsi.  We don’t normally have it around the house, but I asked the husband to pick some up because I felt like I needed it in a real bad way!  So I had a drink and that was the end of it.

Then a few weeks later, same thing!  But this time I decided I was going to “try” to satisfy this craving another way.  I picked up this Santa Cruz Organic Root Beer from Planet Organic: 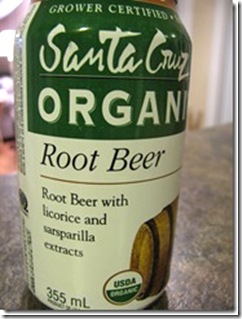 This was a coincidence because one of you lovely readers suggested to me yesterday that I try the local Propeller Root Beer that is made with cane sugar!  I am most certainly going to do that because while the flavour of this root beer was “good”, it definitely lacked on the fizziness factor and I think it was the fizzy part that I was wanting the most!

And last night, I was craving the “fizzy” yummy sweet “Pepsi” again.  And we were going to be watching movies, so I needed “something.”  I decided I would give this a try: 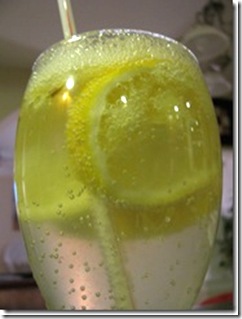 Here we have as much juice squeezed out of the lemon as I could, a squirt of agave nectar and a can of club soda.

The flavour was DELICIOUS and as you can see, the “fizzy” factor was perfect 🙂 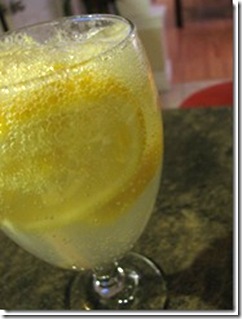 High fructose corn syrup should be avoided whenever possible in my books and while I’m not perfect, I am definitely making a better effort to steer clear!

Do you guys have any “healthier” option bevvies?