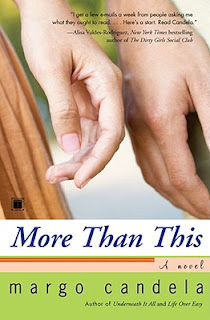 Someone mentioned to me recently that they’d seen a rash of books with titles that refer to pop songs. Is this the latest trend? I dunno but I dug up a few.
More Than This by Margo Candela: The book that started the conversation. The title of this contemporary romance story refers to the song by Roxy Music (although I think my friend knew the 10 000 Maniacs cover better). Back in 2007, Candela did a guest post on a romance fiction blog and mentioned it’s a title she’s pitched to her editor a few times for her books. I guess her editor finally gave in!

It’s always hard to tell if a book with a title that is also the title of a pop song is an allusion or just a co-incidence.

Is Peter Robinson’s novel Piece of My Heart a reference to the Janice Joplin song? What about Joe King’s  Heart-Shaped Box and the song by Nirvana of the same name? Was Rick Bletcha thinking of Joni Mitchell when he named his crime novel set in the jazz world A Case of You? The answer in all cases is yes – although the degree to which the song or artist features in the novel varies. In the case of the above, I think Robinson’s plot and title have the strongest connections: Piece of My Heart revolves around the discovery of a body after an outdoor rock festival in 1969.

Beatles titles are popular for novel titles – probably because they so widely recognized. With Norwegian Wood by Japanese author Haruki Murakami, English readers are given something familiar off right of the bat in a book that otherwise might be a bit of a culture shock (and the song does factor in the story). Canadian author Douglas Coupland named his 2004 novel about lonely souls Eleanor Rigby – a fitting title and one that probably got him a bit more notice outside of Canada. Coupland likes song title names for his books: 1998’s Girlfriend in a Coma is a reference to the Smiths.

If some authors use Beatles titles to create a link to a wide audience – I would put forward that others use more obscure references to find their audience. Brendan Halpin probably got a lot more attention from indie music fans than he otherwise would have when he named his 2006 novel Dear Catastrophe Waitress after the Belle and Sebastian song.

Finally – back to 80s pop songs where this all began. If you’re really into the pop song vibe in fiction you’ll want to check out a first novel from Sara Rainone. Named after a Joy Division song, Love Will Tear Us Apart is “a bittersweet, darkly comic novel [that]… tells the story of six childhood friends reunited at a wedding where secrets are revealed, hearts are broken… By turns a Nick Hornby–esque ode to the way music shapes our memories and an elegy to lost youth in the manner of Bret Easton Ellis…” (Amazon.ca product description)
(oh yeah, and the title of this post is an homage – of course – to the ultimate music nerd novel High Fidelity by Nick Hornby)