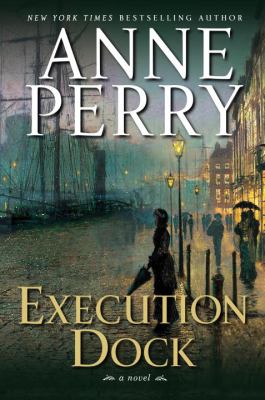 Rather than begin with the crime, the investigation, the trial and then the resolution, Execution Dock by Anne Perry, opens with the trial of thoroughly repellent Jericho Phillips accused of child pornography and prostitution.

Inspector Monk had resumed pursuing Phillips after Durban’s (formerly of the Thames River Police) death. Has Monk been blinded by his loyalty to and admiration of Durban. Did he do less than his usually thorough investigation? Did the abhorrent nature of the the crime shake the normally unflappable detective? And what about Rathbone? Why did Oliver Rathbone agree to represent Phillips on behalf on an anonymous patron?
Perry fans will not be disappointed by the 16th book in the Inspector Monk series. Her careful attention to historical detail make the mysteries a pleasure to read. The characters continue to develop overtime, not losing their individual depth or the complexity of the relationships.
Admirable after 16 books and 19 years.

Another book I’ve read that felt quite similar to Perrys‘ Inspector Monk and her Thomas and Charlotte Pitt books is The Thief Taker by T.F. Banks. Henry Morton is a Bow Street Runner in the early years of the 19th century. The atmosphere and the attention to detail is quite like Perry.

Unfortunately there were only two books published in this series. Sometimes the appeal of a series like this is not only the mystery, but also the development of the characters over time. Both Hester and Monk of the Inspector Monk series have complex backgrounds. The minor characters have a life of their own and have also developed over time adding complexity to the story.

Another mystery series with an interesting premise and engaging characters are the Sir John Fielding mysteries by Bruce Alexander. Fielding was the real life 18th century blind magistrate who created the Bow Street Runners. He was also half brother to novelist Henry Fielding. The stories are told by Jeremy Proctor, a young lad taken up by Fielding. While satisfyingly researched, Alexander stated in an interview that he wouldn’t let a mere fact stand in the way of a good story. Unfortunately for us, Alexander died in 2003 leaving the series unfinished.