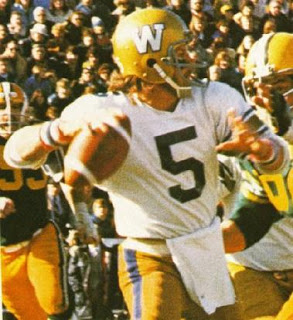 The CFL is Back! Is Anybody Watching
Trying to determine how many maritimers actually watch the Canadian Football League is a puzzling thing. I know most of my friends who are avid sports enthusiasts don’t watch it. You don’t hear a lot of people talking about it and the league certainly does not get a great deal of local media attention. On my radio show for CKDU I have a local pundit for all the major sports but I’ve never thought of getting a CFL “insider”, and even if I tried I don’t know who I would get. Honestly I don’t know anyone who knows more about the CFL than I do.
I’ve always watched the CFL, even when I was a kid. I’m not one of those die hard fans who animantly maintain that it’s a better game to watch than the NFL. Given a choice, I would watch an NFL or NCAA game before any CFL game outside of the Grey Cup. I’d even prefer a Huskies game on Cable 10.
But I’ll sit in my living room with a CFL game on the idiot box while I putter away at tasks. As I’m writing this I’m listening to the Eskimos/Blue Bombers game ( a pretty dreadful affair so far ) from Edmonton’s massive Commonwealth Stadium, a facility far too big for a CFL team to call home. When the Alouettes are playing I’ll pay a little more attention and cheer a little. It’s also nice to get home from work and fall asleep while watching a game in Vancouver (also at an oversized stadium…and indoors at that!)
The CFL benefits greatly from it’s schedule, and the canadian weather. The season begins in the summer and plays the first 80 percent of its game through September. This is good for sports starved fans who do not watch any baseball. The CFL provides something to watch to help fill the void before the NFL returns. Sure you may not know any of the players, the scores don’t make any sense (the Edm/Winn game is tied 9-9 right now), and the players are really small playing on a field that’s way too big. But hey, it’s football! It’s something….isn’t it?
Then the fall comes and the league begins playoffs and they start playing some classic canadian cold weather games. Face it. If the Giants are beating the tar out of the Cincinatti Bengals and the Patriots are killing the Jets, you’ll sit back and watch the Western Semi Final between Calgary and Saskatchewan in a november snow storm. It’s fun! Of course the game is a puntfest…two downs-punt, two downs-punt. But it’s fun to watch guys playing football in horrible weather in front of thousands of hearty canadians cheering with watermelons on their head and drinking Tim Hortons. It’s a part of who we are.
Well, maybe not maritimers. But if they ever were to put a CFL team in Halifax I bet you’d go to at least 1 game. So would a lot of other people. Football games are events. No other sport is able to market itself as a weekend long celebration like football. At the very least, the canadian game is unique. The rules may have been created by a couple of drunken fraternity brothers on the campus of U of T sometime at the turn of the century for all we know, but it is unique.
No Yards.
Rouges.
Racing stripes on the football.
25 yard End zones!!’
No wonder it’s the only football that Kramer watches.
If you care, I’ll have more on the CFL in future updates, including what the league has to do to stay successful (yes, the CFL is actually a success in every city except Toronto and Hamilton), and what teams are the teams to beat. Which is another neat thing about the league; heading into the season nobody knows who is good and who is bad. Well, except for Hamilton. Everybody knows they’ll be comically bad. 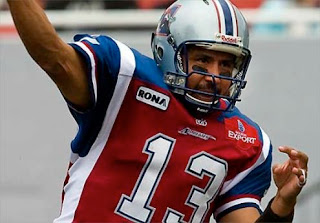 CFL Notes
Classic examples of how good and bad the league can be in the first week. Last night’s re-match of last year’s Grey Cup between Montreal and Calgary was a great game. Tonight’s game with Edmonton and Winnipeg is awful. When the offences are clicking the CFL can be a lot of fun to watch. But when the offences are stagnant, watching the CFL is painful….Jesse Lumsden, making his debut for the Eskimos, was injured on his first play in green and gold and taken to a local hospital. Lumsden was a CIS posterboy several years ago and nearly made the Seattle Seahawks of the NFL after his career at Mcmaster. He spent the last 2 seasons playing in Hamilton and became the symbol of all the dissapointment fans feel in Hamilton, as he was ravished with injuries…….Speaking of horrible games, last night’s contest between Toronto and Hamilton featured two teams that do not look good at all. Toronto prevailed 30-17. Looks like it will be Montreal again in the East and 4 great teams battling it out in the west.

Holy Dieter Brock! The CFL is Back!
https://haligonia.ca/holy-dieter-brock-the-cfl-is-back-3317/