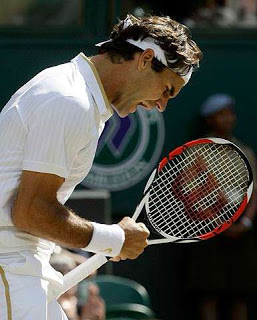 Yesterday was an annual tradition at the Mclean household, as it is in homes across the planet.
It was breakfast at Wimbledon, and in what has become another annual tradition, it featured Roger Federer.
It was not a re-match of last year’s epic final with Rafael Nadal, Nadal missed the tournament due to a knee injury. No yesterday we welcomed back an old friend to the grass courts in London, American Andy Roddick, the new and improved Andy Roddick so were told. Although many sports writers had given Roddick a punchers chance of keeping Roger Federer from winning his 15th grand slam title, Roddick did push the French Open champion to 5 sets, including a 30 game masterpiece, culminating with Federer’s first break of the day to give the Fed his record breaking grand slam championship.
Roddick did show a great deal of improvement in his game and gained a lot of respect with his gritty effort, but in the end, the storyline of the day was focused on the champion.
Roger Federer: The greatest tennis player of all time.
How did he get there?
Well on this day he served up 50 aces.
That’s not a misprint.
50 aces!
Many of them at the most pivotal of times, in the first several sets when it appeared that Roddick just might have Federer on the ropes. Then when the 5th set went to extra games, Federer would string together 2 or 3 aces in a row with uncanny pinpoint control. As the match turned 4 hours long and Federer cruised through his service games, Roddick’s service began to fade a touch as he desperately held on against a determined Federer. It was just a matter of time, and as the shadows slowly crept over the Main Court at Wimbledon, they seemed to be taking the shape of a starving Federer, about to swallow up Roddick, his latest victim.
When it was done, the acclamations began. As Pete Sampras watched from the front row, Federer was crowned Wimbledon champion and anointed as the greatest player in history. Could anyone argue? I’m sure someone much smarter than I could raise some interesting debate points. But I’m happy and content to join the masses in feeling content that Federer is the man.
How can you not like this guy?
Federer has the broadest skill set of any player to ever compete on tour. He hits more shots better than anyone else and at the most critical of times. What’s more, he knows exactly when to use each one.
His physical fitness is superior to every other player on tour. It’s enough that he has more skill, but he’s also in better shape. That advanced conditioning was well on display yesterday as he danced around backhands and ran down balls at the net the entire match, while Roddick’s slow feet began to fail him in the latter stages.
Federer loves tennis. I’m sure they all love tennis, otherwise they would not be playing at that level. But Federer really, really, loves Tennis. Furthermore he loves to compete. He’s determined to win every match he plays. When he lost to Nadal in the final of the Australian Open, he literally broke down on the court during the awards ceremony. This guy has heart.
Federer is painfully humble. He is gracious in victory and defeat. Sure he wore a jacket yesterday with an “RF” logo and the number 15 on the back, but he does not think he is bigger than the game, and you could see that he genuinely felt empathy for Roddick’s pain, having beaten him for the 19th time (mind you, Andy still gets to head back to America with his wife; SI swimsuit model Brooklyn Decker).
Finally, Roger seems like a good guy. I don’t know Federer, maybe he is a jerk. But he seems like a nice man. He has a wife, a child on the way, and he is never in the headlines for wrong reasons.
So let the debate begin and awake the ghosts of tennis past; Borg, Sampras, Laver.
I’ll take Roger against any of them. You could throw in Andy Roddick and make Federer play the doubles lines and I’ll still take my chances with the “Fed”.
And if you’re getting tired of hearing about Federer, well the US Open is only about 7 weeks away, and he’s going to win that too.
What will the headline read on that fateful Sunday?

Roger Federer: The Greatest Tennis Player Of All Time.
https://haligonia.ca/roger-federer-the-greatest-tennis-player-of-all-time-3365/