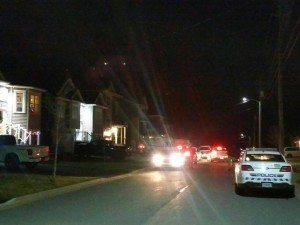 The resident of a home on Hanwell Dr. in Middle Sackville responded to a knock at his door last evening around 9 p.m., and was confronted by two men who forced their way inside. The victim was assaulted and restrained while the men rummaged through the home. Once the suspects left the residence, the victim was able to free himself and ran to a neighbouring residence for help. The victim was not hurt, however a number of items were stolen from his home.

RCMP responded immediately and conducted extensive patrols of the area. A K-9 unit from Halifax Regional Police also searched the area, but the suspects were not located. They are described as male, the first was approximately 5-foot-5, and the second man was taller. Both were wearing ski masks.

The investigation is ongoing,and is being conducted by the Integrated Criminal Investigation Division. Police are asking anyone with information to contact Halifax District RCMP or Halifax Regional Police at 902-490-5020. Should you wish to remain anonymous, you can also contact Nova Scotia Crime Stoppers at 1-800-222-TIPS (8477) or text TIP202 + your message to ‘CRIMES’ (274637) or submit tips by Secure Web Tips atwww.crimestoppers.ns.ca. Calls to Crime Stoppers are not taped or traced and if police make an arrest and lay charges based on a tip, callers qualify for a cash award.