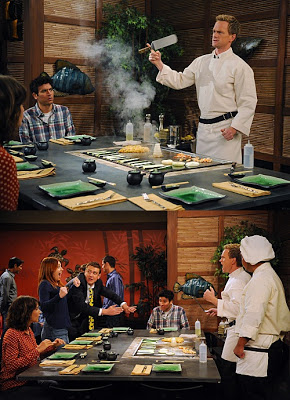 Monday night’s episode of How I Met Your Mother jumped back and forth between two storylines – Ted retelling the story of his encounter with Victoria, and Barney making a bet with Marshall/Lily. We’ll start with the heavy stuff.

I loved the juxtaposition of Ted and Robin explaining what happened when Victoria showed up, each of them imagining themselves as having been much suaver than they actually were. Ted accompanied Victoria back to her bakery and offered to “do her dishes” – nope, not an opportunity for us to sing the “bang bang bangity bang” song, just a metaphor for cleansing his guilty conscience. He had, after all, cheated on Victoria with Robin.

There was still a spark between Ted and Victoria, but it turned out she was getting married – or getting engaged, rather, since she’d found the ring in boyfriend Klaus’s sock drawer. (Come on, fellas, think of more creative hiding spots.) Ted discovered this was the same Klaus Victoria had been close to (the wordplay in that scene was fantastic) in school and, in fact, she’d only been single for about a day and a half after she and Ted broke up.

Um, Ted? You cheated on her. I don’t care if only five minutes went by, you were broken up and she has nothing to feel guilty about. Except now she does, because she kissed Ted. She should feel a little bit guilty about that. But in the end, Victoria got on a bus headed for the Hamptons and a romantic proposal from Klaus – but not before offering some parting advice. This, Ted didn’t share with his friends. Victoria thought that Robin was the reason none of Ted’s relationships have worked out.

Really? How do we feel about this, people? Personally, I think the whole Ted-Robin-Barney love triangle is a little been there, done that. I don’t necessarily think Victoria meant Robin and Ted belong together, but I think she meant Ted can’t find “The One” while his ex-girlfriend is still so involved in his life. But there isn’t really a show without that relationship. I’m not sure what should or will come of this.

Meanwhile, the bet Barney made with Marshall and Lily was so elaborate and hilarious, it was a good foil for Ted’s more serious storyline. I couldn’t believe the lengths Barney went to to put all the pieces into place. If Barney completed the proposed task (the same tricks as the chef at the teppanyaki restaurant they were at) he got to touch AND squeeze Lily’s big pregnancy boobs. If he lost, he’d have to wear Marshall’s ugly duck tie for a whole year. Seems like an uneven bet to me – I mean, a YEAR? A month would be way more reasonable. But hey, maybe I’m underestimating the appeal of Lily’s breasts. Barney almost won, but in a stroke of genius Lily distracted him by flashing him. Well played, but now we have to see Barney in that awful tie all season? #lame #fugly #stinsonusedtorockbutsucksnow

What did you guys think of “Ducky Tie”? Personally, I really liked it. So far, I think this season is off to a pretty good start. Here are a few quotes and moments from the episode that I particularly liked:

How I Met Your Mother: Ducks in a Row
https://haligonia.ca/how-i-met-your-mother-ducks-in-a-row-44206/