Home / Life / Couchtime With Jill / How I Met Your Mother: Putting the “fun” in funeral 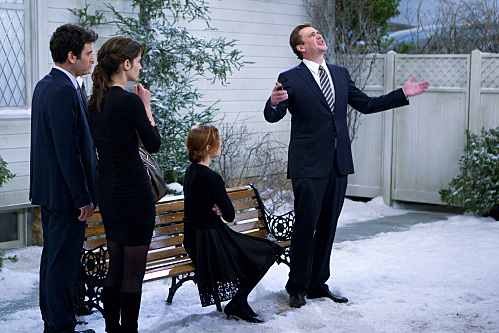 How I Met Your Mother: Putting the “fun” in funeral 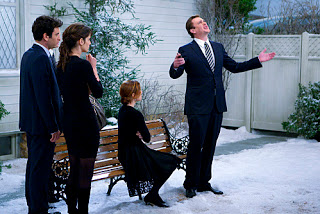 I’m relieved to say that last night’s episode of How I Met Your Mother (the first since the startling death of Marshall’s dad) perfectly balanced heart and humor. The whole episode took place at Marshall’s dad’s funeral (or wake, or memorial service, or whatever) and focused on the gang’s attempt to be there for Marshall, and Marshall’s struggle to come to terms with his dad’s death and what their final words to each other were. Most of the episode wasn’t funny in a “hahaha” way, but it was funny in an “I’m sad but that made me smile” kind of way – which was exactly what they needed to do.

When you’re the friend of someone who’s lost a loved one, it’s hard to figure out how to act. No one really knows how to behave because they know there’s nothing they can really do to get their friend through that pain. They can only try their best. So that’s where the comedy came from – Lily, Robin, Ted and Barney trying to figure out how to be there for Marshall. Robin was “vice girl” carrying around a Mary Poppins bag of adult goodies like booze, pills and phone chargers. Lily found a role as an outlet for Marshall’s mom’s anger. Every time Judy got mad at Lily, she’d sleep or eat – things she hadn’t done for days. Ted and Barney tried to make Marshall live with YouTube clips and live performances of someone getting hit in the crotch. Kind of tactless, but they meant well.

Meanwhile, Marshall was trying to come to terms with his dad’s death while also dealing with the reality of funeral arrangements. The minister doing the service was a hilariously short (played by Danny Strong of Gilmore Girls and Mad Men) childhood bully. Marshall’s mom and brothers all remembered meaningful last words they’d exchanged with his dad, but Marshall’s memories got progressively worse. First he remembered denying his father the last pork chop and his dad saying “Plane food is ass!”. Then he remembered his dad needing an umbrella as he waited for a cab and shouting that the Koreans across the hall would probably have one. Then he remembered going down to the sidewalk with the umbrella, and receiving some parting advice from his dad – “Rent Crocodile Dundee 3. I caught it on cable last night and it totally holds up.”

As Marshall was trying to accept that those were the last words he’d ever hear from his dad, he discovered that his dad had also left him a voicemail after their visit. After some agonizing deliberations, Marshall finally listened to it. Finding out it was a pocket dial was heartbreaking, but after five minutes of the sound of rustling fabric his dad came on the line. (Only in the world of TV would someone not delete that after the first two minutes.) He said they had a great visit. He said he loved Marshall. And he said to please look for his foot cream because his fungus thing was acting up.

The voicemail was exactly like the episode itself – the perfect balance of heart and humor. The added touch that Marshall used Crocodile Dundee as his last words at the funeral home, and the shots of the whole gang calling their dads because they realized their most recent words weren’t so great perfectly matched the tone. And it provided the perfect catalyst for Barney to realize he’s ready to meet his dad. (Who will be played by John Lithgow? Thoughts? I expected someone more suave and can’t see him as anyone other than Trinity, but we’ll see.)

I thought HIMYM knocked it out of the park, and hopefully they continue to do so. In my review two weeks ago I said I thought this was exactly what the show needed to get back on track, and this episode has reinforced that belief. What do you think, did they make it work?

Here are a few funny lines from “Last Words”: