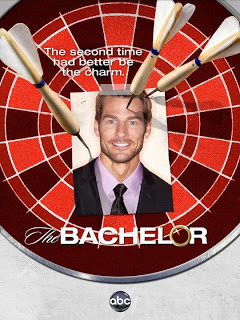 Man. Good thing I’m not competing on The Bachelor right now, because I’ve had way too easy a life to receive a rose. If you want to compete with these girls you’d have to shove some onions into your purse to rub on your eyes when Brad isn’t looking and try to pass off the plot from My Sister’s Keeper as your own life. Tears were flowing on the third episode of The Bachelor this week, and Michelle wandered farther and father into Crazytown.

Kiss and a Rose

Ashley S., the adorable Southern nanny “from” New York got the first one-on-one date this week – and what a date it was. Man, these Bachelor producers sure do know how to convince me that Brad Womack is there for the “right reasons”. Planning dates that include filming commercials, recording music and shooting action movies do not in any way make me wonder if Brad will go the Jake Pavelka route and attempt a career as a “celebrity”. Not at all.


Yes. For their date, Brad and Ashley S. went to a recording studio and laid down a cover of Seal’s “Kiss From A Rose”. Are you kidding me, Chris Harrison? (Yes, I’m blaming Harrison. No, I don’t know why.) Who records music on their first date? Who records music on any date? It didn’t help that neither Brad or Ashley could sing, and neither person seemed like they even really wanted to be there. Will that traumatic experience count as one of those major bonding dates, like Jake and Vienna bungee jumping or Ali and Roberto walking across a high wire? Because personally, I’d totally go skydiving or something before I sang in front of a guy on our first date. 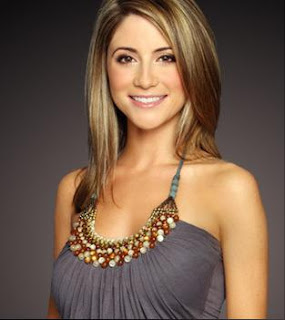 Ashley S. set the tone for the episode when she got super emotional because “Kiss From A Rose” was her and her dad’s favorite song, you know, back when he was alive. Yep, that’s right. They had them sing her dead father’s favorite song. And then they surprised them with a private concert from Seal! Mr. Heidi Klum, why have you sunk so low? You’re too talented for this crap.

During their romantic rooftop dinner, Ashley poured her heart out to Brad. I’m not making fun – it was a very sad story and it’s not something I can imagine personally going through. But at least one girl told Brad a heartbreaking, tear-filled life story on Every. Single. Date. Anyway, it does seem like Brad and Ashley could have a connection, as long as she doesn’t get stuck with the Friend Label, and as long as he stops pronouncing her name “Assley”. She’s sweet, Southern, pretty and seems down-to-earth. Basically, everything Manic Michelle is not. But more on her later. Brad gave Ashley the rose, which seems to be a sure thing if you break out the waterworks.

Time for Ludicrous Date #2! This time, Brad was taking a big group of ladies on a classic romantic date…filming an action movie! The best part of this was that yet again, Manic Michelle had to sit through a group date and watch Brad partake in a scripted kiss with another girl. Michelle reacted like a 14 year old girl. Of the other girls she said “I’m not gonna lie, I hate them.” She wished that one of the pretend ninjas would carry the other women off to the desert to die. She hid behind her hair and watched Brad kiss another girl. She once again described what her first kiss with Brad would be like in disturbing detail, imaginary fireworks included. And she got super jealous when she didn’t receive the rose. 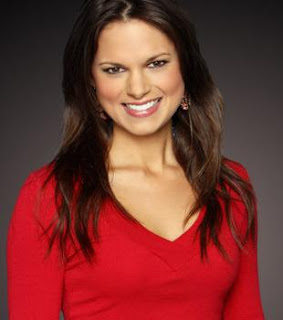 Even though he kissed Michelle during their alone time (I didn’t see any fireworks though, did you?) Brad made more of a connection with Shawntel, the funeral director. You know why? What’s that you said? She told a sad lief story and cried her eyes out? Ding ding ding ding ding ding ding! Correct!

Not only did Shawntel grow up with a deadbeat dad, but after 15 years without communication she tried to contact him and found out that he had recently passed away. Again, I’m sorry. These are awful stories that I wouldn’t wish on anyone, not even Michelle. But is there anyone in that house who doesn’t have a dead father or boyfriend? And while Brad was presenting the rose to a puffy-faced Shawntel (her words, not mine) Emily was the only one not crying back at Casa Chlamydia as she shared her tragic tale with a few of the girls. Oh yeah, plus she was getting the last one-on-one date for the week, so soon she’d be dumping that on Brad as well.

Can we pretend that airplanes in the night sky are like shooting stars?

While I get that Emily didn’t want to drop her whole sad story on Brad the first night she met him, couldn’t she have told him that she had a daughter and then later divulged the rest of the information? Instead, she went on her first date with him with a giant burden on her shoulders. And it was painfully obvious. 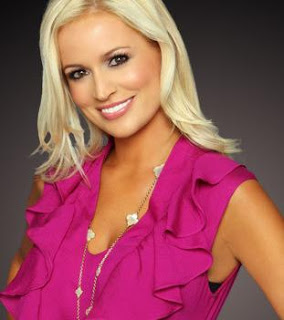 First, the two were jetting off for their romantic vineyard date in a private plane. Which sounds nice except that, you know, Emily was afraid of it crashing. Then all afternoon Emily dodged Brad’s “getting to know you” questions with generic answers and a swift “How about you?” When Brad asked why the one serious relationship she’d had didn’t work out, Emily froze like a deer in headlights, and I wondered if she’d ever be able to tell him.

Luckily, she did. Over dinner Emily said there was an elephant in the room (words my mom uttered right before Emily said them, leading to one of several “Called it!” high-fives of the evening) and finally told Brad the Sad Single Mom story. It’s obviously still very difficult for Emily to talk about – she didn’t sob, but seemed to be in actual physical pain as she got the words out. Brad reacted well, though, and gracefully steered the conversation towards her daughter. Despite the rocky start the date was a success and Emily got a rose.

Before Brad could go sip champagne with all his women (the booze is almost the only thing that separates this show from polygamy) he had to discuss his most recent dates with his therapist. Are they for reals? For the rest of his life, he’s going to discuss every person detail, every feeling, every insecurity with that dude? Barf. I can’t think of anything more unattractive.

Cocktail party time! Or for Michelle, time to act even crazier! First she ambushed Brad as he crossed the room, begging “Can I have you?” He shut her down and offered up a hug instead, but that didn’t stop her – she had to interrupt his alone time with another girl. Wandering up as she touched her hair she said “Just when you’re done…”, reminded me so much of Kristen Wiig’s SNL character Penelope that I must see them to a Bachelor skit. Seriously, I almost expected Michelle to start murmuring about how she’d already been offered five roses, and that her roses were totally better than the other roses, and she gets roses all the time, and… 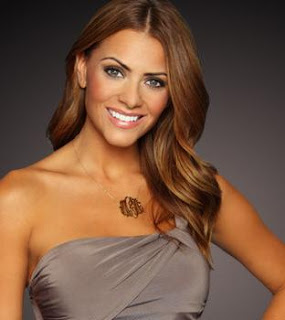 As soon as Michelle got her one-on-one time with Brad, she declared “You and I are kind of in a fight. Like, this is our first fight,” apparently because he’d dared to kiss another girl. Then she demanded “Explain yourself!” Um, what? Does she know what show she’s on? What explanation does she need other than “We’re on The Bachelor, this is how it works.” This isn’t real life, sweetheart! Exclusivity doesn’t exist on reality TV dating shows!

Honestly, I don’t know why Brad is keeping this chick around. She’s not that hot. And she’s saying everything that most guys despise, like that she needs to “dissect” him, that he has “walls up”, and that they’re in a fight for no good reason. Maybe it’s because she reminds him of his therapist. 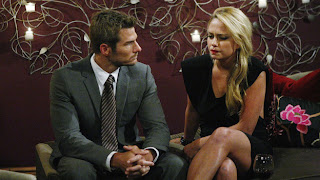 Turns out that hearing Emily’s sad story hit Madison harder than it hit Brad. Yeah, all the girls Emily confided in were in tears as she told her woeful tale. But it stayed with Madison and made her question her whole reason for being there. She even took off her fangs (thank god they come out, she would have really regretted that in another ten years months when Twilight isn’t popular anymore) to have her super serious conversation with Brad. She said she shouldn’t stick around, he begged her to stay. But let’s be real. Wasn’t Madison’s talk about having walls up and not wanting to take the place of any other girl just code for “I’m not as into this guy as the rest of these women are”? or possibly “I came here to help my modeling career and only recently found my conscience”? Because that’s what it sounded like. Someone needs to buy that dude a copy of He’s Just Not That Into You.

Madison stayed for about the first 30 seconds of the rose ceremony and then bailed. With Madison gone, Brad only had to cut loose two ladies – two women I’d never heard of named Kimberly and Sarah P. Kimberly won the Bitter Much? award of the night, and Sarah P. won the Most In Need of a Good Waterproof Mascara award of the night. Oh, and while we’re giving out awards – I’d like to present Chantal O. with an award for Wearing More Blush Than a Clown, and declare a three-way tie between Britt, Lindsay and Lisa M. for Most Silently Adorable.

We’re three weeks in and not much has changed – I still hate Michelle, I still think the dates are ridiculous, and I still look at half the women and say “Who are you?” But of course, I’ll still keep watching. How can I not? Next week my dreams will come true – Michelle will wake up with a black eye!