First of all, one thousand THANK-YOUs to all of you beautiful people for stepping up and leaving me a comment on my last post when I needed it 😉 This is not the first time I have reached out in need of some support and you never cease to be there for me. With your support, I have something to tell yas!

Lynn and I are MORE than a little excited. We have been hinting a little bit that we had “details” about how we have planned to throw ourselves into the much needed accountability plan that we have felt we were lacking. At one point in time, we felt that our blogs were enough to keep us accountable, but since then I think we have gotten used to supporting each other no matter what, which is incredible because we have developed some pretty special REAL friendships through this process and through these blogs over the last FOUR years (almost 4!) and that is something that is definitely going to push us to the finish line! But we felt that we need a little extra “official” push to renew our focus, our motivation and to keep it fresh: 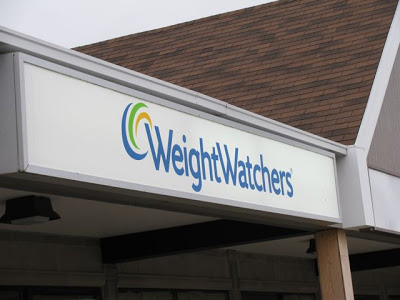 We were both pretty nervous! It was kind of silly considering how far we have come together online over these past few years, but we walked into our meeting as newbies, unsure of what the meetings would bring for us. I made a decision before walking in there that I was going to keep an open mind, get what I needed out of it and just plain be positive and supportive to everyone else too! 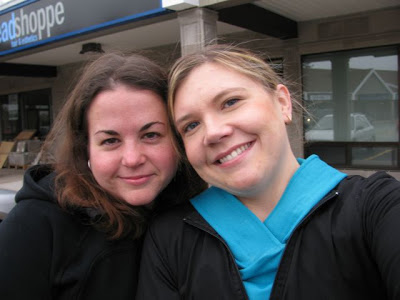 And it is official!

What a better day than on Halloween?! I don’t exactly know what the significance of that is, but it’s exciting anyway! I suppose I can always think of Halloween as a day of strength and not a day of worrying about Halloween candy 😉 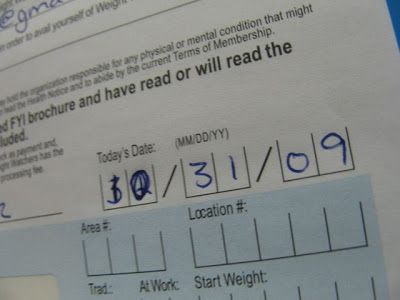 And this was not the fun part. I know that this is not my “real” weight, because I have felt like a helium balloon the past few days, but that is what the scale said and that is what it is! Actually, she recorded me at 190.6 because it kept flip flopping back and forth. Ugh! I CANNOT believe I am seeing that number! Buh Bye!!!!!!!!!!!!!!! 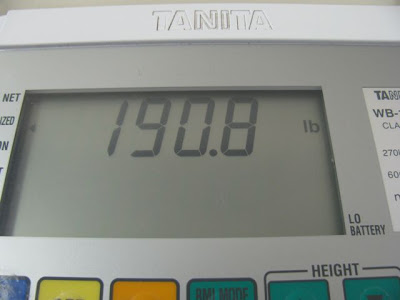 And then Lynn and I took a seat and waited for the meeting to begin. There was way more people than we expected and from what they have told us there was 60 people at the earlier meeting too!

Immediately we noticed the people chatting about food and processed treats etc. I wasn’t sure how things were going to go, but I decided I wasn’t going to judge the meetings based on the other members, but I would decide on how well I related to the leader and the messages that they gave us. I have never really had anyone lead ME before. I’ve always been the one that people turned TO for advice. I love this shift in focus! 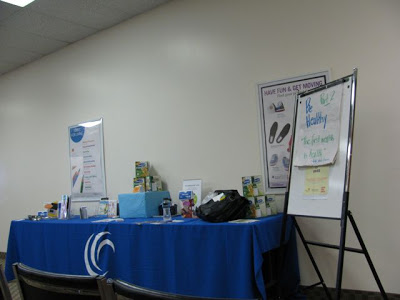 Ultimately, I was supremely impressed with our leader and she did an excellent job at listening to the other members, regardless of where they were in their progress and regardless of what they said and her underlying message continued to be: 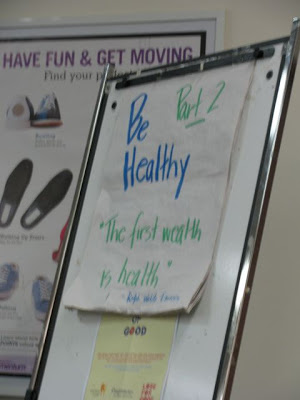 She pushed the idea of focusing your POINTS on good whole foods and drinking water as much as possible rather than diet drinks and other forms of liquid that are now considered acceptable under the plan to “count” as your water. One person piped up about how much Crystal Light has helped her drink her water and while she accepted her input and encouraged it, she followed it with reiterating the importance of just water! I liked her a lot and I think this is going to work out really well!

Then Lynn and I ate our late breakfast at Starbucks and fueled ourselves for a little Santa Shuffle run training and we hit the trails in Clayton Park for a light run which was a little less than 5 kms. We each had an apple, piece of cheese, half of an Amazing Grass Whole Food Bar and I had some homemade greek yogurt with some raspberries. Perfect.

We hit the trails, gabbed and chatted as we explored some of the trails around Clayton Park and packed it in! It’s Halloween night and I had to get the treats for the kiddies! I NEVER buy them before Halloween because, well, you know why 😉

On my way home, I had forgotten all about the number of my first WI and I feel GREAT!! I feel motivated, focused and EXCITED!!!

So my challenge to YOU is that if you were “thinking” about maybe joining the WW Meetings and haven’t, you should JOIN WITH US!! Even if you don’t live here, if you join in your area, we can keep up with each other online and post about our meetings. I never actually read much about meetings around here, so you’ll be hearing lots from me!

How's THIS For Re-Commitment!! (Video)
https://haligonia.ca/hows-this-for-re-commitment-video-7390/