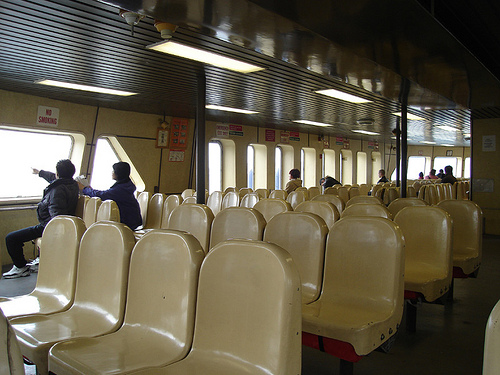 HRM News Release:
(Thursday, February 9, 2012) – HRM's bargaining team returned to the table Wednesday with representatives for the Amalgamated Transit Union (ATU) Local 508 and the conciliator, but the union would not budge on its $8.8 million proposal. Talks reached an impasse this morning.
“Our residents are anxious to see buses and ferries back in service and believe an affordable resolution to this work stoppage should be reached,” said Mayor Peter Kelly. “Residents are the ones negatively impacted and feeling the brunt of this continued work stoppage.”
In accordance with the revised mandate provided by Council yesterday, HRM today tabled a new proposal that includes a lump sum payment equivalent to 2.5 per cent of wages in the first year, a 3 per cent wage increase in the second year, and a 2 per cent wage increase in the third year. The wage increases would be offset by efficiencies gained through an improved scheduling system—known as ‘rostering’—that would reduce excessive overtime costs by packaging work in week-long blocks, as well as through wage restructuring for incoming transit operators.
The latest union proposal contains wage increases of 2.5 percent, 3 percent, 2.75 percent,, and no changes to the current scheduling practice, which allows transit operators to choose each shift they work in a week and leads to 80-100 shifts per week that need to be filled largely with overtime. Wage restructuring for new operators was also rejected.
"Getting back to the table and making real progress towards a solution will only happen if ATU is sincerely willing to work with HRM to find ways to be more efficient," said Metro Transit Director Eddie Robar. “Make no mistake: contrary to ATU's claims, it is about the money."
With the savings from rostering and stepped-in wage increases for new transit operators, HRM's offer is valued at $2.1 million –  $6.7 million less than the proposal tabled by the ATU.
“Residents realize that there are only three ways to recover transit costs: operational efficiencies, the fare box, and on the backs of taxpayers. HRM cannot agree to terms that would further unduly increase the tax burden of residents,” said Mayor Kelly. “HRM taxpayers already pay more than 50 percent of the current transit costs, which represents an annual investment of more than $36 million.”
Metro Transit customers are advised to check the Metro Transit portion of the HRM website at www.halifax.ca/metrotransit for updated information. Information will also be shared by @hfxtransit on Twitter and through the HRM call centre at 490-4000.
Metro Transit is the primary transportation service provider in HRM and the largest transit system in Atlantic Canada, comprised of over 300 buses and three ferries. In addition to its conventional fixed route system with 61 routes, including the premium MetroLink and MetroX services, it operates three Community Transit routes, the harbour ferry service and the door-to-door Access-A-Bus service for persons with disabilities.

HRM On Transit Strike: "It Is All About Money"
https://haligonia.ca/hrm-on-transit-strike-qit-is-all-about-moneyq-54069/