A series of low pressure systems will pass through the region over the next four days.  Each subsequent system will track a bit further south.

There will be a variety of precipitation types and some messy conditions.

Today: a trough of low pressure will track along the St. Lawrence Valley.  There is some patchy freezing rain in PEI, eastern sections of New Brunswick, and north and east Nova Scotia this morning.  Take care on the roads.  Otherwise the rain will taper to drizzle this morning as winds shift to the Southwest and temperatures rise. 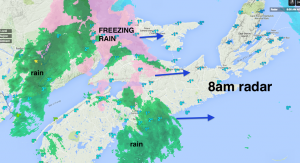 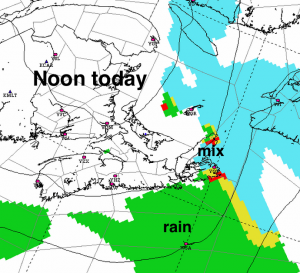 Rainfall amounts will be just a few mm today. However, some melting of the large snowpacks will result in pooling of water this morning; and some poorly drained roads or basements may have some minor flooding.

Saturday: a rather well developed low pressure system will track through the Bay of Fundy into the Gulf of St. Lawrence.  Note that the precipitation will start as freezing rain in many areas Saturday morning; so be careful early on. 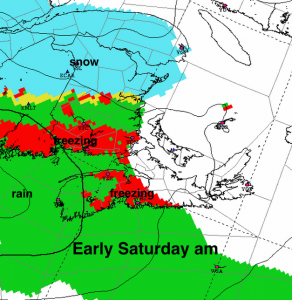 Otherwise, expect rain along and to the south of the track, and snow to the north. 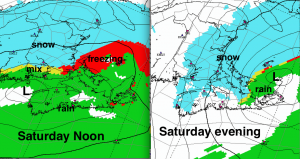 The heaviest snow is expected over central New Brunswick, with amounts of 15 to 20cm likely.  A heavy snowfall warning may be issued this afternoon.

Further south, heaviest rainfalls will range from 10-20mm along the Atlantic Coast of Nova Scotia; raising the possibility of localized flooding.

Note: the warm and moist southwest flow today and Saturday will form some low cloud and fog over Nova Scotia.  Given the fact that the Navigation Aids are damaged on the Southwest oriented runway at Stanfield International Airport, there is a chance of delays  if there is dense fog with visibilities less than 1km today, tonight or Saturday.

Easter Sunday: In the wake of Saturday’s system, the Maritimes will lie in a cold northwest flow. A weak trough of low pressure will slide across Nova Scotia, with some snow likely to develop. Amounts not very high. 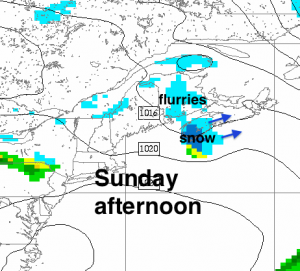 Easter Monday: Aweak low will cross the southern Maritimes, again with a bit of snow most likely over Nova Scotia. Too early for amounts; might be a bit messy. 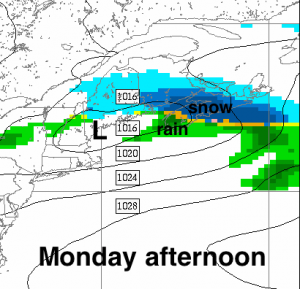 Stay safe and have a nice Easter Weekend, in spite of the mixed bag of weather.