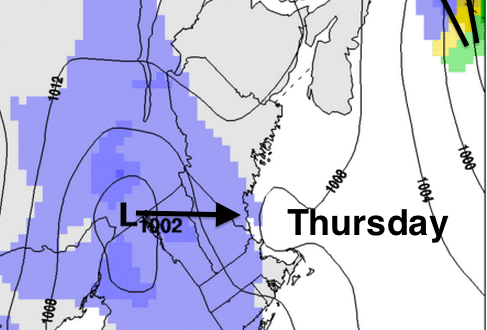 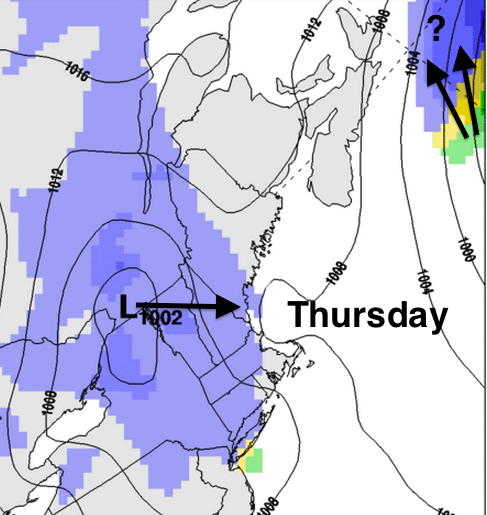 The unseasonably cold air over the Maritimes is keeping the storm track to the south of Nova Scotia.  The system responsible for the heavy snow in Boston is just clipping the Atlantic coast of Nova Scotia with a few cm of snow.

Cape Sable Island, closest to the system, did receive 13cm of snow overnight. 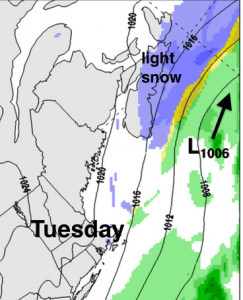 A well developed ocean storm on Thursday may clip eastern Nova Scotia with some snow… too early to determine the exact track of that one.  However, a low pressure system moving offshore into the Gulf of Maine Thursday night does bear watching.  There are indications it may intensify, giving some areas of the Maritimes (especially eastern regions) a significant snowfall. 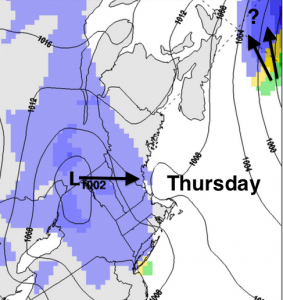 Looking at the ensemble of 40 computer weather models (below), there is consensus for a few cm or less along the Atlantic coast for the system passing south of Nova Scotia tonight and Tuesday.  For Thursday, Halifax might get clipped with a few cm… only one out of the 40 models has higher amounts for Halifax.  Sydney is more likely than anyone else to get impacted by the Thursday event.

If we look at Friday, there is some consensus for at least a 10cm event for central and eastern Nova Scotia and probably Prince Edward Island.  New Brunswick would receive lesser amounts with the current scenario for Friday.

A reminder that ocean storms, where there is less data available, are more prone to forecast error.  Environment Canada will be keeping an eye on these systems, and will issue warnings if and when there is enough certainty of significant snowfalls.

As temperatures turn mild today and Friday, wintry precipitation will not be in most people’s minds.  However, Friday night, as rain spreads southwards across the Maritimes. a cold ridge of high pressure over Quebec will spread cold...

A very intense storm passed across the Maritimes Thursday night 04-05 January 2018.  There was significant media attention associated with this storm, given it’s impact with snow, wind and storm surge along the eastern seaboard of the...