When North Americans think of Irish pubs, too often our only point of reference is the shiny theme pubs swelling with cultural appropriation. But what is an Irish pub really?

I went to a ton of pubs in Ireland, strictly for research, of course! Most were traditional pubs dating back to the Victorian period, but a few were brew pubs and gastropubs.

The pubs in Ireland were not new and shiny. They were well worn with the trials of history, and had an honest and straightforward character. A “pub” is a place to gather with drink, not necessarily with food. In many cases the establishment is separated into a “pub” area and a dining room. Some pubs have “snugs”, which are little private drinking booths, but I generally felt that the seating arrangement was more social than American pubs. You generally have to order your drinks from the bar. Tipping is somewhat discouraged, but not entirely.

You ought to expect a decent whiskey selection. As for beer, Guinness and Smithwicks (pronounced “Smi-dicks”) taps dominate the scene. I tried a few craft beers but I found them to be rather subdued. My favourite craft beer was Galway Hooker Irish Pale Ale but I also quite enjoyed the brews at Rising Sons Brewery, with its large sports screen (biggest in Cork!) and Franciscan Well Brewery, with its heated beer garden and wood fired pizzas.

A couple excellent gastropubs we went to were L. Mulligan Grocer (Dublin) and The Oliver Plunkett (Cork) which is also a live music venue.

Temple Bar is the super touristy bar district in super touristy Dublin – love it or hate it, you’re probably gonna end up at a few pubs here or near. The Temple Bar itself is going to be packed and over-priced. I used this guide to figure out what Dublin pubs to check out.

I paid a lot of attention to the pub food in Ireland to get a general sense of it. There are the usual suspects, of course – nachos, steaks, burgers. There didn’t seem to be as much of an emphasis on appetizers. I’d see chowders, mussels, fish cakes and prawn cocktails. Variations of deep fried brie seemed to be popular. Black pudding appetizers were fairly common, as well as “potted” crab or mackerel.

Oak smoked salmon was prevalent, as well as gin cured smoked salmon. I noticed  a lot of menus had a Smoked Salmon Salad.

Guinness and Oysters, served with soda bread, is a classic combination for an appetizer or a meal.

Irish Stew
– generally made from lamb and potato. 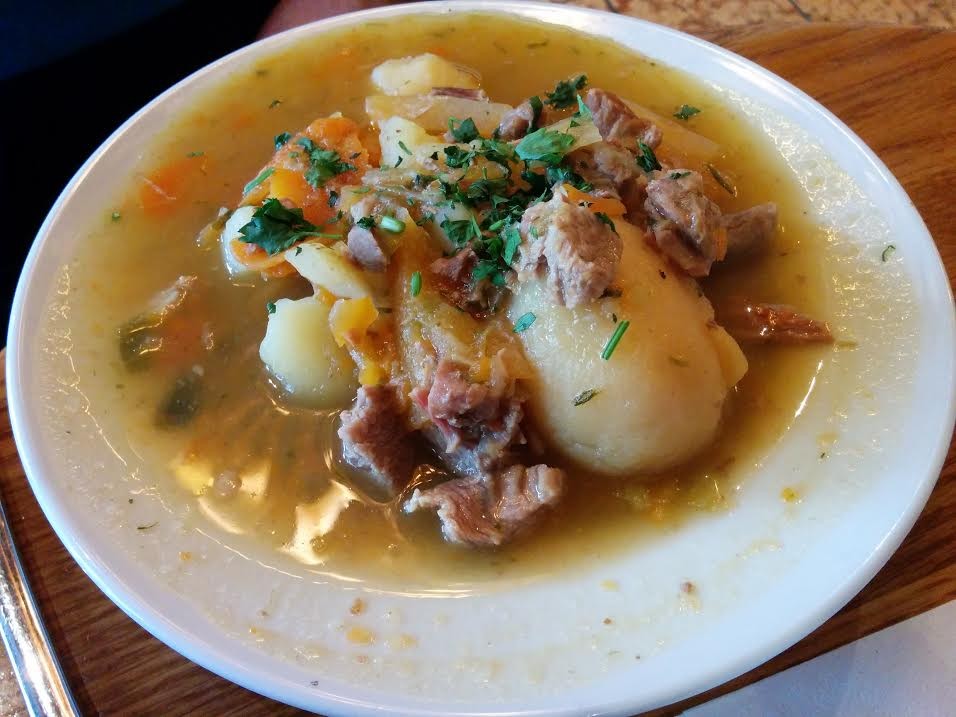 Guinness & Beef Pie
– as well as other meat pies like chicken or venison. 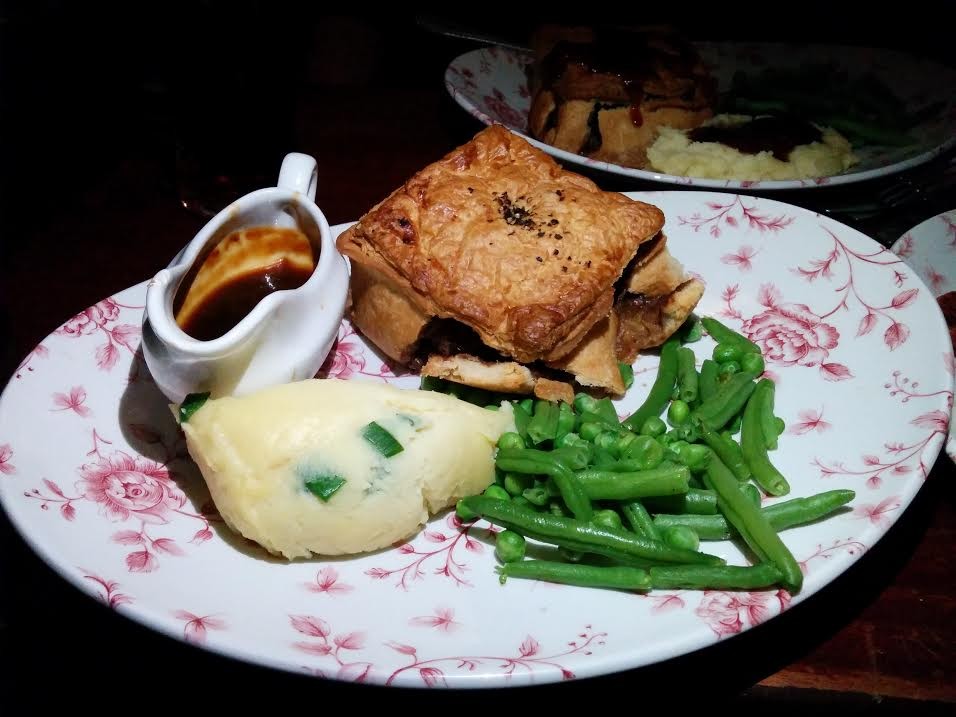 Bacon & Cabbage
– Despite the fact that Ireland was a major producer of corned beef, this was an export and not a native food. (Corned beef & cabbage is an Irish-American food, influenced by Jewish cuisine. This article is quite interesting if you want to nerd out.) What the Irish DO eat is pork, and a traditional pub dish is bacon and cabbage with parsley sauce. This thick cut of salty pork is not what Americans think of as bacon, but that’s what they call it here! 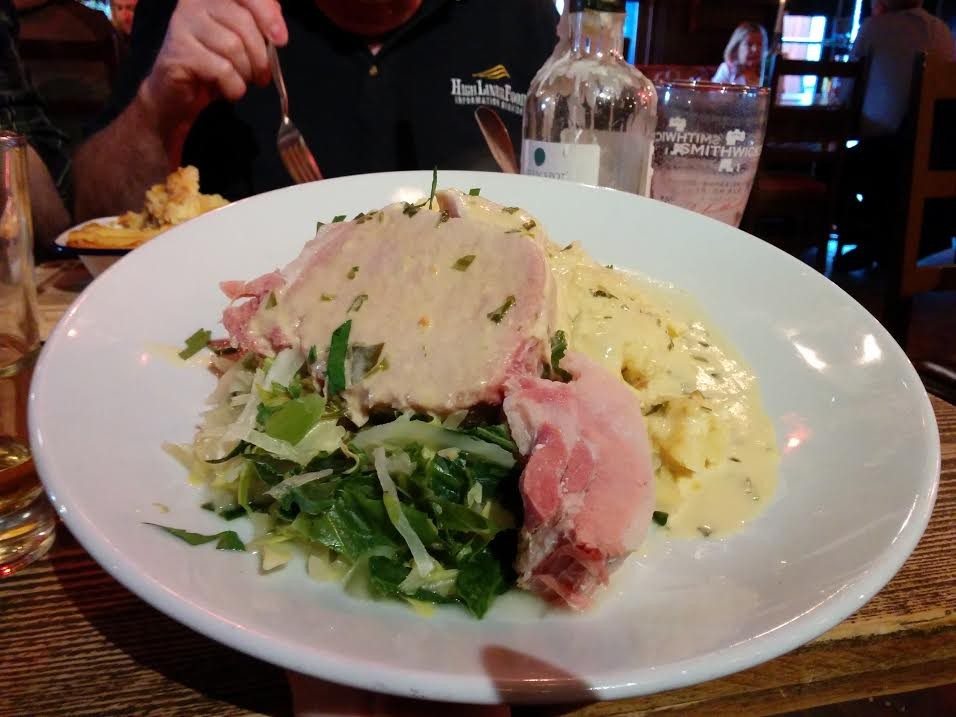 Limerick Ham and Gammon
– These are other common types of pork. Limerick ham is a method of preparing a joint of bacon. Gammon is cured hind leg of pork. 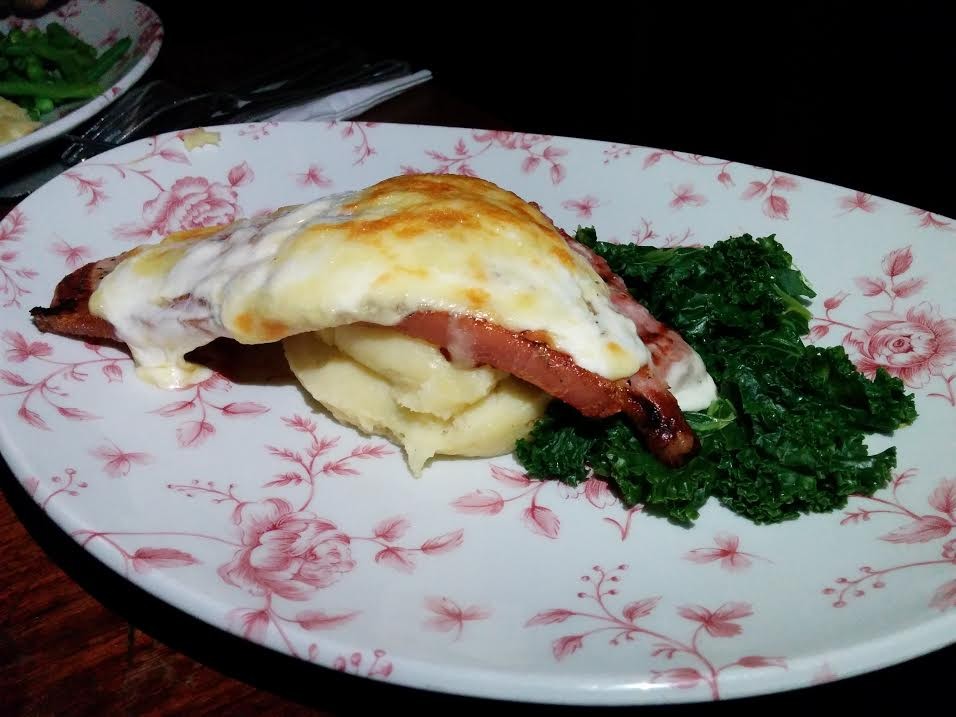 Shepherd’s Pie
– these were made with either lamb or beef. 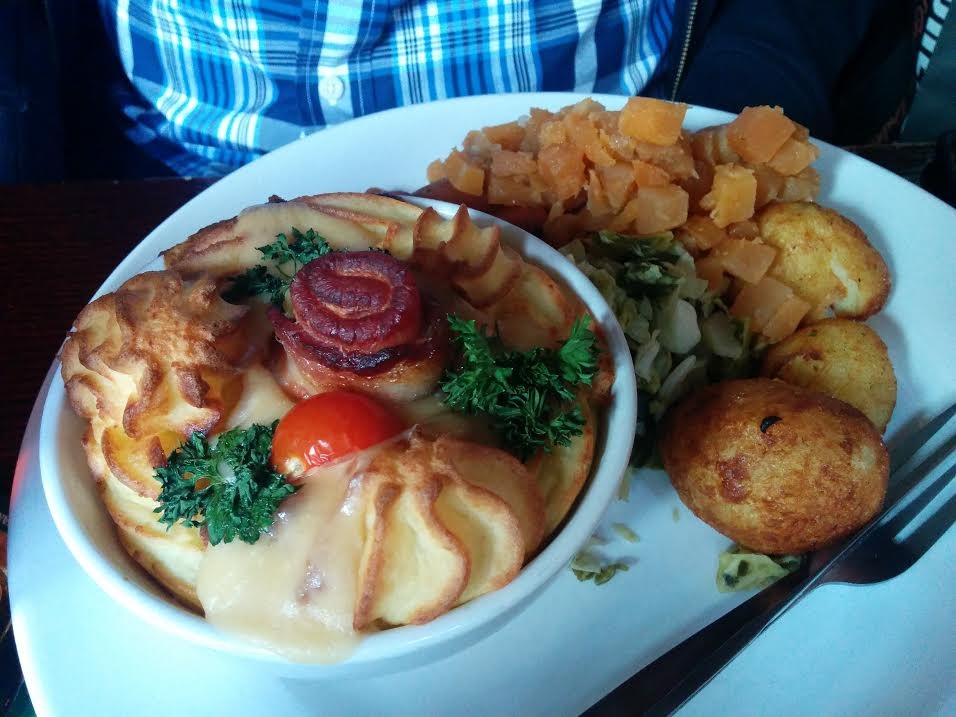 Goujons: these are what chicken or fish tenders are called. 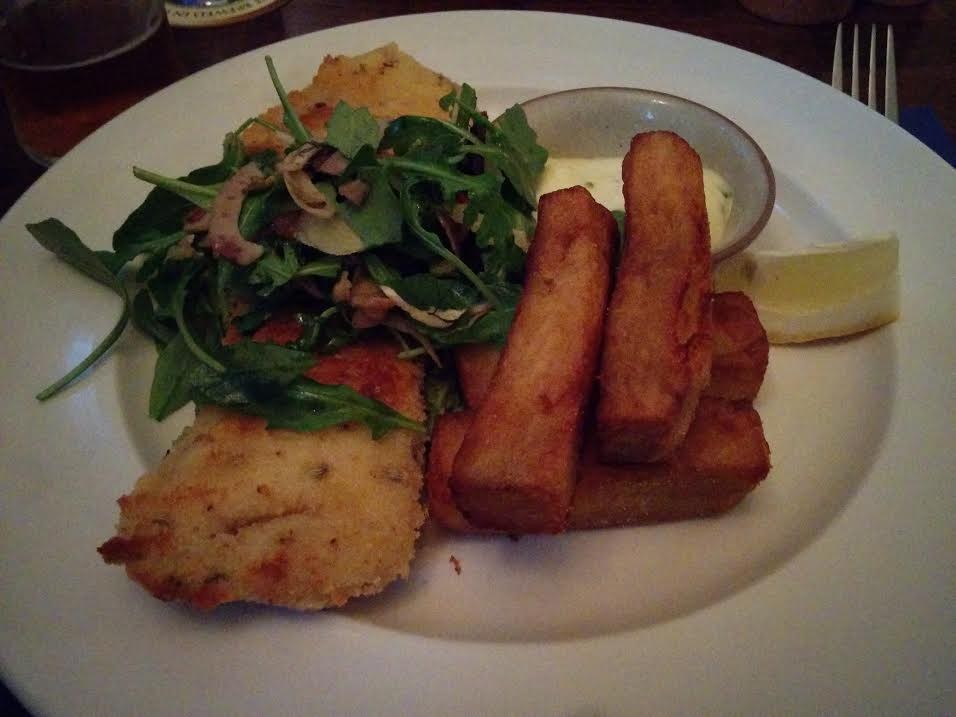 Curry – One of my regrets is not having a good pub curry when I was in Ireland. This is a popular pub food in Ireland and the UK that arose from the colonization of India.

Mixed Grill – I guess every pub in the 70’s would have had a mixed grill on their menu. It’s got lamb chops, lamb kidneys, bacon, sausages, gammon steaks, beef steaks, chicken breast, black & white pudding, fried egg, grilled tomato, peas & carrots, fries … whatever! It’s kind of a free for all that can infringe on Irish breakfast territory. Suffice to say, you get to eat ALL THE MEAT. 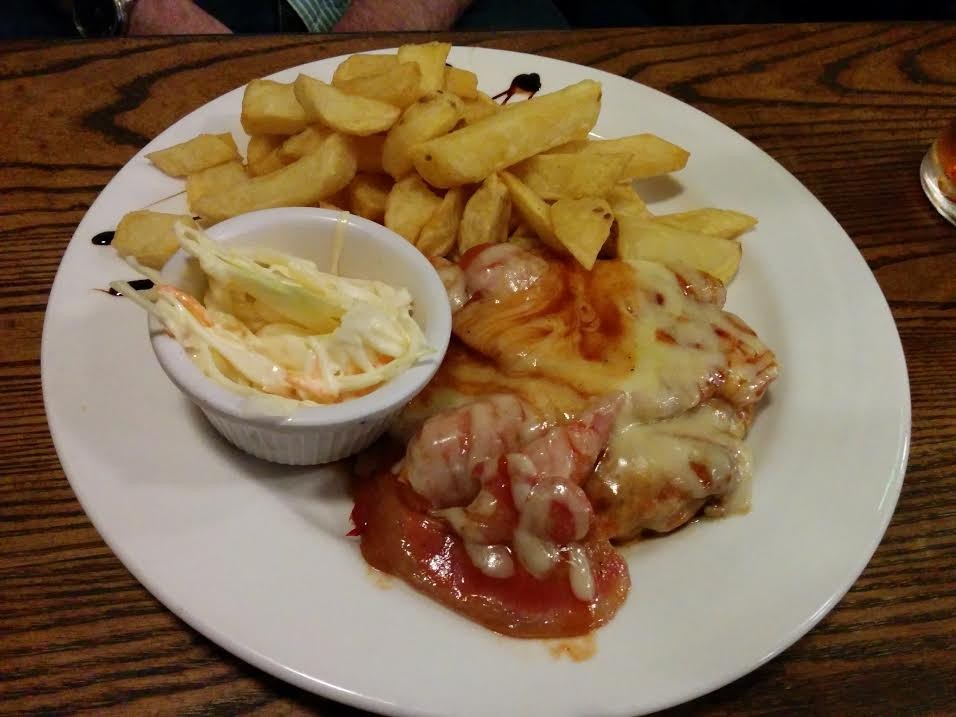 Hunter’s Chicken
– This is another old school menu item. It’s chicken wrapped in bacon, smothered in BBQ sauce and cheese. Looks like a bad decision to me. Hey! – I didn’t order it!

Chicken Maryland
– As if Hunters Chicken isn’t weird enough, Chicken Maryland is a breaded chicken breast served with corn fritters and fried banana. I asked a server what it was and he couldn’t tell me how it was different from chicken kiev, but I walked passed a pizza place and saw a description of a Chicken Maryland pizza fully equipped with sweet corn and bananas and I was like “Whuuuut?!” This is actually a popular adaptation in the UK for Escoffier’s “Chicken à la Maryland”.

As for desserts, profiteroles (cream-filled pastries) seemed to be ever-present. Bread & Butter Pudding and Sticky Toffee Pudding were common – I had a decent version of the latter at the Crown Liquor Saloon. Trifle is also something I saw on dessert menues that I generally don’t see in Canada. 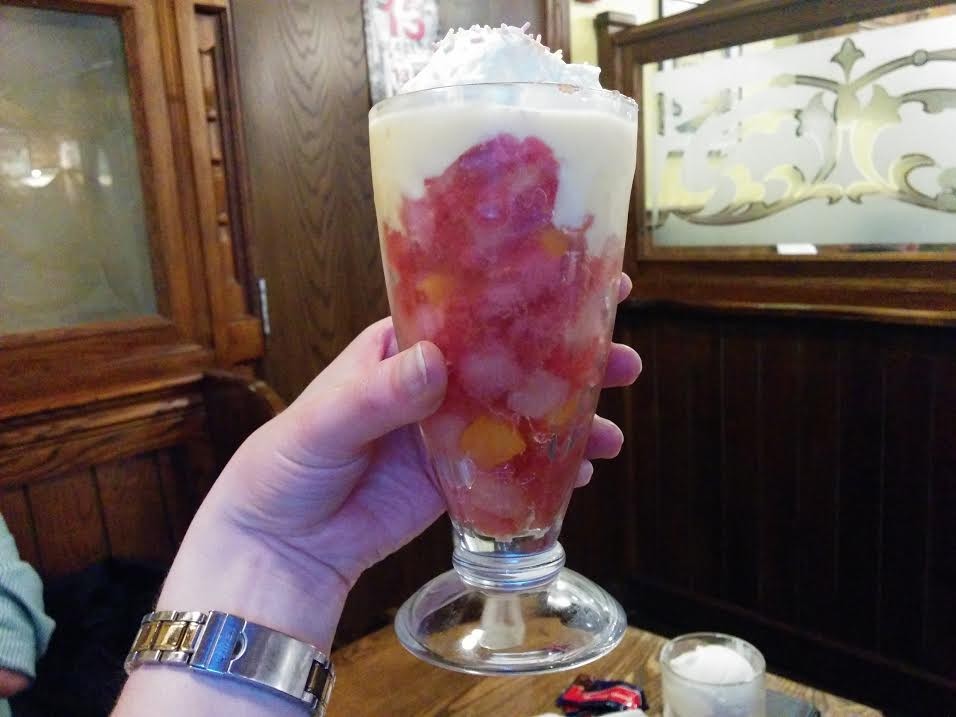 As for the best approximation of an Irish pub in Halifax – The Old Triangle does a pretty good job.

Next up – Irish Street Food!