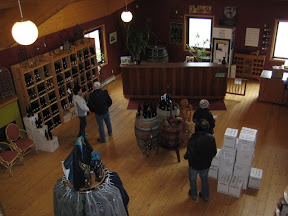 I love wine. That’s why, when my sister suggested that we take a trip to Malagash to visit Jost Vineyards, I got excited. I’ve heard great things about visiting this winery, especially in the summer when they let you stomp grapes in a barrel. In April though, this visit would be purely sampling wine and visiting their showroom and gift shop. Fine by me.

One time I asked a manager of a wine store in Halifax did he have a wine that was his personal favourite. His answer amazed me. He said, “Any wine made here in Nova Scotia.” When I asked why? He said, “Because I can taste the soil, I can taste Nova Scotia.” Neat response eh? 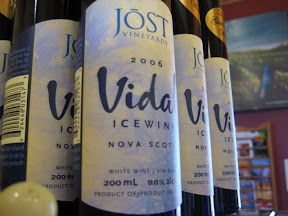 Back to Jost, since moving to Nova Scotia from Germany in 1970, Hans Jost and his family have been gaining a lot of success. In 1999, Jost’s Vidal Icewine received accolades at the All-Canadian Wine Championships as Canada’s Wine of the Year. Jost Vineyards was the first winner outside of Ontario and British Columbia since the competition began 20 years earlier. Also, in 1999, the Vidal Icewine won the Andy Brandt Trophy for Best Dessert Wine.

When traveling around Nova Scotia, stop into one of the many wineries and have a taste of Nova Scotia.