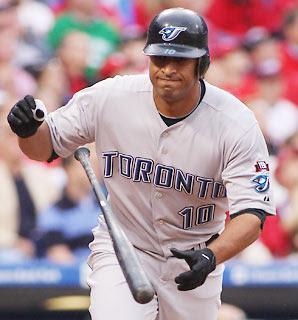 This is a couple excerpts from a great article from CNNSI on bad contracts in baseball. Specifically, JP Ricciardi and his outrageous contract given to Vernon Wells.
Make sure you tune in tomorrow to Haligonia Sports, live at noon, especially if you’re a fan of the SMU Huskies. I’ll have basketball star Mark Mclaughlin and new Athletics Director Steve Sarty. Haligonia Sports this friday at noon!
I don’t want this to sound rude … but I have never understood Toronto Blue Jays general manager J.P. Ricciardi. I mean that sincerely. I just don’t understand. I have friends all around the game who will tell me what a bright guy J.P. is, what a good baseball man he is, what a grounded person he is, what a nice guy he is, and so on. And I have no reason to doubt them except this: I have absolutely no idea what they are talking about.
And no, this isn’t about the incredibly dumb things Ricciardi says, like the time he basically called Gil Meche a loser because he signed with the Kansas City Royals instead of his own multiple-championship team in Toronto (Ricciardi’s team career record is 489-483 with zero playoff appearances in seven seasons). Or the time he ripped Adam Dunn for not liking baseball and then claimed to have apologized to Dunn even though Dunn insisted that he never heard from Ricciardi (at which point Ricciardi made some comment about how someone was PRETENDING to be Dunn, or something like that). Or the time he lied about B.J. Ryan’s injury and then offered up the classic, “They’re not lies if we know the truth,” quote.
No. Forget all that. Here’s my thing about J.P. Ricciardi, the thing that really baffles the heck out of me: How can someone keep giving out contracts THIS BAD and keep his job and reputation? I’m serious. How?
Obviously, you can start with the Alex Rios contract. You probably know that Rios has SIX YEARS and about $60 million left on his contract. And the guy is 28 years old and has a 94 OPS+ this year. He has a lifetime .335 on-base percentage, which is pretty darned mediocre. He has never hit 25 home runs in a season. He has not slugged .500 since 2006. He has been a good outfielder, but he even appears to be losing that. This contract is SO BAD that the only way for Ricciardi and the Blue Jays to escape it was to put Rios on waivers and have Chicago White Sox general manager Kenny Williams come in, like Bagel in Diner, and pay off his gambling debts.
I don’t know if the White Sox will get much for their money. They might get something … Rios, in that hitters’ ballpark and a new environment, might be revitalized and might have some good years. I wouldn’t bet on it, but it could happen and, again, some of the people I trust around the game say it will happen. But no matter what happens, that contract was so bad that the Blue Jays needed a bailout. If that was the only time it happened to Ricciardi, OK, everyone is entitled to a mistake. And you could see how the Blue Jays made this mistake: Rios was developed in the Blue Jays organization and put up a couple of pretty good years.
Trouble is, this is a frightening pattern for Ricciardi — B.J. Ryan. Vernon Wells. Frank Thomas. Just for starters. For fun, I put together an unofficial list of the worst contracts in the game. And, as you will see, Ricciardi’s name is all over it.
1. Vernon Wells (Toronto Blue Jays). Cot’s Baseball Contracts — the incredibly awesome site where I got these numbers from — is one of my favorite Internet stops. And on occasion, just for fun, I will go to the site just to look up Vernon Wells’ contract. I don’t know why. It gives me hope, somehow. It tells me that in this world, anything is possible. It tells me that good things happen, funny things, unexpected things. Don’t tell me that I won’t win the lottery … just look at Vernon Wells’ contract.
In 2011 Vernon Wells will get paid $23 million. No. Really. He will get paid $23 million.
In 2012 he will have to take a paycut and will only get $21 million. Same in 2013. And same again in 2014.
This isn’t a baseball contract. This is a testament to the power of mankind to do the impossible.
Oh, Vernon Wells also has a full no-trade clause in his contract. Well, sure, why not? Then, what difference would it make? This is the most untradable contract in the history of the world. Vernon Wells turns 31 this year. The Dewan has him a minus-29 center fielder, which means he’s exactly as bad defensively as you can be while a manager who is still breathing allows you to play centerfield. He has an 85 OPS+. He has a lifetime .329 on-base percentage. He’s slugging .408. He IS third in the American League in making outs. So he has that going for him.
And it never made sense. Ever. Wells had a very good year in 2003 (and he was a very good fielder then), a couple of OK years, a good year in 2006 at age 27. But he never got on base much, and he was inconsistent, and … then the Blue Jays gave him this hysterical contract: seven years, $126 million.
This deal, to be honest, is not the sort of thing that leads to a general manager getting fired. It’s the sort of thing that leads to entire villages getting pillaged. And that’s what I mean about Ricciardi. I mean, this contract alone should be enough to put him in the Bad Contract Hall of Fame. But when you look over the whole body of work … he IS the Bad Contract Hall of Fame.
In fact, really, we should just start referring to bad baseball contracts as “Ricciardis.”