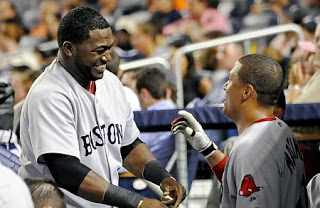 Loveable Big Papi’s a Steroid User
It has been several days since Boston Red Sox DH, David Ortiz, was named in a report of Major League Baseball players that tested positive for steroid usage in 2003. The backlash from fans and media has been quiet at best, a polar opposite of the scorching Alex Rodriguez took when it was alleged that he had taken steroids dating all the way back to his high school days.
Why no outcry about “Big Papi”? Well…he’s Papi. Big, loveable Papi! This is the fan favourite of Red Sox Nation. I went to a Nationals/Red Sox game a few years back. The fans would cheer pretty loud for Youk and Manny, but the biggest cheers were for Papi. He’s the adopted son of Boston. The teddy bear with the big smile and big bear hugs for all his teammates.
Alex Rodriguez? He’s a jerk. His teammates don’t even like him.
Did David Ortiz take steroids? Of course he did.
Papi offered us a rather dizzying and confusing half excuse/apology in a press conference last week, but few reporters have taken Ortiz to task and really pushed him for an explanation. Even after he publicly criticized players who had tested positive for steroid usage before the season began.
Talk about the pot and the kettle.
Ortiz’s steroid story is all about numbers. In the past 9 years, you would be hard pressed to find any noticeable differences in Papi’s physique. However, when you look at his individual statistics, the numbers reek of steroid usage.
As a Minnesota Twin in 2002, Ortiz had 20 HRs and 75 RBIs. As a member of the Red Sox from 2003-2007, Ortiz averaged 40 HRs, 120 RBIs, and routinely had a batting average above .300.
Starting last season, as MLB finally began to crack down on steroid testing, Ortiz hit 23 HRs.
This season Ortiz has 15. Papi didn’t hit his first dinger until mid May. Worse, his batting average is .219.
Those are classic numbers of a steroid user in Major League Baseball. A rapid rise in production, followed with an equally dramatic decline.
So enjoy the smiles and hugs while you can Papi. This time next season you may very well be watching the game from home.

How in the hell do you pronounce Jim Balsillie’s name? I’ve heard about 8 different versions…..Former NFL Head Coach turned journalist, Tony Dungy, has declared that Michael Vick will be picked up by an NFL team this season. My money in on Miami. Can you imagine Vick running the Wildcat offence?!……Jays game was fun tonight. Canadian Scott Richmond looked decent and Randy Ruiz, just called up from Triple AAA, hit a Home Run. The guy grew up 5 minutes from Yankee Stadium….too bad Hadeki Matsui and Jorge Posada ruined the party with back to back home runs in the 8th….Patrick Kane is slowly but surely getting off the hook in Buffalo. News out today that the cabbie he allegedly assaulted did not even have a driver’s license and has had two arrests for DUI…….news out of Louisville that Head Coach Rick Pitino had an affair with a waitress in 2003, impregnated her, then gave her $3000 to have an abortion…news that once again proves you have to watch sports with one hand squeezing your nose.
http://sportsillustrated.cnn.com/multimedia/photo_gallery/0908/mlb.remember.when.baseball.uniforms/content.1.html?eref=sihp. Great piece on CNNSI about baseball uniforms through the years. My favourite is the Houston Astros from the early eighties.