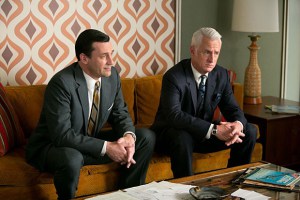 There is only one more episode of Mad Men left. Even though dramas like Dexter and Breaking Bad will air later this summer, I’m really going to miss Mad Men.

I don’t think there’s another drama on TV right now that I enjoy reading about, discussing and blogging about as much as this show.

“I’ve never seen anything like this before.” “I have.”

Last week, I wrote that I was disappointed in Bob Benson’s storyline. I wasn’t hoping for some big reveal that he was a psychopathic killer, or a mystery love child of Don’s. I just thought there was more to his character and his untruths than him being a closeted gay man.

Then I read this piece by Tom and Lorenzo. It’s lengthy, but I highly recommend reading it. I often enjoy their takes on the fashions of Mad Men, and how that symbolism gives us insight into the show. But here, they’ve taken a very close look at every Bob Benson scene there was (up until last week’s episode) and piece that together with what they know of gay culture in New York in 1968. I found it fascinating, and it gave me a better appreciation for the storyline than I’d previously had.

But this week, I didn’t need any help. To me, the idea that Bob Benson has created a persona for himself to escape an embarrassing, poverty-stricken background and to get ahead in the world was perfect. That Pete Campbell should be the one to discover it? I thought it was brilliant.

I appreciate the combination of intense similarities and subtle differences between Bob Benson and Don Draper. Their names are similar, and the scene where Pete confronts each man is quite similar. Don stole the identity of a dead man; Bob simply made something up and hoped for the best. Don is creative and magnetic, and moved up through the agency with good ideas and charm. Bob is the kind of guy who might not be creative himself, but loves to be around creativity. He’s moving his way up by being hard-working and becoming indispensable to the creative folk.

When Pete found out Don’s truth, he played his cards wrong. Pete looked like a petulant, disloyal brat and Don came out on top. This time, Pete learned from his mistake – something characters on this show so rarely do. Pete knew he shouldn’t try to outmaneuver Bob by trying to get him fired – even though it probably wouldn’t have been difficult. Doing so would have made Pete look as though he felt threatened by Bob, after already unsuccessfully trying to get Bob removed from Chevrolet. 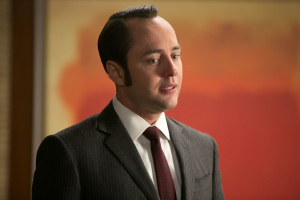 Instead, Pete made a power move. He told Bob that he knew, but that he’d do nothing about it. He only wants to be “off limits”. Pete has gotten what he wants – he’s on Chevrolet after Ken got shot – and now Bob Benson will walk on eggshells around him, too. He’s back on top. Pete has always been pretty despicable, but he’s a character that’s fun to watch and this scene was tense.

* The scene where Ken got shot while out hunting with the Chevrolet guys to “celebrate” his wife’s pregnancy was hilarious – even though you could see all the South Park jokes coming on Twitter from a mile away.

Pete wasn’t the only one making strategic maneuvers at work. Don got his head back in the game, at least momentarily, to try and squash Ted once and for all.

It’s interesting to watch the way Don’s relationship with Peggy somewhat mirrors his relationship with Sally. He has let Sally down, and at the beginning of the episode he’s a drunken mess. Later, he saw Peggy and Ted at a movie together. Don is jealous, and he reverses course and decides to let Harry’s deal with Sunkist squash Ted’s deal with Ocean Spray.

He sees how flirtatious Peggy and Ted are being – everyone can see it. (The look on Joan’s face as they flirted during a brainstorming session was priceless.)  Then in a meeting, he deftly embarrassed Ted (and Peggy) without the client knowing, and used the name of Ted’s dead colleague to get a commercial made. Don got everything he wanted, and the scene had me on pins and needles.

Later, Peggy was furious. She called Don a monster, and the episode concluded with him once again in the fetal position on his couch. He’s disappointed the two women whose disappointment actually gets to him. When will the self-destructive spiral end?

Sally had quite a bit of a storyline this week too, which always makes me happy. Several weeks usually passes between each episode, and since the incident with Don she’s avoided visiting him. The way Sally decides she can deal with her messed up family is to run away from them, and she requests to go to boarding school.

Sally called Glenn to bring booze, weed and cigarettes so she could impress the mean girls at boarding school. It was chilling to see how similar Sally can be to Betty at times. When Glenn went off with another girl and his friend hit on Sally, she said no. She said no several times, and then called to Glenn for help. But it was the way she said “He tried to force me,” that was so Betty-esque. You could tell Sally knew that she was over-exaggerating. She hadn’t been in danger, it was unfair to imply otherwise. The smile that came across her face when Glenn fought his friend in her defense was pure Betty. With a father like Don, of course she liked seeing a man stand up for her. 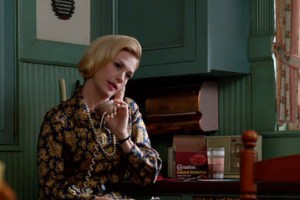 Later, the way she told Betty “My father’s never given me anything,” after Betty said that Don had probably given her beer, was again classic Betty. Kiernan Shipka looks quite a bit like January Jones, and she’s managed to really come across like a real daughter.

Take to the comments, guys! What did you think of the episode?