Update: The​ 31–year-old man wanted in relation to a September 2019 incident​ in Westphal was located in​ Cole Harbour​ and arrested by Halifax Regional Police on January 9.

The RCMP would like to thank the public for their shares and retweets on social media. 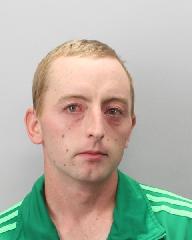 Halifax District​ RCMP have obtained a warrant for the arrest of a man who has been charged with offences related to an incident in September 2019 in Westphal.

William “Randy” McAllister, 31, of​ Dartmouth,​ is charged with:

McAllister is described as a​ white male, 5-foot-8 and 121 pounds, and has light brown hair and blue eyes.​ The charges are in relation to a​ Break and Enter to a business​ and subsequent seizure of cocaine that was reported to the RCMP on September 30, 2019. A warrant for his arrest was issued by the courts on October 30.​

Halifax District RCMP is asking anyone with information on the whereabouts of William “Randy” McAllister​ to contact them at 902-490-5020.​ Members of the public are asked to​ not approach McAllister if he is located, and call police.​ Should you wish to remain anonymous call Nova Scotia Crime Stoppers toll free at 1-800-222-TIPS (8477), submit a secure web tip at www.crimestoppers.ns.ca, or use the P3 Tips App