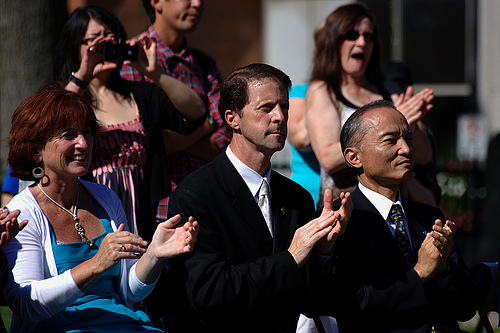 (Tuesday, Oct.  25, 2011) – Mayor Peter Kelly today urged occupiers of the Grand Parade to clear the public square as HRM prepares for upcoming events.
“We have respected the protesters’ right to peaceful assembly, they have made their issues known, and now it is time for them to return the Grand Parade to the people of HRM,” said Mayor Kelly.
The Mayor set an expectation that the Grand Parade will be vacated by no later than Sunday, Nov. 6 at 5 p.m., which will allow time for clean-up and preparations for significant public events, including the Nov. 9 Dignity Day Ceremony, hosted by the Atlantic Jewish Council, and the Nov. 11 Remembrance Day ceremony.
Remembrance Day is the largest annual ceremonial event in HRM drawing more than 5,000 veterans, service people, and members of the public to the Grand Parade.
“The Grand Parade is a public space for all of our citizens. Its occupation by one group subverts the notion of the Grand Parade as a space that exists for all,” said the Mayor. “We have respected the Occupy movement’s right to peaceful protest; we now urge them to respect the right of others to assemble here.”
Following Remembrance Day HRM will move immediately into one of the busiest periods of the year in the Grand Parade which includes maintenance and set-up in advance of holiday season events. The Mayor said the municipality will work with the protest group to accommodate them in another venue if that is their wish.
“We are hopeful that the occupiers will return the respect that the citizens of HRM have shown to them, and that they will provide us with the assurances we require to meet our obligations to host important upcoming public events,” said Mayor Kelly.
Source: Release