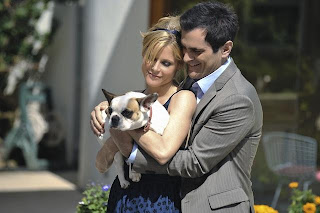 Once again, Modern Family delivered a laugh-out-loud funny episode. With the whole gang gathered together for Alex’s middle school graduation, there were just so many hilarious gags and jokes that reminded me why this is one of the best comedies on TV, with one of the best ensemble casts.

First, let’s talk about Phil and Claire. Phil wanted Claire to have an emotional breakdown on the day of Alex’s graduation so that it would be over with and wouldn’t interfere with his trip to Vegas with the boys that was scheduled for the next day. But Claire held it together, until she and Phil got stuck – like, physically stuck, because the gate was broken – at Jay’s and it looked like they’d miss the whole ceremony, and Alex’s valedictorian speech.

Meanwhile, Haley tried to save Alex from social suicide by convincing her not to deliver a great big middle finger of a speech to her classmates, Cam freaked out after Mitch completely understandably laughed at his expense, and Jay embarrassed himself by getting Botox. The episode was such a great mix of physical comedy and razor sharp quips, I’d like to watch it again just because I’m sure I missed a few jokes while I was laughing. 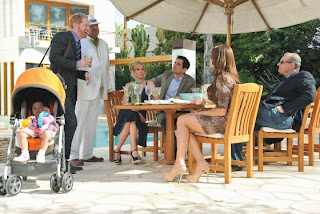 Watching Cam fall face first into Lily’s inflatable baby pool was one of the funniest things I’ve ever seen, but the writers managed to make it even funnier by having it spark a disagreement between Cam and Mitch. Mitch thought it was funny, Cam thought he shouldn’t have laughed. Later, when Cam walked face first into a glass, and then screen door, Mitch, Claire and Jay all laughed. I think I would make a good Pritchett.

Of course, Cam lost any leg he could have tried to stand on when he had to stifle a chuckle during Alex’s graduation after Claire and Phil hopped a fence and tumbled all the way down a hill, Jack and Jill style. It was the kind of thing that makes me love this show so much – everyday conflict that is simply hilarious, but never makes you feel like the characters don’t belong together.

Jay’s Botox job gone wrong was just as hilarious. His face went all droopy and weird and everyone thought he was having a stroke. I got such a kick out of watching him try to hide the embarrassing truth from everyone. And Phil and Claire got some truly funny moments as well, especially when Phil threw Claire over Jay’s gate cheerleader-style, and the sight of them riding a tandem bike to the graduation.

Amidst all the comedy, there was heart, too. I’ve always loved the relationship between Haley and Alex, and I like how the show has made some subtle changes to it as the characters grow up. They’re very different, but as they get older they’re coming to accept each other. It nice to see Haley acknowledge that she’s a little jealous of Alex, that she has her own insecurities, and it was nice to see Alex kind of grow up and realize that her big sister doesn’t have it all going on.

The final scene was so great – Alex bailed on a family dinner because she’d been invited to a party after delivering the cliched speech Haley told her to make, rather than the bitter, self-righteous one she’d prepared. For Phil and Claire it was a sign that they were losing their baby to the horrific teenage years, but for Alex it was an important moment of acceptance. The way they smothered Haley when she nonchalantly said she was hungry (and therefore, wouldn’t mind eating dinner with the family) was hilarious. Such a good moment.

There were so many good lines and moments, this list of highlights is going to be incredibly long and probably won’t even scratch the surface. But here goes:

So, what did you think of “See you Next Fall?” I thought the episode was so strong, I’m surprised it wasn’t the season finale – but we’ll still be treated to one more Modern Family episode next week, and then we’ll see them next fall.